We Captured the Honeybee Swarm With an Empty Hive

We placed several empty Warre-style hives around our property, and incredibly, we had the good fortune of capturing our honeybee swarm! (If you missed it, see the article about our swarm - we had no idea what was happening!) It was interesting to see which of the three empty hives they picked. They liked the smaller one (less space to defend perhaps) that was in the best shape (who wouldn't choose the house that needs the least fixing up, right?). 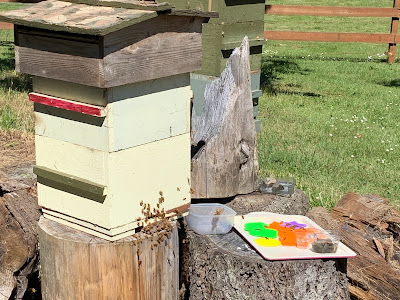 Now that the swarm has moved into their new home, we've been thinking about what they might need. I contacted our local beekeeper's association for advice, and as I suspected, they suggested giving them food. But, how do you put food in a Warre-style hive? We honestly had no idea. The feeders that work in a Landsthroth hive don't fit a Warre hive. It began to feel like we were back at square one learning about how to care for bees! But fortunately, I found a video that showed using a glass canning jar, poking holes in the lid, turning it upside down, and putting it in the top of the hive (in an empty box that the bees can't get into). Screen separates the top box from the one below, so the bee food (sugar water) can drip down into the next box. We got busy today and put together the jars, as you can see below. 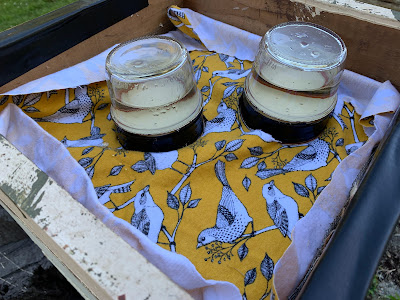 To ensure a gap exists between the lid and the screen, we duct-taped an extra canning jar rim to the top, so it has two rims duct-taped together. 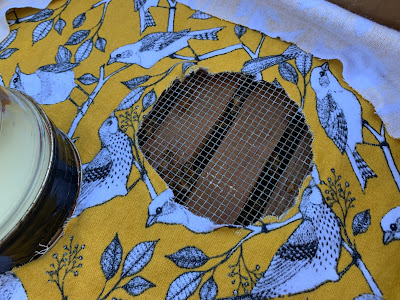 We'll check the level of sugar water tomorrow to see if enough is dripping out to provide them with nourishment. I also put some water with rocks near the hive in case the bees are thirsty. The bees stand on the rocks so they don't drown in the water while drinking.

I missed seeing the swarm going into the hive yesterday. However, my husband was here and noticed it happening. He was in the garage, not far from where we set up the empty hives, and he heard a loud buzzing noise outside. He went out and could not even get close to the empty hives because a bee cloud (a bee storm) was occurring in that general area. Bees filled the air and flew in wild, crazy circles around where the hive was placed. There was a deafening noisy hum coming from them. I think that as the swarm flew down from the top of the deodar cedar and went over to the hive, they probably changed from being a compact swarm surrounding the queen into a loosely circling cloud. Then, over an hour or less, the cloud dissipated into the hive. At that point, the hive looked occupied with bees going in and out in a normal pattern.

Today when I fed the bees, I could hear a loud humming noise inside that sounded like a full hive of bees. To feed them, I had to lift the top box off and noticed there were a lot of bees in there. I don't want to say we captured a swarm because they chose where to live. We just offered a suggestion.

Incredibly, we started out with two beehives this year, and now we have three. I wonder if the other hive that hasn't swarmed yet will do so soon? It also had a lot of bees inside. If they do, we are now prepared with two more used empty hives to suggest to them.