Our Honeybees Are Swarming! Where Will They Go?

We heard a loud buzzing sound outside the front window where I sit at my computer working (I work remotely), so I went outside and saw thousands of honeybees zooming wildly in every direction in the garden near the hives. Ten thousand square feet of garden space covered in a cloud of honeybees! The air was filled with the insanely flying bees, it was like a bee storm! They absolutely NEVER act like this. We couldn't get close to it because they were out of control. Eventually, the bee storm died down, but the loud buzzing noise continued. Perplexed, I walked around, trying to figure out what was going on. The noise was overhead, and as I looked up, further and further up, to the very top of our deodor cedar tree (about 100 feet or more), I saw the swarming mass of bees had moved up there! They were in a loose swarm, flying in circles near the top. I managed to get the whole experience on video, from the moment we saw the craziness going on in the garden, to when the swarm formed at the top of the tree.

But I should also mention what happened yesterday. Yesterday, during the hot part of the day, we saw about 5,000 or more bees clustered on the front of one of our hives. The bees were doing something called "bearding," which refers to how they look like a beard on the front of the hive. Sometimes, bees do this because it's too warm in the hive, so they send some outside, allowing the remaining bees and the queen to cool off indoors. Other times, the bearding occurs because the hive is getting ready to swarm. 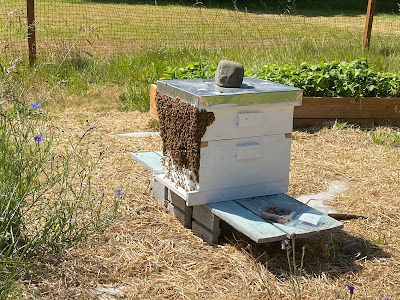 Thinking they were just too hot, we added another empty box to the hive, placing it in the middle. I think our efforts were too little too late, since the swarm then happened today. 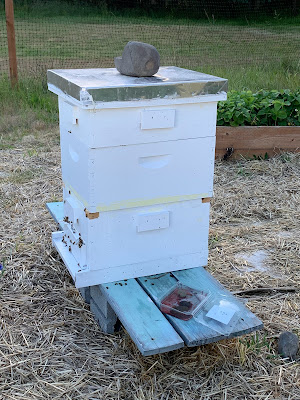 Coincidentally, one of the members of our local beekeepers association had offered up several used Warre hives for sale. I had been considering purchasing them and even reached out to her a few days ago. With our bees bearding, this morning I asked my husband to see if she still had the hives, and if so, to go pick them up. Fortuitously, she had them and sold them to us at a bargain. My husband brought them home. Later in the day, I noticed the noise outside and we discovered the swarm. It was just as I finished working for the day (I am finished at 3pm), so how lucky is that?  We went out to the truck, which was parked next to the house, and I unloaded the hive parts. Hundreds of honeybees were going nuts all around us as we worked. They clearly liked the smell of those used hives. Old honeycomb was still attached to many of the frames and the boxes had propolis (a special glue-like substance that bees make to help seal up their hives) all over them. All the favorite smells for a honeybee!

There were enough parts to make 3 separate hives. We set up two of them not far from the truck since bees were already right there. The other hive we put in the garden area since it's fenced and is below where the swarm is located. 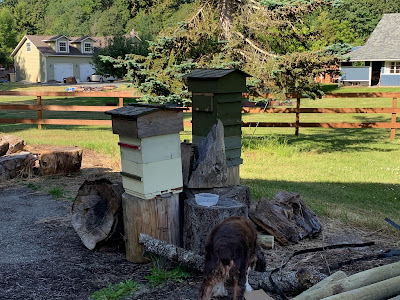 Then, I went into the house to get some burr comb that I'd saved from a recent hive inspection. I should explain that part: Whenever the bees build extra comb on the inner lid of the hive, I have to scrape it off in order to close up the hive again, since it's in the way and bees will get squished otherwise. Well, no sense throwing away that burr comb since it's usable. I save it in a container in the house. It sure came in handy today! The bees loved the smell of it. The cells of the burr comb still have nectar and pollen inside them. I put a few pieces of the sticky sweet burr comb inside each hive. Then, to make each hive even more enticing, I sprinkled a few drops of Young Living lemongrass essential oil (their essential oils are very pure, and bees love the smell of lemongrass - it is known to attract a swarm) on the entrance to each hive and inside on a few of the frames.

Here's the second video I recorded after we got the empty hives set up:

It was hard to handle the equipment with bees going in and out of these secondhand hives all the while. I was wearing a tank top and shorts, with no protection at all. Even so, the bees were intent on what they were doing and were not interested in me. Mostly, I just needed to watch out that I wasn't in their flight path because occasionally they crashed into me. Twice, bees got stuck in my hair and it was an ordeal to untangle them. That's never a pleasant experience to realize a buzzing bee is caught up in your hair, its wings and legs working furiously, with its stinger likely aimed right at you.

Later in the day, I recorded an update after learning more about honeybee swarm behavior:

I guess it takes 1-2 days for a swarm to "vote" on their new home and move in. All the bees get a vote! Talk about a democratic society. If they are undecided (a tie occurs) on the first day, or they can't find a viable home yet, they hang out into the second day. They remain clustered tightly around the queen to keep her warm overnight. I guess bees on the outside of the cluster have the misfortune of possibly getting too cold at night and perishing.  Long live the queen! The workers, scouts, nurse bees, and all the others give up their lives to protect her. I'm hoping that they vote for one of the 3 hives we just set up for them tonight, and move right on in before it gets cold. It does get chilly at night around here.

The two hives nearest to the truck have seen the most interest. I'm pretty sure all 400-500 scout bees have been in and out of both of those hives several times! It would be fun to see the swarm moving down from the tree and flying together in a cluster over to their home, but I'm not sure we'll happen to be outside when it occurs. I keep going out to look.

It's almost 10pm as I publish this...the bees are still up at the top of the tree. It looks like they are waiting until tomorrow. Goodnight little bees, I hope you stay warm up there.