Taking Care of a Miniature Horse 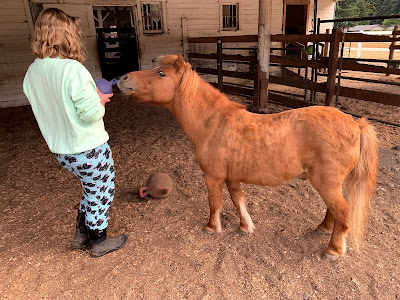 You may recall Reggie the Miniature Horse from our holiday posts, such as the Fourth of July parade or his Merry Ho Ho visit at Christmas time.  Reggie is a joy to hang out with.  We recently had the pleasure of taking care of him and the barn cat, Barney, for a couple weeks while their owners were camping. 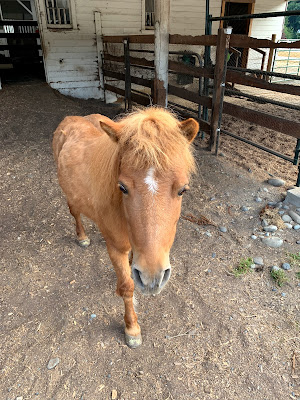 In addition to giving Reggie his food every day (he eats part of a flake of hay morning and evening, along with a couple treats, like half a carrot or an apple), our daughter also made sure he had adequate water, cleaned out his stall, and we brushed him.  We also had social play time with Reggie each day. 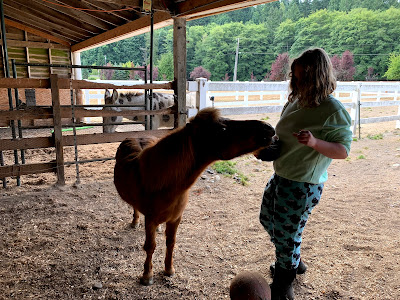 Miniature horses are amazingly bright and spirited. We loved hearing his excited neigh when we entered the barn.  It was also fun to play ball with him and encourage him to interact with us when giving him his treats. 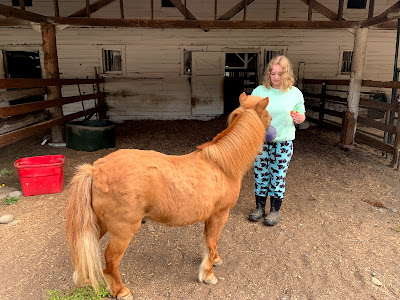 Did you know that there are many animals that enjoy music?  We decided to experiment with this when we were taking care of Reggie. Would he enjoy music as much as other animals we've seen? An example that we've come across on YouTube is this golden retriever that bobs his head to the rhythm of the music when his owner plays guitar:
Cows adore music, apparently.  Here's an example we came across on YouTube:
What would Reggie think of guitar and singing?  Our daughter decided to give it a try.  She played a couple songs, one of which was Blackbird from The Beatles.  We noticed that Reggie's ears perked up and he stayed next to her, eating his meal, while our daughter played. 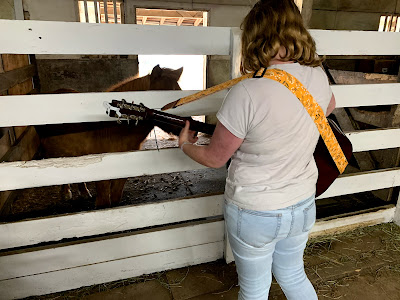 None of the barn animals seemed to mind the music, although they didn't get as into it as we had hoped.  Patch the donkey is sometimes timid when it comes to new experiences, and as we predicted he decided to go outside, but he wasn't alarmed or scared at all.  After a while he came back in and seemed curious.  Mocha the horse stayed inside, perking her ears, and at one point she kicked the stall to get our attention.  Although she does that when she's hungry, too...