Today when I was in the garden I noticed that my bok choy is starting to bolt, and I was wondering if the flowers are edible.  The flowers haven't opened yet and they look very similar to broccoli florets.  After some research, I learned that indeed all parts of the bok choy plant are edible including the flowers.  The flowers are best eaten before the petals open.  Interestingly, the bok choy flowers not only look like broccoli, they also taste like broccoli. 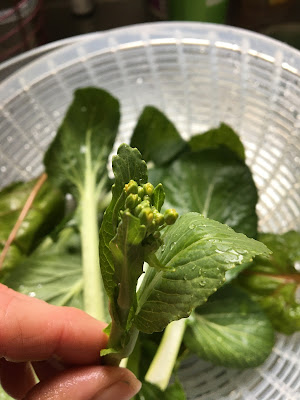 Last March, I had written about brussels sprouts flowers being edible.  Kale flowers are also edible and we have been eating lots of kale flowers over the past month as the row of kale plants has bolted as well.  Our kale is providing a long season of delight, as we enjoyed many months of tender kale leaves, followed by kale florets, and now our honeybees are buzzing all over the bright yellow kale flowers that have opened. 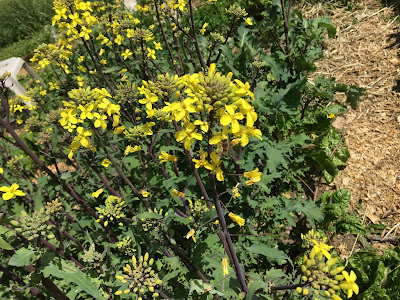 It seems that most (if not all?) plants in the brassica family have edible flowers.  The closed flowers taste great in salads, quiches, mac and cheese, omelets, soups, and hidden in all sorts of other savory dishes.  They're yummy on their own, too - I have been spotted many times in the garden standing over the brassicas munching on their tightly-closed flowers.

Our weather here has fluctuated from warm to cool several times which prompts a lot of these cool season plants to begin to flower.

There's someone else who enjoys the brassicas from the garden.  As I'm harvesting, I remove any leaves that don't look as nice and toss them into the wheelbarrow for giving to our mixed flock of chickens and ducks. 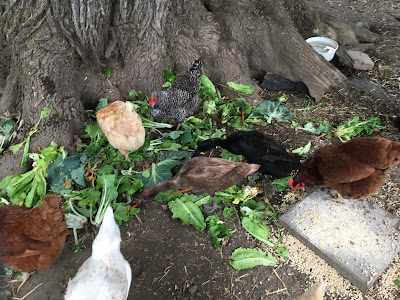 This morning, they were given a wheelbarrow full of outer leaves of lettuce and cabbage, along with the less desirable looking leaves of spinach and bok choy.  I also picked off the tops of the parsley that was starting to flower and gave it to them.