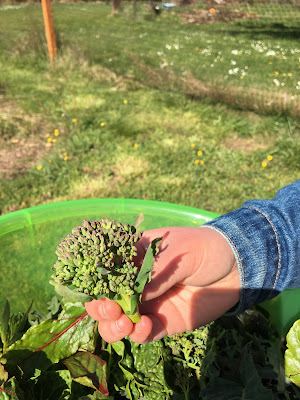 We noticed that the flowers not only look like broccoli but also taste similar to broccoli, too. However, we do know for sure that these are brussels sprout plants and not broccoli because we have been watching them form the sprouts and have picked a few off the plant to eat.  And of course, I also kept a record of these when I planted them.  Below you can see the sprouts forming on the plant earlier in the year. 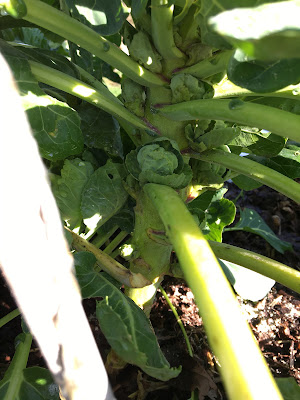 Unfortunately, our sprouts never did very well in the garden. I think it's because we waited until early fall to get them planted and we should have planted them in mid-summer.  Now that it's spring, the weather has gotten quite a bit warmer and it's been dry, which are conditions that stress the brussels sprouts and caused them to decide to bolt.
Today for dinner I chopped up some of the smaller brussels sprout leaves and added them to the ground turkey that went into our tacos, stirring the chopped leaves in once the meat was mostly cooked.  Since I had also added a number of aromatics to the meat - garlic, chili powder and cumin - no one even noticed that there was chopped brussels sprout leaves in there.  And that was despite the fact that I'd added two cups of the chopped leaves!  The flavor of the leaves was very mild when cooked this way.
My daughter ate a couple of leaves raw and then munched on some of the flowers.  "These are great plain," she commented, grabbing another handful to snack on, "But they'd also taste good with ranch dressing." Based on that input, I hightailed it back outside and pick the remaining flowers off the plants for the family to enjoy eating later.
After the success with cooking the leaves in the taco meat, before dark I went back out to the garden once again and picked a ginormous bowl of brussels sprout leaves.  I avoided picking the larger leaves at the bottom of the plant, and instead just picked the smaller leaves toward the top.  Usually larger leaves have a bitter taste on most cruciferous plants.  Once inside, I rinsed and then chopped the leaves up and blanched them for 15 seconds, submerging them in ice water afterward.  Then I tasted a few of the cooked leaves. They tasted sweet and just like broccoli!  I was so pleased.  I divided up the blanched leaves into small portion-sized baggies for freezing.  They'll get used in soups and stir fry over the next few months. 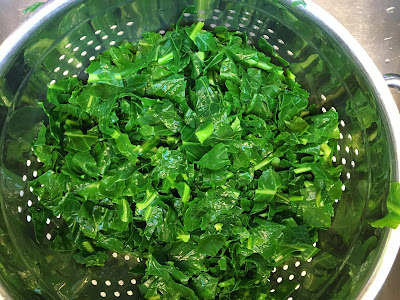 Brussels sprouts are a great source for fiber and phytonutrients, protein, vitamin A, vitamin C, vitamin B-6, thiamine, folate and manganese.  All good reasons to try to eat this plant, even though it's now bolted!
While every part of the plant is edible, I would avoid eating the stems and the bigger leaves because they will be tough and won't taste so good.  Also I wouldn't recommend eating the flower once it has opened all the way, because the flavor will change then, too.  Pick the flower while it still looks like broccoli.  If it has yellow flowers on it, then you waited too long -- at that point, it's best to let the bees and other pollinators enjoy the flowers instead.
Sometimes, for some people, too much cruciferous vegetables like brussels sprouts can cause bloating or other mild digestive issues.  As someone who should follow a low-FODMAP diet, I've had success in taking a digestive enzyme like Beano at the time of eating cruciferous vegetables, and it's helped me avoid experiencing bloating or any other digestive discomfort. You might consider a digestive enzyme like Beano if you're going to consume a lot of hardy leaves like this.
Tomorrow, our chickens will be getting all the rest of the plants, which includes the lower leaves and the stalks.  The chickens will have fun digging through a big pile of torn out plants from the garden.  Apparently brussels sprout leaves are a nutritional food for chickens, as well.