Our good friends Dan and Debbie enjoy foraging for chanterelle mushrooms. Yesterday, on Dan's outing into the Sol Duc forest, I felt very fortunate to be invited along. I had been hoping to have an opportunity to experience mushroom foraging out in the forest, as until now the only mushrooms I have foraged are the horse mushrooms that grow in our pasture. Safely identifying wild mushrooms in a forest is quite a different experience. 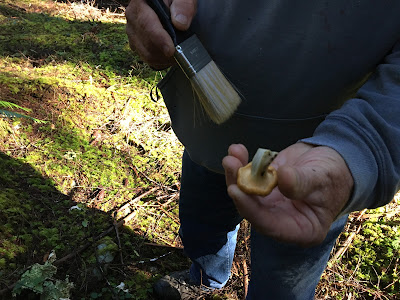 Before going, I researched how to identify chanterelles in the Pacific Northwest as well as how to avoid picking similar-looking mushrooms, including false chanterelles and the more toxic Jack-O-Lantern mushrooms.  There are many great articles online with photos to help identify chanterelles (here is one from Practical Self Reliance that I found especially helpful), but even with photos and written descriptions to refer to, I was ever so grateful to be able to have an experienced forager there to verify.  While most of the online photos of chanterelles show the bigger, more mature mushroom, we were finding smaller, baby chanterelles that were just poking their way through the forest floor.  The younger age of the chanterelles made them more difficult to identify. 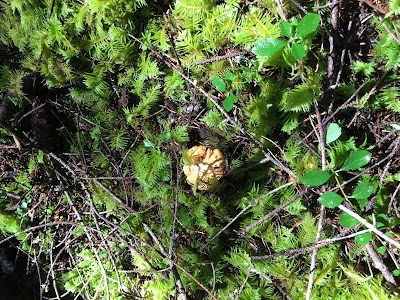 For me, the most remarkable aspect of foraging in a forest is the fact that we left the trail. After driving about an hour out of town and going past Sol Duc Hot Springs we turned onto a forest service road.  Several miles further, we parked in a wide spot in the road where there was a trailhead.  The trailhead provided an access point into the forest, but we didn't stay on the trail. We just walked right out into the woods, going across the forest floor. 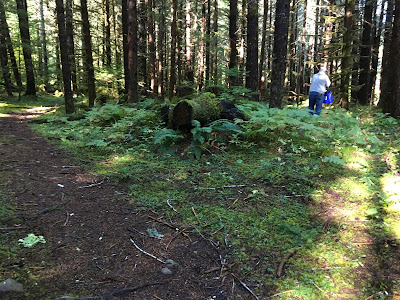 As we walked across the spongy blanketed surface of the forest floor, we stepped on moss, twigs and brush and climbed over fallen logs. Our feet tangled in ferns and vines. We had to be careful where we put our feet. 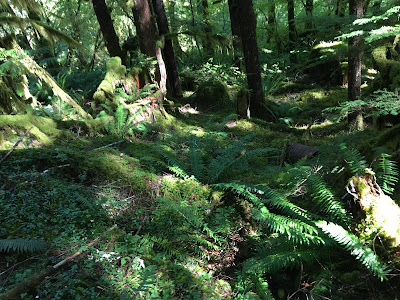 It's very easy to get lost in the forest, especially if you go off the trail. We came prepared.  My backpack was filled with "just in case" items - about 20 pounds worth. First aid supplies, food, water, jacket, knife, mace, lighter, phone, EPIRB (Emergency Position Indicating Radio Beacon).  Dan also had a GPS, which I found immensely reassuring.  While Dan knew where we were, within a few minutes of parking the car and leaving the trail I was completely lost.  It seemed to me we were walking randomly in circles while hunting for chanterelles.

I wasn't worried since I was with an experienced hiker and forager.  It was so much fun to look for the chanterelles, especially since we were finding some.  Here and there, as we poked along, were small chanterelles, and carefully we cut them from the ground, brushed them off and put them in our bags. 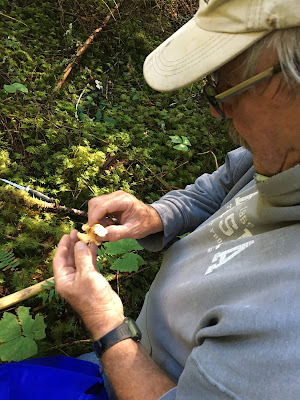 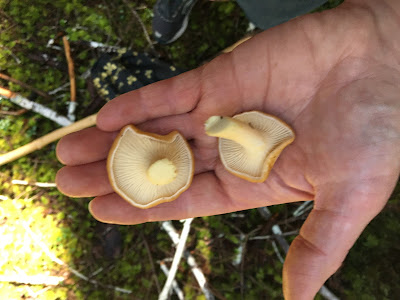 An hour into our trek, we stopped next to the Sol Duc River to take a break.  I had no clue where we were in the forest nor how to get back to the car - it would have been unsettling had I not had someone with me who knew his way around a forest.  We talked about our location, and that's when I realized that our path wasn't random after all; we had been traveling in between the road and the river. Suddenly everything came into focus as I realized these larger landmarks provided an easier way of keeping track of where we were. 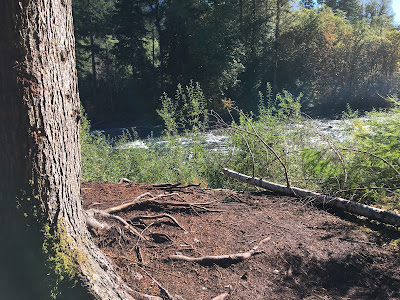 While I still wasn't entirely certain of our location, I was slightly less lost and could pick my way back to the car.  Dan had not been lost at all; he guided us back to the car with ease.

After arriving back home, I wiped off the mushrooms and placed them on a paper towel. 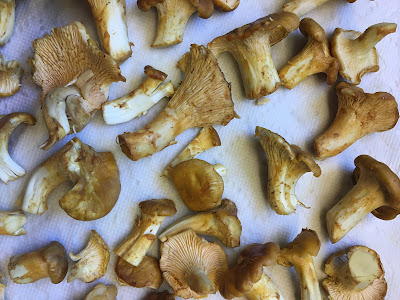 That night we ate the mushrooms with our dinner. As Dan had suggested, we dry cooked the mushrooms in a pan first (our sauté pan is stainless steel), cooking them at a medium-low heat until all the moisture had come out of the mushrooms and the liquid had dried in the pan. Then we added some thinly sliced garlic and olive oil to the pan and continued cooking the mushrooms at a low temperature until the garlic was tender (about 2-3 minutes).  We served the mushrooms over slices of pork tenderloin that I had roasted in the oven.  Alongside, we had potatoes and corn on the cob from the garden.
The chanterelles had a wonderful mild flavor that everyone enjoyed. We will definitely be out looking for chanterelles again!