February 27, 2020
The ingredients on this sheet pan were so colorful that I had a need to share it.  It's one of the easiest ways to make meals that incorporates fresh vegetables with herbs and olive oil.  Sheet pan suppers! Simply slice veggies into smaller sizes that will cook quickly, then rub olive oil on everything, spread it out across a pan, sprinkle with your favorite herbs and seasonings -- we enjoy rosemary, thyme, garlic powder, onion powder, pepper and only a little bit of salt -- and then bake at 375 degrees for 20 minutes or so.   After 10 minutes in the oven, use a spatula to turn and mix the veggies a bit so that they can brown on both sides.  As soon as the veggies are tender and your meat is cooked through, remove and enjoy! 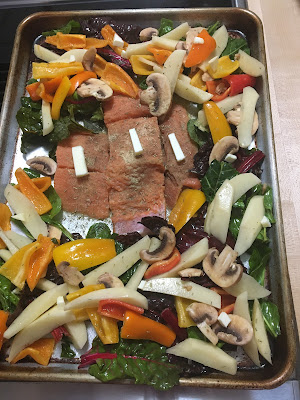 Our latest version of the sheet pan supper included several salmon fillets (given to us by our neighbor, Brian, who is an avid fisherman).  I added potato spears, mushrooms, tri-colored sweet peppers, and believe it or not freshly cut spinach and swiss chard from our garden. That's right, my garden is still producing. I've got tender leaves of kale growing out there, too.  These amazing greens over wintered, surviving several feet of snow, and now that the sun is shining today in our neck of the woods here in late February, the plants have new growth.

Also, did you know that you can turn a pumpkin into fries?  This works well with pumpkins that are getting kind of past their prime because they are easier to cut.  Peel and gut the pumpkin and then cut it into spears.  Rub olive oil on the the spears, sprinkle herbs like Rosemary on them, and then bake at 375 degrees...and you'll have pumpkin fries!  We had several pumpkins left over that I didn't know what to do with, and I wanted something healthier than pumpkin pie.  Baked pumpkin fries are really very delicious.

We have also been enjoying salad with our dinners.  Instead of buying pre-washed bagged salad from the grocery store, I've been making my own version.  It's far cheaper and the salad mix is incredibly fresh and crisp this way. Into my bagged salad that I make once a week, I shred up a half-head of green cabbage, a little bit of red cabbage, a couple of carrots, romaine lettuce, and also fresh chopped cilantro.  No fuss about a recipe, just add however much of each according to your preference until the mix looks good.  Toss it all together, put it in a bag and keep in the salad crisper drawer for ready-made salad any time. 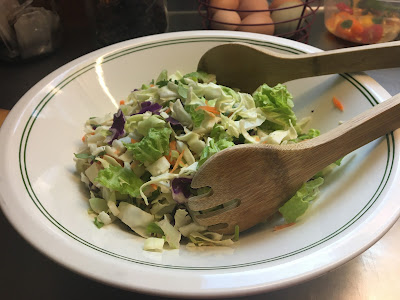 A couple tablespoons of homemade salad dressing and a sprinkle of sunflower seeds and alfalfa sprouts on top, and this becomes a salad the family will enjoy eating pretty regularly. I think my favorite ingredient in the salad mix is the cilantro. 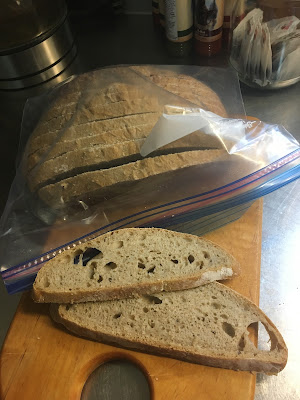 We are also still trying to eat homemade bread instead of store bought.  Most of the time I make  sourdough - I've started following some of the steps for full proof sourdough that our friend Stuart recommended to us and we are loving the bread more and more mainly because this version of sourdough is less dense.  Although, I don't bake my sourdough as long as they suggest, because we like the bread to be moist in the middle.  Each loaf is like a science experiment using the sourdough starter that is growing on my counter.  It's hard to believe that the only ingredients in this recipe are flour, water and a little bit of salt.  We use half whole wheat flour and half white.  I make a loaf of bread at least every other day.

Our kombucha is coming along.  The third batch is brewing.  We've been doing a second fermentation upon bottling it by adding homemade blueberry ginger syrup.  The result is quite wonderful. 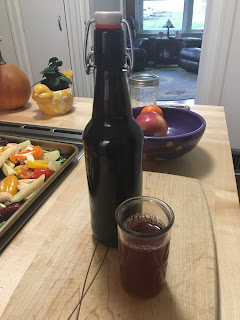 One step that I started doing with the kombucha now that I'm brewing it again, is to strain it once it's done with the first fermentation.  When we used to make it in the past, we kind of got grossed out by the floating bits in it from the scoby.  Yes, I know that those floaty bits are healthy and we're better off drinking them because they are full of probiotics, but they are just weird and we have a hard time drinking it down.  Besides, there are plenty of probiotics in the rest of the brew.  So, I reserve about a cup of the brew first along with the scoby, and then using a mesh strainer with cheesecloth inside the rest of the brew gets strained in order to remove anything left over from momma scoby.  Then into the bottles the brew is poured, leaving a good amount of headroom for the blueberry ginger syrup and also extra airspace so the bottles don't explode.