March 14, 2018
I recently decided to brew my own Kombucha after coming across this magical elixir in a health food store and realizing how expensive a habit it could become. In most stores, it can cost $3.99 for a small bottle.  If you were to drink several bottles of this brew each week, the cost would really add up.  Brewing Kombucha is incredibly easy and affordable, as it requires only a few simple steps and relatively inexpensive supplies. It's the unusual aspects of Kombucha that shrouds it in mystery, giving the impression of it being difficult.

The greatest mystery involving this unusual brew is the scoby.  Scoby is an acronym for Symbiotic Colony of Bacteria and Yeast.  A scoby grows on top of the brew and is what causes it to ferment.

Take a look at the scoby that is currently growing on top of my latest batch. 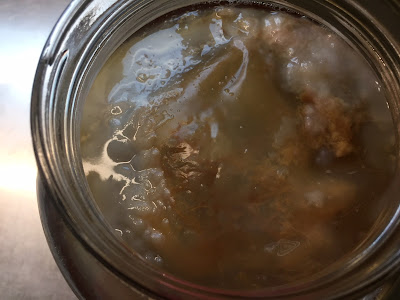 Now, I realize you're probably thinking, Eeeeuuuwwww!  A scoby is indeed an odd looking creature growing on top.  Some people might hesitate to drink the tea underneath.  However, once you realize what this brew contains, you may consider it again and give it a try.

Kombucha is made with tea that has been fermented, and so it is chock full of probiotics, polyphenols and antioxidants.  To make it, you start by brewing a large pot of strong tea.  I prefer using organic black tea, such as English Breakfast.  Next, add white sugar.  The sugar will disappear as it is eaten by the yeast, and so you don't need to worry that this will be a sugary beverage - indeed, it is not.  Let the tea and sugar mixture cool to room temperature, and then add some pre-made, plain Kombucha, which is the starter tea.  It's also ideal to add a scoby.  Like making yogurt, Kombucha requires a starter (in this case, the pre-made tea and scoby) to get it going.  I purchased a scoby online and a bottle of plain Kombucha to get my operation set up. For the ratio of ingredients, a guideline I follow is 1 cup of sugar to 1 gallon of water and 8 tea bags, plus 1 cup of starter tea and a scoby per batch. 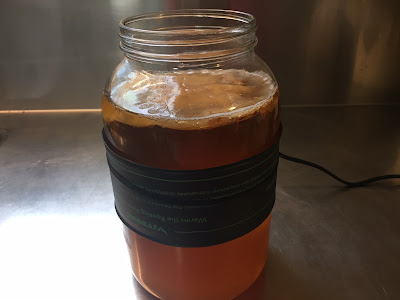 Since my kitchen has been fairly cold this past winter, I also purchased a warming pad that goes around my brewing jar and keeps it 10 degrees warmer than ambient temperature, although this isn't really necessary. It will just brew more slowly if it's cooler in the room. One other important step: put a cloth over the top and rubber band it in place. This prevents fruit flies and other things from ending up in it, but at the same time allows the brew to breathe, which is essential.

As the Kombucha is brewing, it will grow a new scoby.  So, at the end, when you are bottling your finished Kombucha, you will have an extra scoby.  This allows you to make two batches next time.

Below are samples of my first two batches of Kombucha.  My first attempt was just a plain Kombucha. It's the glass with the yellow colored beverage.  I brewed a gallon of Kombucha in that first batch.  For my second batch, I decided to add a flavoring after it was done, and so I made a blueberry ginger simple syrup to add to the plain brew during the bottling. Both were delicious. 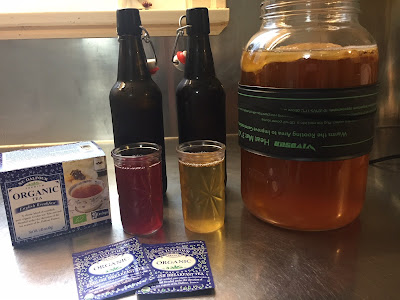 Bottling Kombucha is pretty easy.  You can use a plastic funnel to pour it, and all that is involved is pouring the brew into clean glass containers. Be sure not to use anything metal when working with or storing your Kombucha, as the fermentation creates some amount of vinegar in the brew that will react to metal.

The hardest part for me in brewing Kombucha is keeping up with it.  Once the brew is done, I now have an extra scoby and so I'm compelled to make two batches next time.  From those two batches, I then have four scoby's when they're done...then from four batches I'd have 8 scoby's...and so on.  I have no use for that much Kombucha, and so my chickens get to eat the extra scoby's.

You should have seen the fight in the chicken coop when I threw a scoby in there.  One chicken picked it up and took off with it, and the others took chase. It was a game of keep away for a bit, until the carnage occurred and they started tearing the scoby into pieces.  They gobbled it up quickly. I've noticed that my sick chicken is on the mend since eating a scoby.

Okay, so I bet you're wondering what the fuss is all about.  Why drink Kombucha?  I have found that drinking Kombucha helps my stomach to settle. I have a very sensitive stomach and ongoing digestive issues that have bothered me since I was a teenager.  Kombucha has a soothing effect on my tummy, and I also experience a boost of energy from the beverage. I've done my research on the health benefits, and am impressed with it. Once finished brewing, Kombucha contains B-vitamins, active probiotics (beneficial bacteria and yeast that are good for gut health), lactic acid, vinegar, a very small amount of alcohol, antioxidants and other compounds that have health benefits. Many consider Kombucha a superfood and believe that drinking it regularly can help boost the immune system, reduce risk of cancer and other diseases, and improve liver function. Sounds good to me.