Stocking the Root Cellar and Freezer

August 22, 2018
In keeping with the desire to build a homestead, one of the goals this year was to put in a large enough garden that we would be able to stock our root cellar and freezer with our own home-grown produce.  The shelving that lines the walls caught my attention when we bought this old house and the dream began. It took considerable effort to clean out the cellar, including sweeping out years of cobwebs, removing boxes of junk left in there by the former owners, and scrubbing the floors and shelving.   I'm pleased with our progress in restoring this home's cellar to its intended purpose.  Jars of home canned produce are now beginning to take up storage in there. 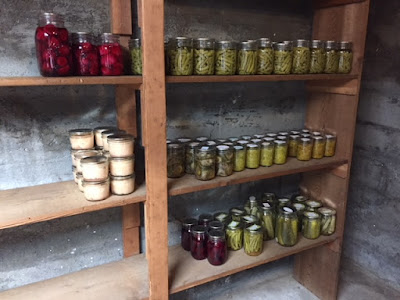 So far, I've canned green beans, beets, applesauce, a variety of different types of pickles, and zucchini relish. The apples on our old apple tree just ripened and so there will be lots more applesauce coming to the shelves soon. The beets are also still going. I've canned both plain beets and pickled beets -- the pickled beets have whole cloves and whole allspice in the jars, and in preparing them I used a whole cinnamon stick. I think I enjoyed making those the best.

In the freezer, there are more green beans, along with berries, sliced apples, pie cherries, bing cherries, grated zucchini and kale. 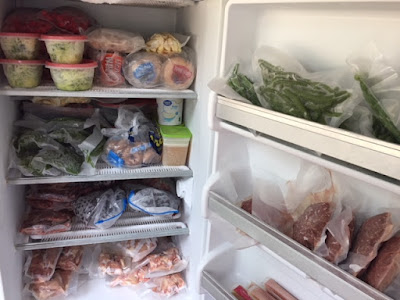 The zucchini has been producing way more than I can handle, and so I've taken some in to work and have been feeding them to the chickens.  The chickens eat the whole thing - put a zucchini in the coop and a few hours later the entire thing is gone! Today, I went out and pulled another huge basket of them.  More zucchini boats for dinner tonight.  There is zucchini bread in the oven -- one for eating now and an extra loaf to be frozen.  The house smells divinely of autumn spices. 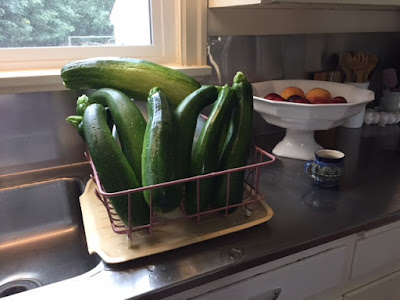 One other project is the onions.  I bought a bag of onion starts in the spring and since my garden had enough space I ended up planting all 100 tiny bulbs.  So 100 yellow onions grew to maturity and are now curing in the shop.  To make a curing "station", I grabbed my husband's sawhorses and put a panel of chicken wire over them.  Then I laid a ladder across.  The chicken wire helps hold the onions up so they can dry upside down.  My husband wasn't too happy about this use of his shop space and sawhorses, but it won't be for long.  After the onions are finished curing, which takes 7-10 days, I will have a go at trying to braid them.  Then the onions can be hung in the cellar -- I'm hoping they'll store well in there for at least a few months. 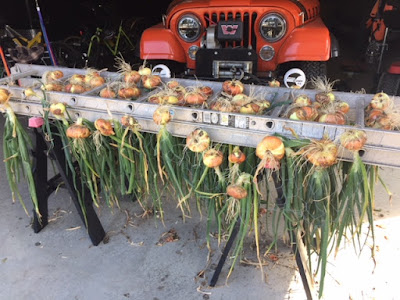 We were very interested the other day to meet our neighbor across the street - "Farmer Joe" -- who has a large garden, hives for honey, and raises his own beef. He posted a notice on the end of his driveway that he had produce and honey for sale, and many neighbors stopped over to buy some, including us.  The honey is absolutely wonderful.  He will also be selling meat soon, and we're thinking of getting a chest freezer so we can stock up on local meat as well.