July 04, 2018
We started off the day picking pie cherries from one of our trees and baking a pie.  These were the first pie cherries I'd ever had.  I was dismayed at first when I tasted a cherry fresh from the tree -- they are indeed horribly sour and not palatable as fresh fruit.  Pie cherries are very different from the sweet Rainier and Bing Cherries I've grown up eating fresh by the handful.  Today's pie was an experiment to see if it was worth the effort of picking more than a bowl full. 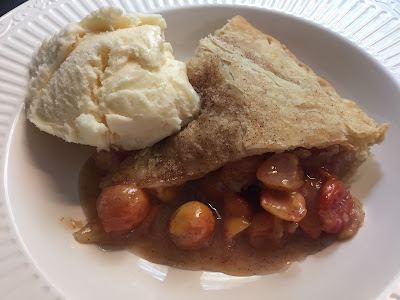 Well, I can tell you, sour cherry pie is delightful. The cherries are slightly tart but well balanced by the cinnamon and sugar in the filling. The sweet and tart taste reminds me a little bit of rhubarb pie. 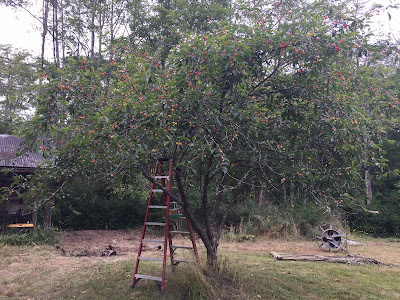 The small tree out by our old milking shed is just loaded with cherries, which made it easy to quickly gather more. 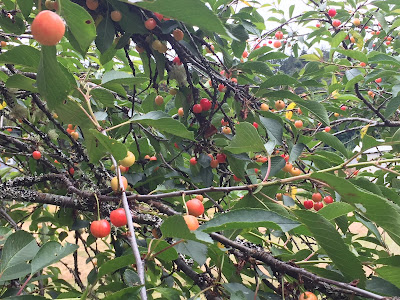 After picking two more big bowls of the cherries, I pitted them and stashed them away in the freezer for future pies. 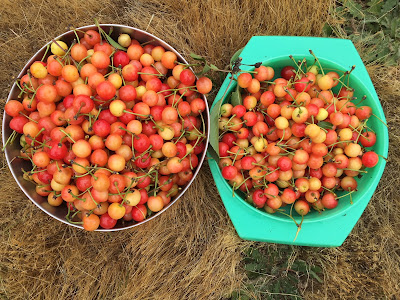 At noon, it was time to head over to the barn to help Reggie the Horse get ready for a community parade.  We babysat Reggie a couple weeks ago and became more familiar with the quirky miniature horse.  Reggie was the star of the parade, which started down at the end of our road and made its way to the clubhouse.  Along the way, he stopped in neighbors' yards to say hello. My daughter had fun helping groom and dress him, guide him along the route with his owner, and then clean him up afterward. 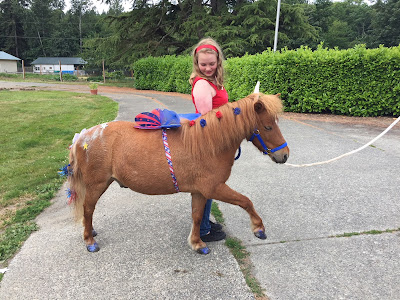 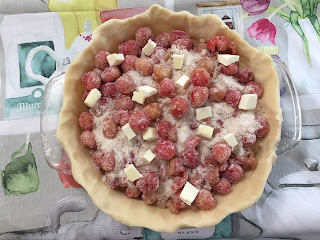 Heat oven to 425 degrees F. In a medium bowl, whisk together flour and salt.  Cut in shortening well, until uniformly combined.  Add water and gather dough together quickly without handling it too much.  Separate into two balls and pat each one smooth.  Roll out the first ball of dough on a floured surface and then line the pie plate with it.

In a large bowl, whisk together the sugar, flour and cinnamon.  Add the cherries and mix together until evenly combined.  Pour the filling into the pie plate, and then dot the top with small pieces of the butter.  Roll out the top crust, carefully place onto the pie, and seal and crimp the edges. Cut several slits in the top of the pie.  Sprinkle with a mix of cinnamon and sugar, if desired.  Cover edge with foil to prevent excessive browning.  Bake for 35 minutes, and then remove foil.  Bake up to 10 minutes longer, checking on the pie periodically to make sure it doesn't over-brown. 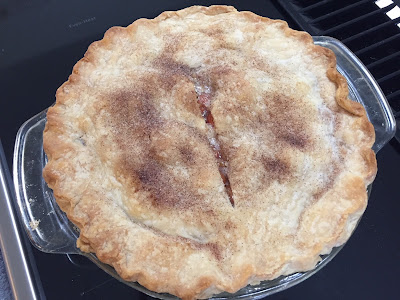