January 02, 2018
On New Year's Eve, I found myself behaving like a little girl as I eagerly attacked the hidey-hole door (otherwise known as Coraline's Portal) with a drill and crowbar, anxious to see what was inside.  My mind raced with possibilities.  The tiny door at the back of a closet had hinges and there were wear marks where someone repeatedly opened it. Never had a door seemed so filled with possibilities for something of value to be waiting behind it, especially since it had been screwed shut and floor trim covered the lower edge, making it difficult to open.

So there I was on my hands and knees at the far end of the closet, putting the proper drill bit into my husband's drill, getting ready to unscrew the door.  I realized as I was working on it that the floor trim actually wasn't placed over the top of the door, but rather that the settling of the house had caused the wooden door to slip slightly under the trim.  That made it seem even better, as likely this door had not been opened in decades.

With the screw now removed, I commenced to pry the door open with a crowbar.  Gently, and as patiently as I could given the circumstances (I didn't want to damage the floor trim), I managed to wedge the door over the top of the trim, and then gripped the side of it and pulled.  It opened. 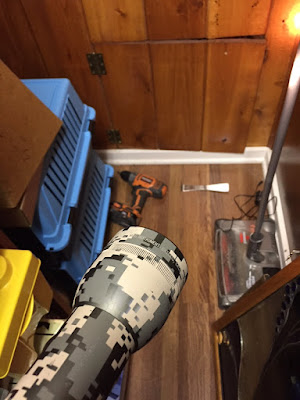 I grabbed the flashlight.  Switching it on, I peered inside, past cobwebs, deep into the darkness. 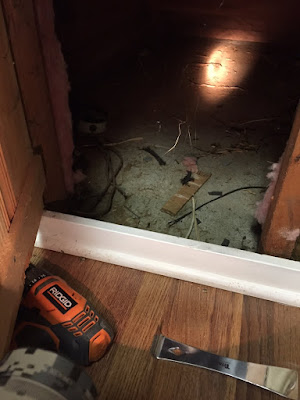 There was nothing.  Just a large, empty, and rather perfect space where something fantastic might have once been. Noooo! I was soooo utterly disappointed.  There are no words to describe how crestfallen I was in that moment.

The feeling reminded me of the day my daughter, when she was about 3 years old, begged me to buy her a set of Dinosaur Magic Grow Capsules.  She saw the package several times in the grocery store and kept asking for them. I finally relented during one of our weekly trips and bought them for her.  Her excitement to take a bath when we got home was humorous, as she normally came up with numerous complaints and dodged bath time for as long as possible.  No, not this time, she got right in and with a devilish laugh she tore open the package and tossed the little capsules in the water.  "Wait, wait!" she yelled at me, her eyes wild with anticipation. "Watch them grow!"  It was a rude awakening for her, as I think the little sponges only grew to about an inch in length.

So, the mystery shrouding Caroline's Portal has dissipated.

We spent the afternoon of December 31 making our very first Time Capsule, as promised, for placing inside the vacant hidey-hole.  Some day in the future, new owners of the house may eagerly look inside there and discover it. 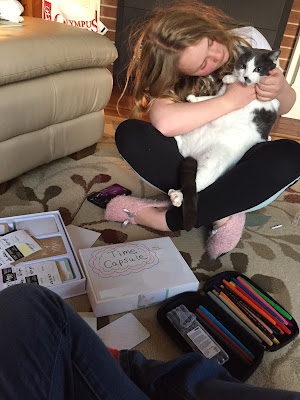