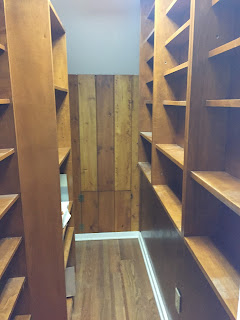 There is a little door deep inside a hall closet of the old house we just bought. The door has hinges. It has been nailed shut and floor trim put in front of it. Opening it will require tools and effort.

While I want to rush in and open that portal... er, rather, I mean door, another part of me wants to savor the moment and speculate as to what could be inside. The house was built during World War II. It's been home to several families since then. How long has this hidey-hole been harboring its secrets? And what could possibly be inside?

I've been showing the snapshot I took of it to family and friends during the past few weeks as we waited to close on the house. Soon, the house will be ours and we'll be able to unpack our tools and crawl inside the closet and look inside that little door.

For now, I continue to wonder, and my imagination has run wild with the help of everyone who has offered their ideas, some practical-minded and others quite imaginative:


What ideas do you have?

We plan to open the door on New Year's Eve 2017. Yes, I know, that's a long time to wait and wonder, but it's been hidden this way for perhaps 73 years, and a few months more to consider the possibilities and prepare seems worthwhile. After opening it, the secret contents will be revealed. What if it is just pipes? Or nothing at all?  Maybe it's an empty crawl space? I would be so disappointed. To make it worth the speculation and just in case nothing is there,  we decided that after opening and inspecting it, we would put our own time capsule inside and nail the door shut again. That way regardless of what is inside, it will be our own special moment and the house will then have something intriguing to offer to its next family many, many years from now. We're also taking suggestions for what to put in the time capsule. Please suggest your ideas!