More Vintage Vases and Other Treasures in the Cellar

November 08, 2017
After cleaning up the first five mid century vases I found in the cellar on the old metal bookshelf, I decided to go down and look around a bit more. It's kinda spooky down there with all the dust and cobwebs, but after poking around a bit, I did discover a few more treasures.  Three more mid century items are now added to this new photo. 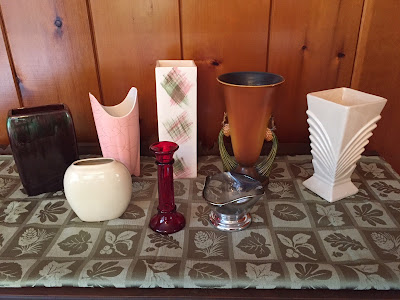 So, after looking at the bottoms for markings and doing a bit of research, here is what we have.  In the back row, left to right:


In the front row, left to right:
One other "treasure" I found on my second trip digging around in the cellar was a vintage pink dish drying rack.  It was under a bunch of boxes that the former owners had left, that are too yucky right now for me to want to deal with.  I spotted the pink wires and knew it was worth digging through junk to retrieve.  Since we tore out the dishwasher after buying the house (the dishwasher had a good four inches of water in the bottom that was growing mold), I've needed one of these for dish washing. I've been using towels to set the dishes on, which results in sopping wet towels on the counter whenever I'm doing the dishes.  Love, love, love the pink color, and the fact that it was a found item! 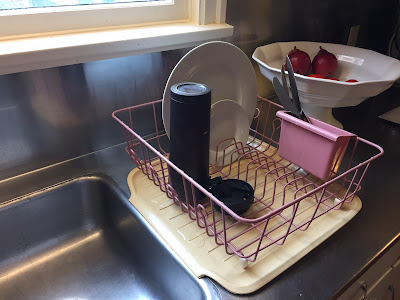 No idea yet what I'm going to do with the vases - keep or sell? We'll see.