Found in the Cellar: Mid-Century Modern Planters and Vases!

November 08, 2017
We've been planning to move a couple of metal shelving racks (the sturdy kind that Costco carries) from the cellar over into the laundry room.  This morning I went down into the cellar and thought I'd see if I could move them on my own. They were too heavy, but in the process of puttering around in the cellar, I noticed that there are several nice-sized pieces of plywood that would be great for helping to weatherize my chicken coop. So I moved a piece away from where it rested -- it was leaning against a 1950's style metal bookshelf -- and out of the corner of my eye I noticed something red on the bottom shelf.  I was a bit startled at first because it looked like a red glass bong.  I squatted down, brushed the cobwebs out of the way, and saw that there were several other objects on the shelf next to it.  Looks like I found some mid-century modern planters and vases! 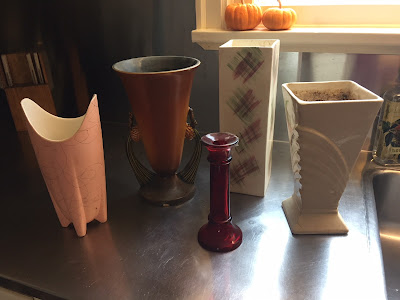 Of course I grabbed them all and rushed up to the kitchen so I could get a closer look.  Thus this picture.  Doesn't the red thing look like the base for a bong?  I'm not sure what it is, other than just a vase.  It doesn't seem old, and it doesn't have any openings other than at the top.

I really like the pink one, the brownish one with the pinecones on the handles, and the white one on the far right.  The white one still has dirt in it.

I was kind of excited and thought I'd share my find with you all.

Well, they are all still sitting down there on my kitchen counter, so I'm going to go clean them up now.  If they come out nice-looking, I'll add a few more close-ups. Yay! 😊