The first big snowstorm to hit our area arrived overnight. When we moved here five years ago, everyone we talked with in town said it never snows here. They said we're too coastal for snow. Well, Mother Nature decided to prove them wrong, giving us an astounding 6-18 inches of snow each and every year since then. Today, the snow has accumulated to 8 inches. The sky still looks dark, leading us to think we may see more. Then, the temperatures will dip into the teens over the next couple of days, something we haven't had here before. 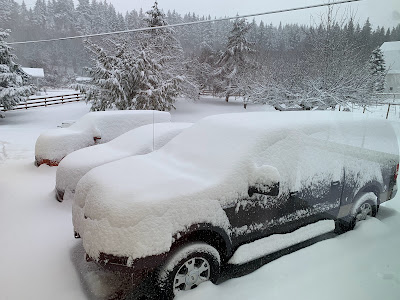 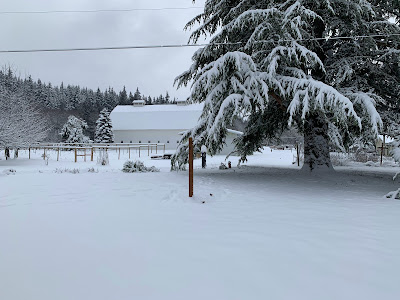 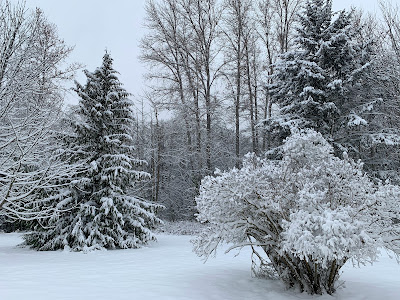 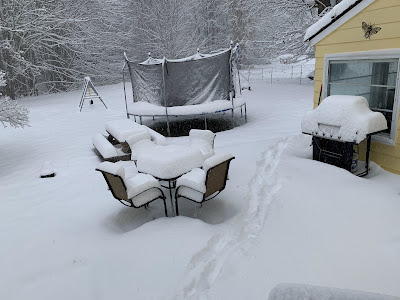 There are a few measures we take when it snows or when the temperatures dip below freezing after learning some lessons the hard way. For example, we leave the water dripping in the downstairs sinks at night to avoid frozen pipes. Everything's also insulated way more than in the past; leaving a slow trickle of water dripping is just added protection. We also put a bucket over the water shut-off valve in the yard, so we can find it later on if necessary. And we cleared the snow off the hoods of the cars and turned them on, letting the engines run for 15 minutes. If snow is left on the hoods, it can lead to wiring issues that are impossible to troubleshoot and fix. It only takes a few minutes to clear off the hoods of the cars with a soft bristle broom and turn them on. Running the engines helps dry things out. 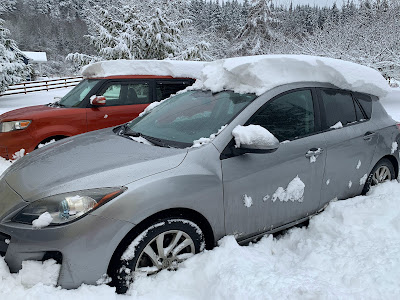 The chickens and ducks don't venture out too far from their coops. I scattered some straw on the ground around their water containers, so they don't have to go into the snow if they don't want to. 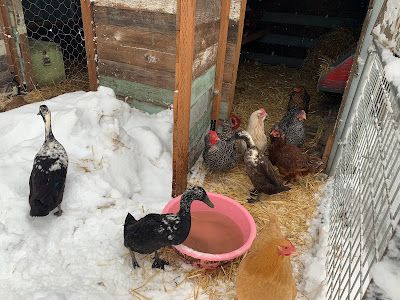 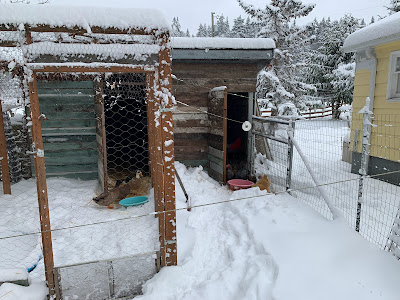 We still have bees in two of our hives, although there are a lot of bees dying off every day. It worries me that we may see dead-outs due to too much attrition, with not enough bees alive in the hive to generate the amount of warmth required to stay alive. We've given them the best chance we can, though, with extra insulation and plenty of sugar in their hives. Additionally, one hive has a moisture-absorbing board inside the top box, and the other has a quilt box with pine bedding for its top box, so in both cases, they should not have too much moisture that can drip onto them. The hives are also tilted forward so that any water at the top will run forward before dripping down. Since this is our first year overwintering bees, we're new to the experience and unsure of what to expect. I heard from another beekeeper in our area that they lost 5 of their 7 hives already, so I know the odds are against our bees making it until spring. Bees just don't generally survive well in our area, even for experienced beekeepers. I've thought about putting a heating pad in one of the hives, but am reluctant to do so since too much heat may cause them to think they can go outside. They need to basically "shut down" and stay in, and the cold is what prompts them to do this.
Not much else is going on. We've been getting over a bad flu bug that lasted a week and a half, so we haven't been out and about to see anyone since our daughter's theater performances just prior to then.
Keep warm and stay safe, everyone!