We made apple scrap pepper jelly the other day. I was going to post a recipe here, but this was one of those science experiments where I kept adjusting it as it cooked. Have you ever made jelly that way? I wasn't sure it would turn out, but amazingly, it came out perfectly. Just the right thickness, sweetness, and heat. Sadly, I have no idea as to the exact ratios of ingredients used, so I'll probably never replicate it again.

We used the apples we harvested from our winter apple tree, along with serrano and Asian five-spice hot peppers we grew in the garden. The "apple scrap" part of this jelly is made by boiling the apple peels and cores for a few hours until you have apple juice. This is then the juice that is used in the jelly recipe. Except, I didn't realize how important the cores are for adding pectin to the recipe, and I gave the cores and yucky bits of apple to the deer. So, I only had apple peels. This meant I needed to use pectin in the recipe. 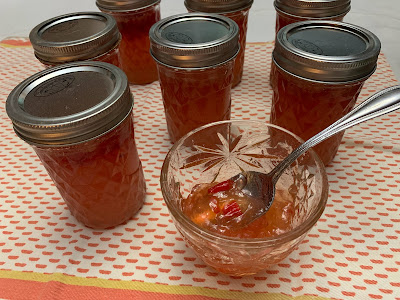 I sort of followed the tart apple jelly recipe on the Pomona's pectin package, except I reduced the amount of pectin slightly and added more sugar. I also replaced a tablespoon of lemon juice with apple cider vinegar. Otherwise, the jelly involved tasting and adjusting the sugar until it was sweet enough to balance the heat of the peppers.