Nine months ago, we offered to become foster parents for the Olympic Peninsula Humane Society. There weren't any foster opportunities then, but we stayed on their list in case they needed help. Then, in mid-July, we got the call. They had a momma cat and three kittens for us to foster. The momma was found in a barn when she was pregnant, and now that she had given birth, the kitties needed a foster family to take care of them. They would be with us for 8-10 weeks, and then the Humane Society takes it from there. It has been a great experience, of course, except I forgot how crazy kittens get when they are big enough to crawl out of their pen. They were only in their pen for about two weeks. Since then, it's been total wild chaos in The Corral, which is the room of the house that they are in.

Luckily we have a big enough house that it's not too overwhelming. The kittens love to race like bandits around the room, climbing up the furniture, clawing, and chewing on everything. As soon as those kittens became mobile, we moved all the nicer furniture out of there. The stuff that's left is older and kind of rough looking anyway.

Momma Cat already had a name, Amelia, but we have only ever called her Momma Cat. So, she thinks that's her name now. Elizabeth had the honor of naming the kittens. Let me introduce you to the little buggers: 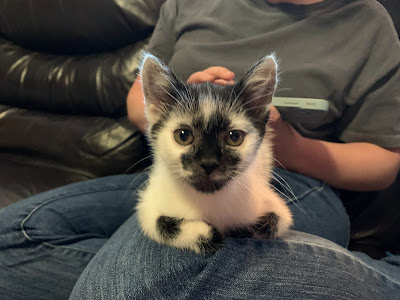 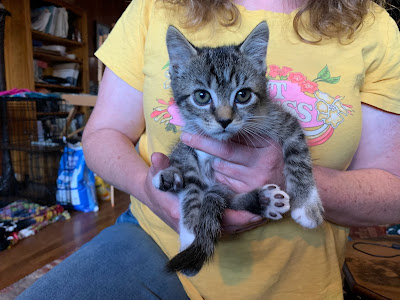 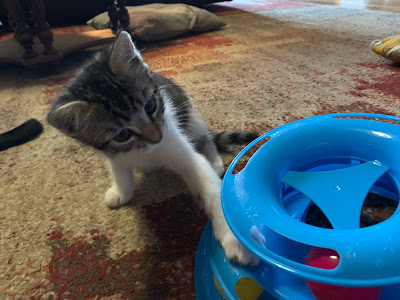 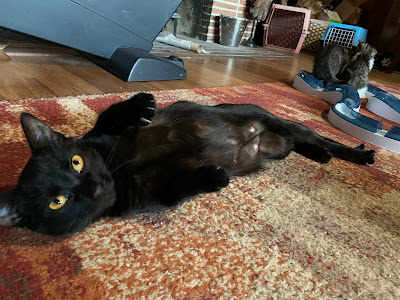 We've been busy with a few home improvement projects as well. Paul built two new doors for the chicken coop and put siding on the front. I'm so pleased that he repurposed some old wood from our property since wood is so expensive to buy. He used cedar 2x6s from an old fence that he tore down. We think the boards are 50 to 70 years old, but they are in good shape still. Once he's finished getting everything into place, we'll pressure wash, sand, and paint the entire coop yellow to match the house.

Paul has also been working on the back patio. It had been painted red some 80 years ago, and most of the red paint has since chipped off. So, Paul pressure washed, etched, and painted it with a special gray paint that contains sand, hopefully making the patio less slippery. 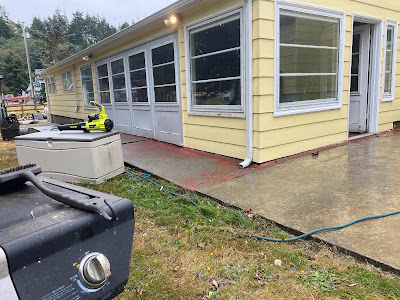 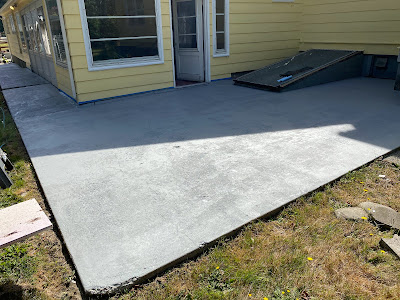 Earlier in the summer, Paul built a fence around our blueberry pasture. It looks so much better, and it's nice being able to keep the deer out of that area. We removed the netting that was on the berries. The netting had been up for a few years and weighed down the plants. 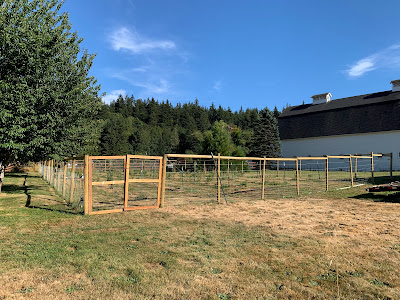 During a honeybee hive inspection yesterday, Paul and I pulled out one frame that was half-filled with honey and extracted it. We have our first jars of honey! 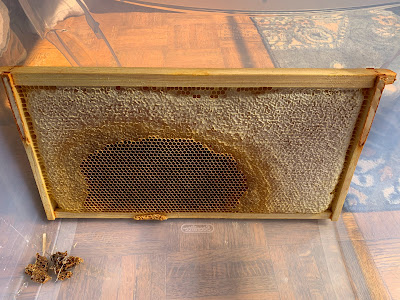 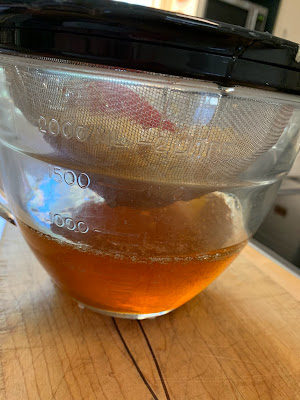 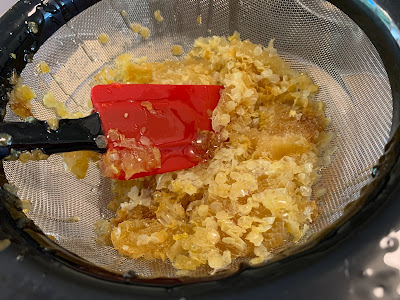 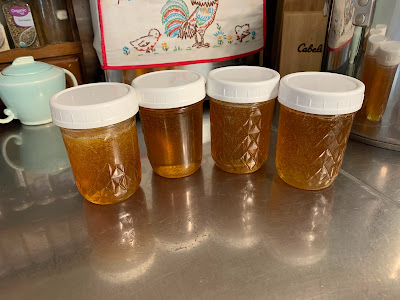 After extracting the honey, I put the frame out in the yard so the bees could clean it up. It was soon covered with honeybees. 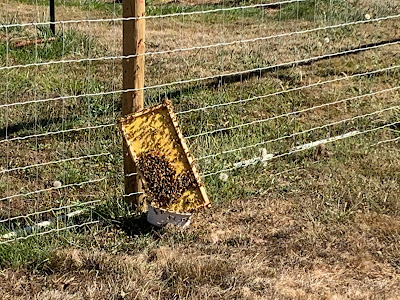 Elizabeth and I went to Seattle a few weeks ago to attend Comicon. We were excited to see Con O'Neill (The Batman, Our Flag Means Death). She got his autograph and had her photo taken with him. We also attended a panel discussion that he was in, and she was able to ask him a question during the Q&A. We also went to the Medieval Festival with friends. She and her friend learned how to swordfight the way actors do in movies. 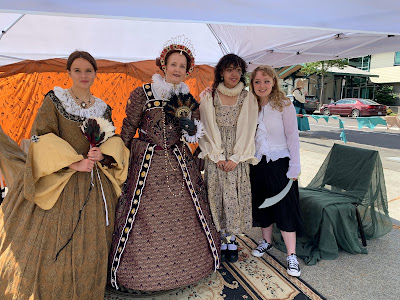 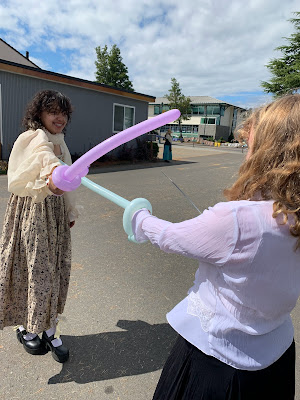 Recently, we were treated to a 3-day visit with friends Steve and Aniera, and during the visit, the men and girls all went crabbing off the pier. They brought home a bucket full of crabs! We live-backed the crabs on the front steps (which means we basically smashed the backs off the live crab right there on the corner of our brick front steps!). I had learned how to live back from a YouTube video and had gotten reasonably competent at it from a previous time crabbing, so I showed Steve the technique. He then live-backed most of them. You just grab a crab from behind (so its pinchers can't get you) and point its eyes toward the spot where you intend to smash it. Then, with considerable force, BAM! The top of the crab pops off if you hit it hard and fast enough; otherwise, you'll end up cracking it and pissing it off big time, so you have to smash it again. After the back has popped off, you swiftly break the crab in half and shuck out the guts with a quick downward shake. If you do it right, the crab is dead and cleaned in seconds. We had a feast the next night with crab dipped in butter, hamburgers, corn on the cob, and oysters that the men put on the grill to open the shells. Dinner was enjoyed at the picnic table in our backyard. 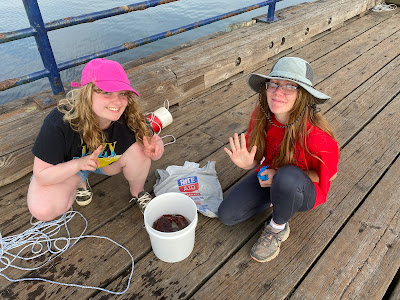 After two years without a big family get-together, my family had a reunion in Mount Vernon, Oregon (in central Oregon near John Day). Elizabeth and I went while Paul stayed home to care for the animals. That weekend, a heat wave extended from all along I-5 in Seattle/Tacoma down through Portland and out to central Oregon, where we were headed. We were glad to see the family, although it was 110 degrees and everyone attending was so overheated that no one remembered to take pictures. Everyone just wilted there inside my aunt's house. I only have photos from the drive, as we stopped a few times along the way. 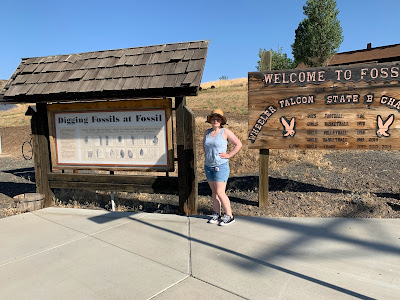 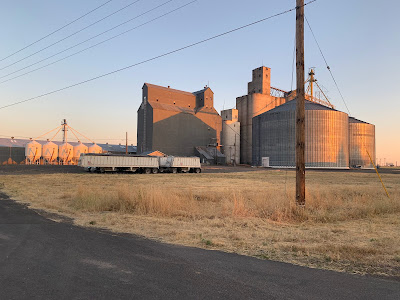 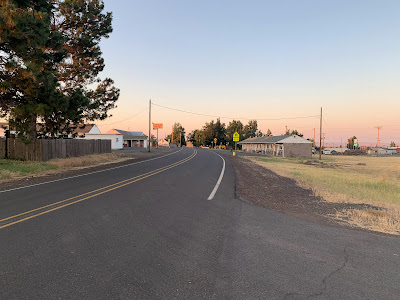 On the way to the reunion, Elizabeth and I stayed overnight in Condon, Oregon, which is shown in the two photos above. It's a lovely small town with a great motel. There isn't much out that way...mostly just lots of wheat and hay fields. 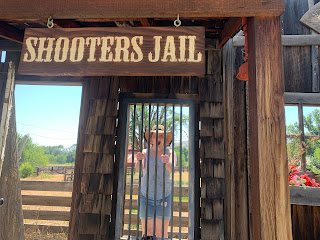 We enjoyed the drive back home as we brought my dad with us. We took him all the way to his house out near the coast.
In mid-August, a get-together was held for my father-in-law's birthday. We gathered at his house for a barbecue on his back deck. It was a lovely visit, and we enjoyed seeing everyone and meeting some of Terry's family, who we had heard so much about.

Our summer garden has been doing okay this year. Not as great as in prior years, but we've had a few good-sized harvests. Unfortunately, the borage took over much of the garden and crowded out the corn and green beans. 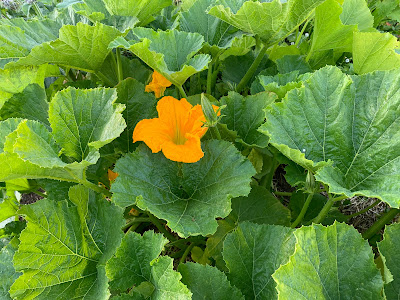 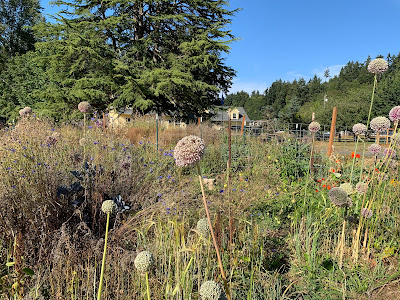 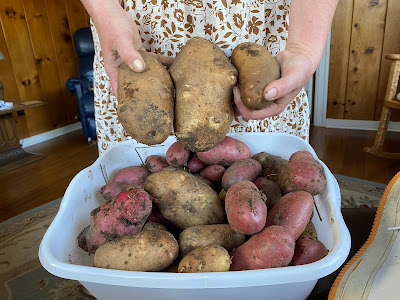 Since our green bean harvest was so pitiful, we bought a 30-pound box from Sunny Farms. I didn't realize how much canning a 30-pound box involved. It was a lot of beans, let me tell you. I almost regretted asking for the beans when the produce manager put the giant box into my cart. But, it seemed rude to send it back, especially since he had to weigh and price it. So, I took it home and set to work preserving every last bean. I pressure-canned beans, water bath canned dilly beans, and blanched and froze a bunch as well. We will be well-stocked with beans for the next year. 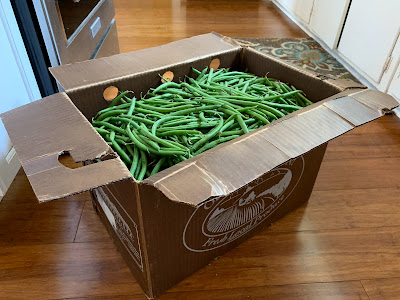 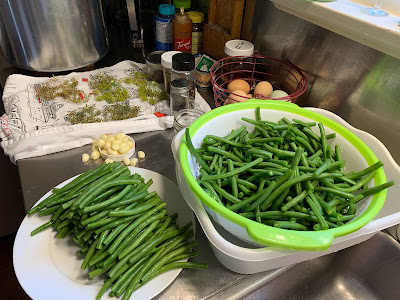 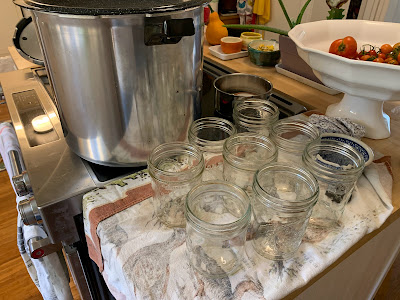 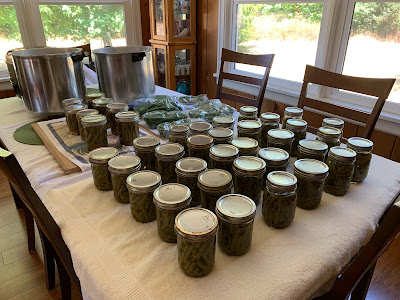 Last Wednesday, we made it into town for the last free summer concert. It was a warm and breezy evening, and people were having a great time out there with a live band, beach balls bouncing around over the top of the crowd, people dancing on one side, and a bubble machine spouting bubbles out everywhere. 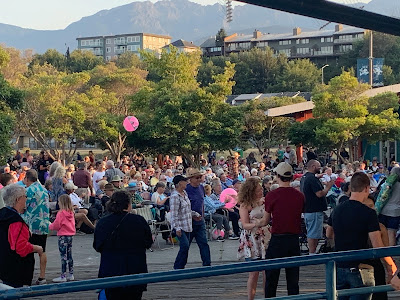 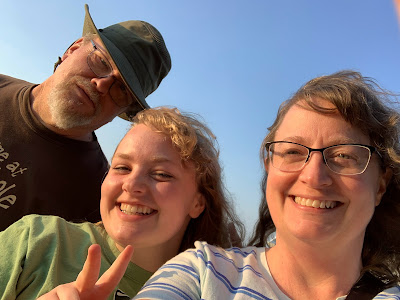