Imagine having homemade sour cherry crumble, four pie tins full, ready, and waiting in your freezer. All you have to do is take one out, let it thaw, and then bake it on a cookie sheet.

I'm still working on using up the fruit that I froze last summer, including tart cherries. So, I decided to make a few pie tins full of sour cherry pie filling and then add a crumble topping made with oatmeal, brown sugar, cinnamon, butter, and walnuts. In all, the batch I made filled four 8-inch tinfoil pie plates. Then, each of these fits inside a gallon ziplock bag. I used a straw to remove the air from each bag. They're ready to go into the freezer. 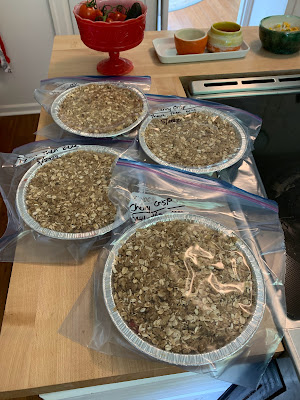 With any kind of frozen dessert that has a crumble topping, I think I'll thaw it in the fridge first. That way, the topping won't get too brown during baking. Alternatively, I think you could bake it at a low temperature (like 325 degrees F) for a half-hour and then increase the heat at the end if needed. If the top starts to get browned, you can also lay a piece of foil over it.

We often make up a bunch of apple pies in the fall using these tinfoil pans and then freeze them for enjoying during the holidays. It's nice having a homemade treat in the freezer that can be pulled out when you have company or just when you have a hankering for something sweet.

Once these are frozen solid, you can stack them, so they take up less space in the freezer. 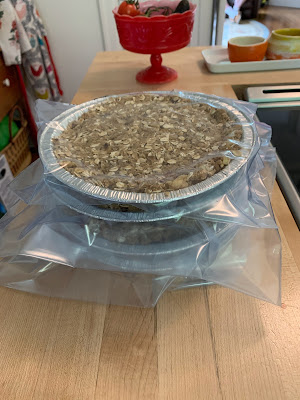 It's also a good idea to double-bag frozen things like this. You can either wrap each pie in saran wrap first before putting it into a ziplock bag, or you can put these just as they are inside a big plastic grocery bag (which is what I plan to do). That way, they don't get freezer burn. We've found that they stay fresh for at least 3 months in the freezer.

Here is the recipe I used for the cherry pie filling. I didn't use a recipe for the crumble topping, but here's the method you can use if you want to give it a try:

Toss in as much oatmeal into a medium-sized bowl as you'd like. Add a small handful of flour. Dump in some brown sugar (use more if you like it sweet, less if you don't). Add any kind of nuts if you're not allergic (walnuts or pecans are sure good). Sprinkle with cinnamon. Stir it around, and then add some butter. Don't be shy with the butter. Use your hands to mix it really well. It should look like crumble and taste like homemade goodness.

If you're a health nut, you can add a little bit of the following (not more than a tablespoon of each, or else it will overwhelm the flavor): wheat germ, flaxseed meal, or almond meal. Instead of white flour, you could use any other flour you have on hand.

You're not supposed to eat raw flour (can you believe that? seems odd, but look at the bag, it says so).  But, I always do so that I can taste to see if the ingredients are adjusted correctly.