What to Do About Sick Hens

This week, we've been dealing with two sick and dying hens on our farm. Yesterday morning when I went to let the chickens and ducks out of their pen, there was Beaker, out cold, laying on the floor of the coop. Poor girl. It looked like she took a sudden nose-dive off the roost during the night.  I used a snow shovel to scoop her up and we actually buried her in a molehill in the pasture.  A mole had tilled the soil super fine, making it easy to dig a deep grave.   What a morbid scene it was carrying Beaker's lifeless corpse across the field using the snow shovel.  Her feet were sticking straight up.  R.I.P. Beaker. 😭

We have no idea what caused Beaker to pass away so suddenly.  The prior day, she was out foraging with the other hens and seemed just fine.  She was 2 years old, which isn't very old for a chicken. We hatched her from an egg here on the farm, and her father was Captain Rooster. We're not positive about who her mother is. Perhaps Beaker had a heart attack during the night.  Sudden Death Syndrome in chickens is common and usually, you have no idea what caused it.  I called my sister, who is way more experienced with raising chickens than we are, and she confirmed that it's true, chickens just suddenly pass away.

Additionally, one of our other hens has been sick for a few days.  Her name is Big Bird and she's a Gold Sex Link.  After researching her breed, we learned that Gold Sex Link chickens only live about 4 years, and she is just over 4 years old.  Likely it's just old age.  This is the age at which Henrietta also died, and she was also a Gold Sex Link.  Beware of the breed, as they don't live long! 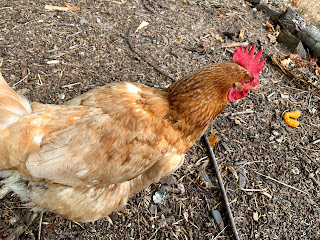 One of the questions we've been wondering about is whether it's better to bring sick chickens indoors, so they're warm and separated from the rest of the flock, or leave them outside with their flock friends?  I struggle to decide this each time.

In the case of Henrietta, I brought her inside. She got worse and then died. Same with Freckles, who passed away about 4 years ago. Both hens were in crates in our living room where we could fuss over them.

However, look at Miss Prissy Fuzzy Bottom.  I got frustrated trying to figure out what would cure her sickness, and I ended up putting her back outside with the rest of the flock.  She recovered.  Also, Little White Bird was sick once, and I left her with the other hens.  She snuggled in a nest with another hen and got better.  Cress had the same experience; being left out with the rest of the flock seemed to boost her spirits and soon she was better. It could be these examples are coincidences and the hens would have lived anyway.

We decided to leave Big Bird outside. Since the boy ducks are rambunctious, we have them separated in another section of the coop, so they don't bother her.  Big Bird was really sick and I thought for sure she'd pass away last night, but then this morning she came out of the nest and walked around.  She still looks like she's at death's door, but seeing her friends around her is a powerful medicine that is keeping her going right now. She's drawn to where they are eating and pecking at the ground. Chickens experience fierce competition that must be hard for them to resist. She ate a few bites of yogurt this morning, and there are probiotics and medicine in their water.   The sun is out today.  I don't have much hope for her, but maybe being around her hen friends will ease the transition. I'm just glad this chicken sadness didn't happen while we were out of town. It's definitely something that the chicken owners should deal with!