Honeycomb in the Wrong Place!

In both our hives, the bees were building up long columns of comb that they had attached to the lid. Today when I went to feed them, I almost couldn't get the top open! Oh no! It meant I had to scrape off those columns of honeycomb. If you leave a gap, bees will fill it. And apparently, I left too much of a gap. So after removing the honeycomb, I removed the empty queen cages and squeezed another frame into each hive.

Hopefully, I didn't kill the queens in either hive when I did all this. The hive will collapse if you kill the queen, and you lose everything. No pressure, right?

I brought in the removed honeycomb, and sure enough, they were filled with honey. So we stood there with chunks of honeycomb licking off the sweet honey.  It tastes just like honey from the store except a little lighter and sweeter. Every season with the different flowers in bloom, the taste of the honey should change some.

Here is the extra honeycomb that I'm saving to enjoy later: 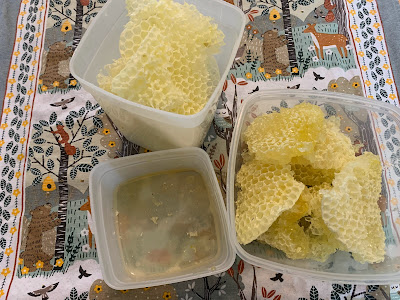 They call this extra comb that's in the wrong place "burr comb."

The beeswax can be used for making things like candles, lip balm, and lotion bars.

The bees look good, very active, and busy. Although, right now, they are super pissed off at me and recovering from their ordeal. Tomorrow we will do a preventative treatment for varroa mites using oxalic acid, a naturally occurring substance found in many plants, including rhubarb leaves. It's one of the most effective treatments to help keep the hive healthy.