Homemade cloth napkins are easy to make; in fact, sewing cloth napkins are the easiest sewing projects I've ever attempted. For me, sewing is really, really hard. I'm terrible at it.  If the project is at all complicated, I usually make a mess of it, get frustrated, and finally hide my failed attempt somewhere.  Usually tears are involved. And humiliation.  One time, I tried to make a sock monkey, and his legs came out different lengths, and then when I tried to stuff him with fluff, his side seams busted out.  I was distraught and felt like I'd failed as a mother.  The forlorn-looking monkey was placed in a box and hidden in the back of my closet for years, until I came across him again and put him in the trash.  The sad monkey’s face still haunts me, as it felt like that monkey knew. It was one of my greatest sewing failures.

But then there are cloth napkins, which console me with their simplicity.  What a useful item to have around, too - these napkins go into lunch bags and are used at the dinner table. They also go inside the bread basket; one napkin on the bottom and another on top of the bread to keep it warm.  Pancakes for breakfast? Put a cloth napkin over the plate of pancakes and they'll keep warm as you're making them and once they're on the table, the napkin will keep them warm all through breakfast.  I find these little squares of fabric not only incredibly useful, but also comforting.  The fabric colors and patterns are cheerful and fun, and the material is soft.  I've even used them as a hankie, carried in my purse in case I need it. 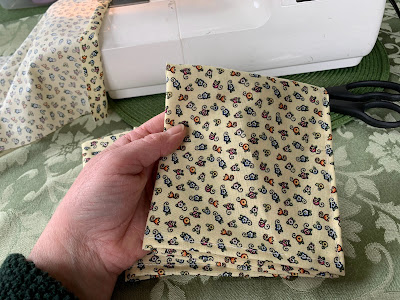 You can make cloth napkins from any type of fabric, but the easiest to sew with are light-weight cotton fabrics like calico cotton or quilting cotton. These are the fabrics that you'll find in the front of the fabric store, where each season's newest prints are on display.  But I've made cloth napkins using clothing and even bedsheets that were destined for the Goodwill pile; these clothing and sheets were spared because I liked the print enough that I wanted to repurpose it.

The size of the napkins can be adjusted, too, based on how much fabric you have.  At first, I started out making all our cloth napkins 18" or 20" square, but there are times when I don't have enough fabric to make the napkins that large, or I want to get more napkins out of the piece of fabric and so I'll adjust the size.  They don't have to be perfectly square, either.  I've made them an inch or two wider than tall just so that I can use up the entire piece of fabric. 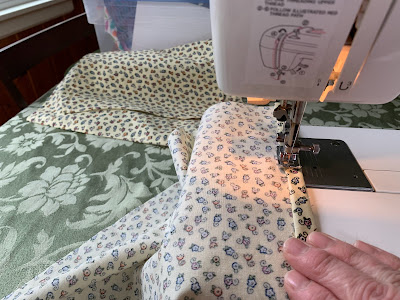 To sew cloth napkins, you just fold the edge over twice and then sew along the edge.  Of course, you can iron the folded edge down to make it easier, but I'm lazy, and so I sew without ironing.  It means starting and stopping a lot to keep folding the fabric over more as I go, but that's okay.  I don't take the fabric out of the machine at the corners, either...about two inches before reaching the corner, I begin folding the fabric over along the next edge, and then I sew up to the corner; then while keeping my needle buried in the fabric, I lift the foot lever so I can turn the fabric, lower the lever to put the foot back down, and then keep on sewing.  From start to finish, I sew all the way around without having to cut the thread or reinsert the needle. 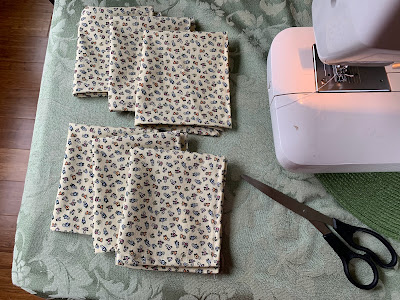 The best part about sewing cloth napkins is that the project is finished and you have something useful to show for it within an hour.  However, usually I divide the project up among several sewing days.  One day, I cut all the fabric that I'm going to use for napkins.  Then I put the cut pieces in a pile and save them for another day, when I'll sit down and sew.  I only sew a few napkins at a time.  Just enough to have something to show for it.  Then into the laundry room the newly made napkins go to be washed, and soon enough, they're in the stack of napkins on our kitchen counter.

We have this gnome on the kitchen counter that protects the napkins.  He holds them up so the pile doesn't topple over.  We go through the cloth napkins so quickly, and they'll linger in the wash a while, so I decided to make more today.  When everything is washed, the napkin pile reaches the top of the gnome's hat.  We go through about 10 cloth napkins a day, all of which go into the laundry.  They get sorted into the regular loads to be washed with everything else, based on color.  If ever the pile is gone (because they're all in the laundry), my family literally doesn't know what to do.  No napkin? Where are the napkins?  We all stumble around feeling lost.  Even if we don't use the napkin, it's always there, this colorful scrap of fabric that we enjoy having next to our plate. 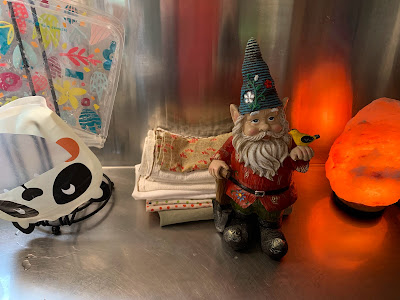 Cloth napkins are a great way to help reduce waste.  One other way I should mention, since you are seeing it in the photo above, is to replace disposable ziplock bags with reusable ones.  Next to the gnome, we have a drying rack for our reusable ziplock bags (the drying rack is an old paper towel holder).  Thanks to the reusable ziplock bags, I haven't bought sandwich bags or gallon ziplock bags in 6 months.  We just keep using these instead.  They go into lunch bags and we also use them to store things in the fridge, like lunch meat, cheese, lettuce, and all those other things that would normally go into a disposable plastic bag.

Now, to be fully honest with you, I will admit we do have some paper towels in our house.  They are hidden in an inconvenient cupboard a ways away from the kitchen.  That way, the first thing everyone grabs is one of the cloth napkins.  The only uses we have now for the disposable paper towels is to dry meat or for putting under bacon (I just can't seem to do that to a cloth napkin). We go through about 2 rolls of paper towels a year. And we go through zero paper napkins, yay!

Have you replaced your paper napkins and ziplock bags with reusable ones?  It seems really hard at first to do this, but once you give it a try, it gets easier with time.  The biggest help for us in making the transition was to put these out on the counter where we see them, and to hide the disposable ones in a cupboard in another room.