The first green egg of the New Year was laid today by our rogue hen, Little White Bird.  She is an Ameraucana hen and the green eggs are also called Easter Eggs. 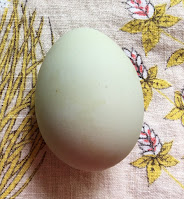 As you may recall from an earlier blog article, Little White Bird prefers to escape the chicken pen to lay her eggs.  She then finds somewhere secret and goes there every time that she lays eggs until her nest is full of her prized Easter Eggs. 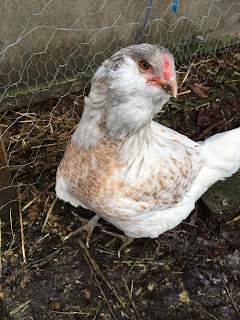 Today, I was mucking out the chicken coop when Little White Bird flew out of the pen and landed on the roof of the coop.  I didn't have my phone with me, unfortunately, or I would have taken a photo of her.  "What are you doing way up there, Little White Bird?" I called to her.  She seemed perplexed as she paced back and forth across the roof of the coop.  Then she flew back down into the pen.

Next, she managed to squeeze out at the gate where the fence wire had come loose.  I put her back inside the pen and fixed the fence.

Her antics clued me in that she wanted to lay an egg and was trying to find the perfect spot.  So I took a break from mucking out the coop and put fresh straw in all of the nests.  She immediately went to one of the nests and sat down.

I didn't think anything more about it until late in the day.  Cleaning the coop took about an hour and was pretty gross. We use the deep litter method when it's freezing cold outside, which helps keep the chickens and ducks warmer.  But, once the outside temperature goes above 40 degrees, the smell inside the coop becomes unbearable.  It's all that ammonia that's in their droppings.  This morning, when I opened the coop to let all the birds out, I stepped inside to gather eggs and nearly gagged from the horrific odor.  Thankfully, I had set aside a bale of straw and I had time today to get their coop cleaned and refreshed with new straw.  The hens were very happy.

We get a second use from the dirty straw by spreading it around outside the coop in the outdoor chicken pen, so that it covers up the mud that forms there in the rainy season.  The rain washes the top of the straw clean and keeps it from getting muddy near where the ducks have their pool and water bowls. We try to get as much use out of everything here on our farm.

After more outdoor chores, I figured that before it got dark outside I would gather the one or two eggs that we get each day in the winter.  There, snuggled deep inside one of the nests in the darkest corner of the coop, was a green egg, a gift from Little White Bird.  Now that she has successfully laid an egg in the coop, maybe she will continue to do so in  the future.