Snow and Ice on the Farm

Several more inches of snow fell since our first 11 inches the other day, covering up our vehicles again.  Wicked-looking icicles, some more than four feet long, formed all along our roofline.  With temperatures remaining in the 20s F for a week and more snow expected, we are stuck in this winter storm for a while. 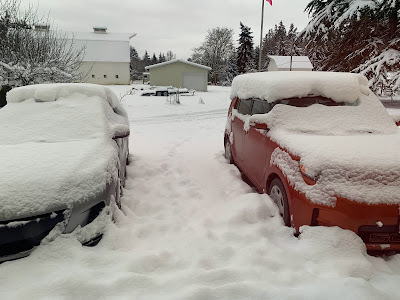 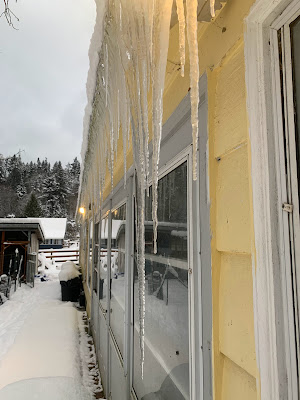 Yesterday, our weather station in front of the house recorded a low of 14 degrees F.  Our three biggest concerns during this winter storm are keeping our chickens and ducks warm enough, preventing our water pipes from freezing, and keeping the heat going in the house. 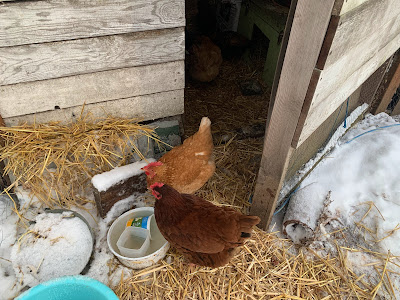 Ducks love water and their instinct is to submerge themselves in it.  But there are times when swimming in the water just isn't appropriate.  Here it is well below freezing, so cold that the ducks can't walk on the snow for very long. Their feet get so cold that they stop walking and sit down to try to warm their feet. They literally sit in the snow rather than walk on it! And yet, despite the snow and ice, Big Duck keeps getting into the water bowl.  Once in the bowl, he swims in circles.
Late yesterday afternoon, I saw Big Duck out there in the water bowl and was rather alarmed.  It's way too cold!  He shouldn't be doing that.  Also, as soon as I went out to intervene, I noticed that Big Duck's behavior was creating a secondary problem.  By getting in and out of the bowl multiple times, Big Duck caused the water to splash all over the ground, where it froze, built up into a giant ice path, and the ice path covered the doorway threshold.  Later that evening when I went to close the coop doors, the ice that had built up over the doorway threshold made it nearly impossible to close their door.  I had to chip away at it with a shovel for a good 20 minutes.  So, I had to do something to prevent that Dodo bird from getting inside the bowl.
On a farm, things are always changing and you have to learn to improvise.  This is one of those occasions.  To keep Big Duck (aka Dodo bird) out of the water bowls, I put a bunch of plastic containers in the two bowls along with a brick in the bigger bowl (since he was still getting into the bigger bowl even though it had the plastic containers in there).  He's one determined duck who loves to splash in the water!  Hopefully the ice situation around the bowl will not get as bad today.
To keep their water from freezing solid during the day, we have to go out there 3-4 times over the course of the day and pour more warm water in it.  It's not so bad having to do this - it gives us a chance to check on them, give them more food, and make sure all is well.  They eat more when it's this cold out - the food helps to fuel their bodies so they can stay warm.
An alternative to having to refill their water is to get a heated water container.  For us, since it really doesn't get this cold for more than a couple weeks a year, it seems like it's not worth the investment.  Also,  I would go outside to check on them throughout the day anyhow, since you never know what issue can crop up over the course of a day.
We also put a chicken heating pad out there.  The heating pad is made of hard plastic and is intended for use in chicken coops.  Any bird that is feeling cold can sit on it to warm up.  We've noticed that the birds are all moving around pretty well and that none seem to be suffering too much with the cold.  Even our hen who is molting is doing okay.  Here's the hard plastic heating pad we have (from Amazon), in case you are interested.
Another practice we follow during the winter is to use the deep litter method in the chicken coop.  With this method, you leave their droppings and the old straw/wood shavings on the ground to pile up, while adding more to cover up their messes.  You don't take any of it out.  As it builds up, it serves as a compost pile that gets warm.  It's amazing how warm chicken droppings in a compost pile can get.  With the doors closed, the coop is quite a bit warmer than the outside temperature.
As far as keeping us humans warm, we rely on wood and electric heat here.  Our pellet stove has chosen this winter storm to start to break down.  The combustion fan is making a loud rattling noise that has alerted us it's on its last legs.  We've ordered a new fan to replace it, and if in the meantime it goes caput, we do have a wood stove on the other side of the house that is helping to keep the house warm.  And we have space heaters.  The house is about 55-60 degrees during the winter storm, about as good as it gets when you live in a big old farmhouse like this.  We also have heated blankets to keep us warm at night.  It's amazing what a few extra layers of clothing and blankets can do to keep you warm, too.
The water pipes have held up so far, knock on wood.  With water dripping from 3 different sinks across the house, we've avoided catastrophe so far!  Hope you are all keeping warm and dry.  It's been crazy weather this year.  Apparently it never used to snow here - this told to us by neighbors who've lived here over 30 years - but since we arrived here four years ago, we've had snowmageddon once or twice a year!
Of course, there is one other challenge that everyone faces when it snows, and that is driving on the roads.  We're fortunate to have a truck that my husband drives when we have bad weather.  We also have learned the hard way that it's a good idea to start any other vehicles left outside, scrape off the piles of snow from them, and let them run for a bit, as last year one of our vehicles ended up with electrical issues caused by moisture from a foot of snow sitting on the hood too long. 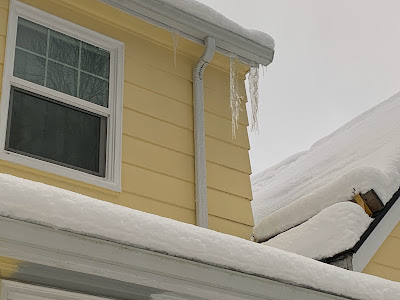 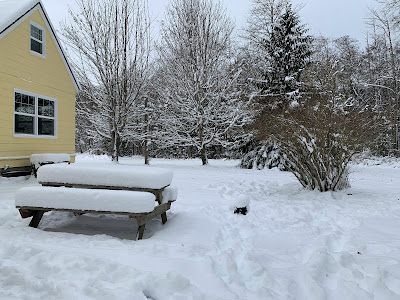