What if we could grow our own tomatoes and summer squash outdoors year round?  Most people use a greenhouse or grow indoors under lights, but we've found that there are tomato plants that will keep producing outdoors all the way into January, if planted in just the right spot.  Last year, we had Matt's Wild Cherry tomato growing in the corner of our south-facing brick flowerbed, right next to the front door.  The silly thing had gotten tall and gangly, and was reaching inside the door every time we opened it. I can't tell you how many times I had to tell it, "You stay outside," and tuck it's vines back out the door.  The poor thing got pinched a few times in the door in its eagerness to get inside our house. The amazing plant was producing new flowers and tomatoes, too, all the way into January, even after many days of hard frosts and snow.  Matt's Wild Cherry had appeared there as a donor plant after I'd put compost in the flower bed in the late summer.  Rather than tear it out, I let it grow, and was amazed at how long it survived.  I think it finally keeled over because it got repeatedly trampled by the dog, by the door, and by sweet old Barney, the barn cat, who liked to curl up underneath it and wait for us to come out for a visit.

That one tomato bush got me thinking about salvaging some of the summer this year, as well, by intentionally placing a few potted plants next to the same south-facing brick flowerbed.  It's November 10, and we've had multiple light frosts.  The potted plants I lined up along there are doing very well, as you can see below. 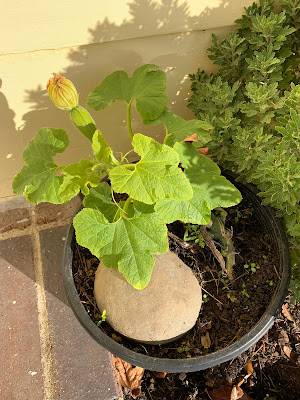 The lone zucchini plant has a big squash flower and zucchini fruit growing on it.  The rock that I put inside the pot is there to help soak up some of the day's warmth, as a way to help keep the plant warmer into the night.  This plant is sitting right where Matt's Wild Cherry was last year, right in the corner up closest to the house, out of the rain.  It hardly gets wet here, which means I can only give it as much water as it needs.  Summer squash doesn't like to stay too wet.  The leaves also won't get very wet here, either, helping to protect it from getting powdery mildew. 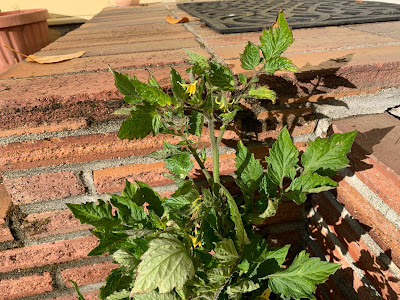 Tomato flowers continue to appear on this bush.  Further down on the bush, you can see some cherry tomatoes. 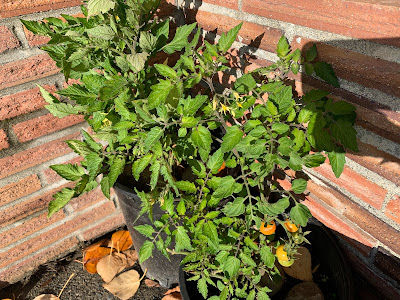 Cherry tomato varieties are probably a better choice for growing into the winter, since the fruit is less likely to get blight as compared to varieties that bear larger fruit. 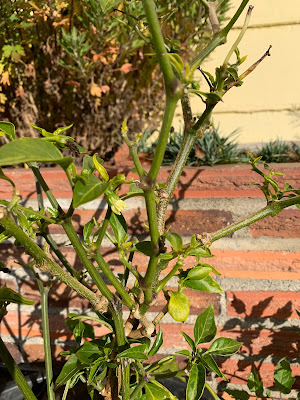 Above is a jalapeño pepper plant.  I dug this out of the garden 2 years ago, trimmed it down to only a couple branches, and overwintered it in our laundry room (which is right next to the garage and is a fairly cold room in the house).  Then, in February, I put it in our garden window and the plant grew enormous.  It didn't do so well in the garden, however - I think it flowered too early in the season and then it got shocked by the cold.  All the flowers died and fell off.  It had hardly any leaves on it when I dug it back out of the garden this fall.  But, here by the brick flowerbed, it is getting some great sun, and it likes the warmth of the bricks.  It's growing new leaves and today I discovered it has a flower on it. It also has one very small jalapeño pepper. 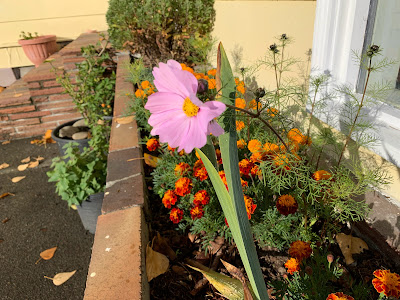 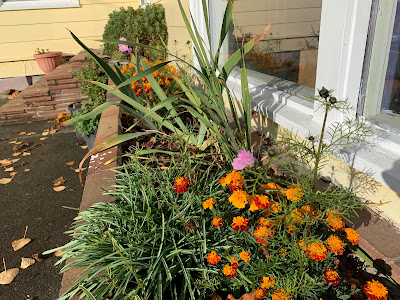 Everything happens in slower motion in the fall and winter garden.  The plants take longer to grow and their flowers are slower to open up.  But, given enough time and the warmth and protection of rocks and bricks to surround them, they do open up their pretty centers to the sun. 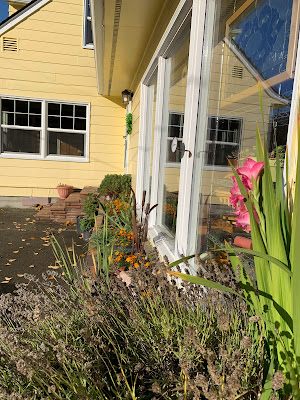 One other flower that is growing in the brick flowerbed is a gladiolus. The gladiolus has always been a symbol of summer to us, but yet here one is, blooming in late fall.  It began opening up a few weeks ago and now it's all the way opened. 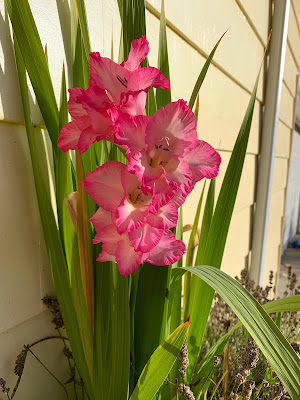 It's such a pretty summertime flower blooming here, just for us, in our brick flowerbed right next to the front door -- and in the middle of November! It seems remarkable.
The rain doesn't quite reach all of this flowerbed, which I think helps the plants keep from getting bogged down with too much moisture.  The fact that the flowerbed remains somewhat dry means I can control the water over the fall and winter months.  I provide water to them about once a week or once every other week during the cold months.
Is this something you do as well? Do you keep some of summer's beauty in potted plants up near your house, in a warm, dry, sheltered spot, where they can continue growing into the winter?  If we succeed in keeping these plants alive this winter, I'm hoping to keep expanding on this idea each year.  What I'd really like to do is build a similar brick or rock wall in the garden, south-facing, with a little partial roof over it, so that we could test growing more plants outdoors in the winter - we'd have larger harvests of summer vegetables all winter long. I know a lot of people do this in a greenhouse, and that's great, but it would be exciting for me to see if we can actually grow summer plants outside with fewer resources.