A few weeks ago, it seemed like the tomatoes would never ripen, and now suddenly here we are with tomatoes everywhere in the kitchen!  I love this time of year when we can eat flavorful, juicy tomatoes from the garden. 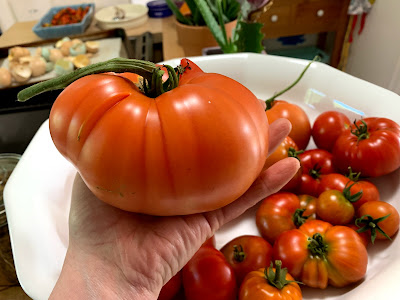 The gigantic Mortgage Lifter tomato reseeded itself in our garden from a couple years ago.  This tomato plant produces enormous tomatoes!  The variety was developed in the 1920's, and during the Great Depression it was said that growing these tomatoes could help you reduce your debt because they produced so much.  Each fruit can weigh as much as 2 pounds.

Today I had to empty the giant white ceramic bowl on the kitchen island (by processing all the tomatoes in it) so that I could make room for more tomatoes. Up until now, I had just been filling this vintage blue dish every day with our meager tomato harvests. 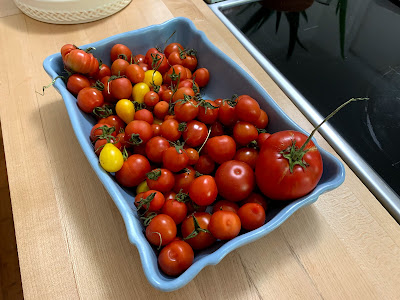 We live in a region that tends to have cooler temperatures and a fine mist that rolls in from the sea pretty often beginning in late summer.  As a result, our tomatoes tend to get blight this time of year and worsening as the weather cools.  Nighttime temperatures here have been dipping down to 46 and 48 degrees, which causes the leaves of the tomato plants to turn black and the larger fruit to get a bad spot on the bottom.  Many people cover their tomatoes in clear plastic, which helps, but since my plants are monstrous and scattered all around the garden, I just pick the larger fruit early, as soon as any blush appears on it, and set it in the windowsill.  The fruit then ripens the rest of the way indoors.  We haven't noticed any impact on the flavor by bringing them inside. 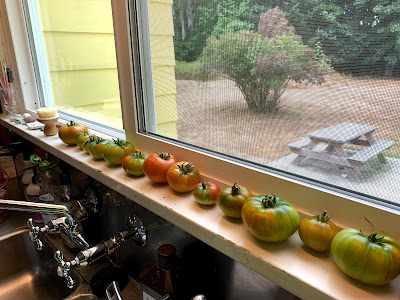 Pumpkins and other winter squash are ripening now in our area too.  It seems early, but we've already brought in a couple of pumpkins and a dwarf Hubbard squash. 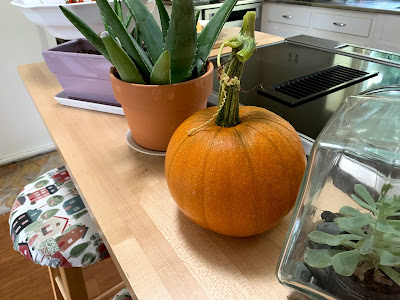 I've found that there's a cool room in our house where squash keeps very well year around, just sitting on the floor.  I put a towel or cloth napkin underneath to prevent them from molding at the bottom and damaging the floor. 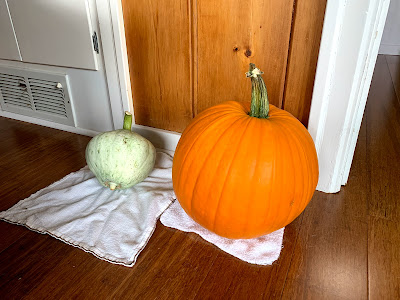 Once winter squash has ripened in the garden, we noticed that mice or rats from the community barn like to come over and  nibble on them.  To prevent that, picking them as soon as they're ripe seems to be the best tactic.  That way we can enjoy the fruit of our labors.  This will be the first year we've eaten a Hubbard squash that we grew ourselves.