It's Time for Apples and Pears 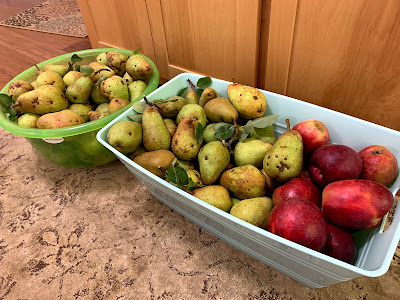 There are numerous old fruit trees on our property, including apple, pear, cherry and plum. The trees' enormous sizes and moss-covered, gnarled branches suggest they are likely at least 40 and maybe up to 70 years old.  Each year since moving here, we have been blessed with fruit from all of these old, beautiful trees.

Yesterday, it was time to harvest the apples and pears. A few of each had fallen to the ground to be consumed eagerly by the deer.  So I took our ladder out there with several buckets and began working my way around each tree, avoiding spider webs (there were several with enormous spiders on them), and using a fruit picker (one of those wire baskets on a broom  handle).  There were only 22 apples on the apple tree, but all were giant-sized.  The pear tree was loaded, however, and generously gave us about 75 pears this year.  I brought the fruit inside and put the two ginormous containers in our mudroom next to the buffet cabinet that my father-in-law, Richard, built.

The pears aren't yet ripe, but they should be ready to enjoy in about 4-7 days.  The apples, however, needed to be dealt with right away.

Today, I put those 22 apples to good use.  With them, I made 3 small apple pies to put into the freezer.  These pies get double-wrapped to protect them from frost bite.  I've done this before, and they are fantastic.  Later, when we are ready to eat one of them, we just bake it on a cookie sheet for about 45 minutes and it’s ready to eat!  I also made an oatmeal-walnut apple crisp for enjoying tonight after dinner, and another small apple crisp to put in the freezer. 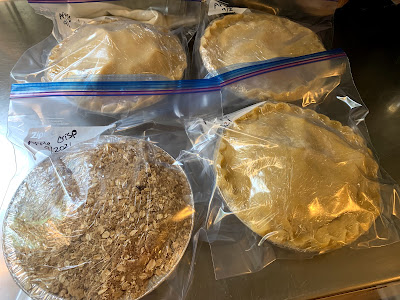 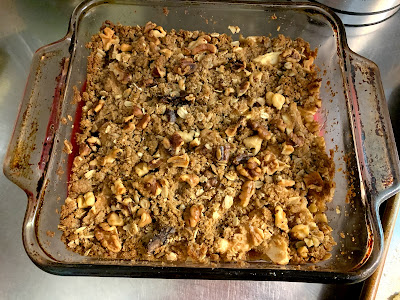 As I rolled out the crust and put it into the pie tins, there was some extra dough along the edges that I pinched off.  This extra dough got placed onto a cookie sheet, and then once done making all the pies, I sprinkled cinnamon sugar on top and baked it.  Pie crust strips, yum! 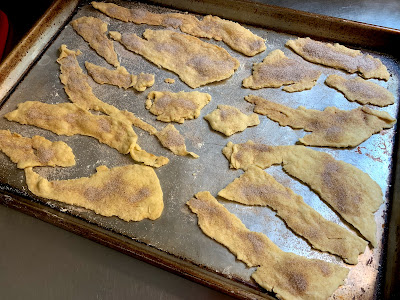 Additionally, while peeling and coring the apples, I saved the cleanest, nicest scraps for making apple jelly. From these scraps I made 6 jars of apple jelly!  One jar went right into the refrigerator for enjoying this week and the rest were processed in a boiling water canner. The recipe I used was from Pomona’s Pectin, which we love because it requires a lot less sugar than traditional jam and jelly recipes. 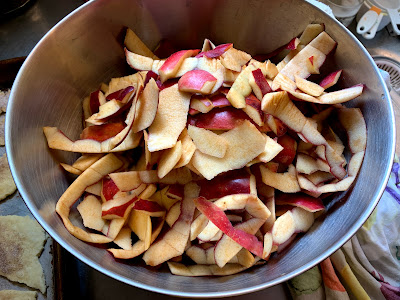 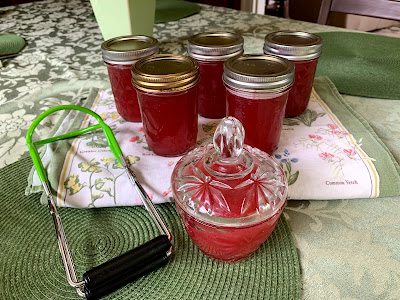 Nothing from the apples was wasted! What we didn't use to make jelly got dumped back under the apple tree for the deer to eat.  The deer have had less to forage with the unusually dry summer, and so I'm glad we can put some fruit back out there for them to eat.  After processing the apple peels to make jelly, the scraps that were strained out were given to the chickens. Don't you just love when everything can be used up and enjoyed, with nothing wasted?

By the way, the pretty red color of the jelly came from the apple peel. I always thought apple jelly would be yellow in color, and it would have been if we used green apples. But since our apples were red, we have red jelly!