Now that it's the middle of summer, I thought I'd take you on a tour of our garden.  This is a lovely stage in the garden because there are so many flowers blooming, whether it's early spring crops that have bolted or the abundance of vegetable flowers that soon yield to fruit.  Bumblebees, honey bees, wasps and other pollinators are hard at work and you can hear the buzzing as you lean down in a row.  There are also small birds flitting between the rows and hiding in the foliage.  Butterflies will occasionally flutter through and we've even seen a few dragonflies.  Deer munch around the perimeter and look longingly inside, but we shoo them away if they get too curious. 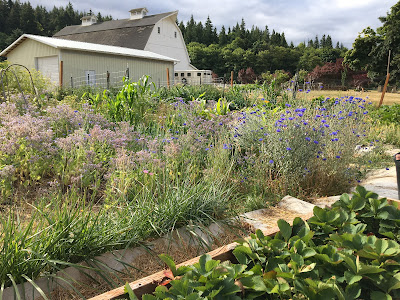 I didn't plant very many flowers this year because I knew (based on previous experiences) there would be seeds in the ground from prior years.  It was interesting to see what came up where.  Borage has filled about a quarter of the garden where I hadn't planted anything.  The bees are loving the blue flowers that cover the borage plants.  Blue cornflower is also coming up in multiple spots. 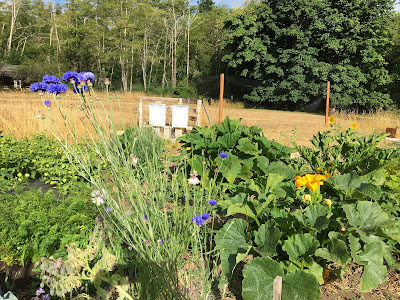 Sunflowers made their appearance in two areas where they had grown in prior years.  Amazing how these beautiful flowering plants come up every year without us having to do anything at all. 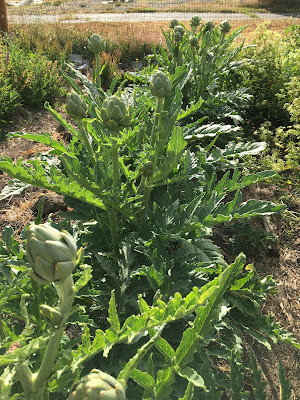 In early spring, we transplanted our artichokes into a different area of the garden where they could be tended more closely.  As a result, they have thrived and we've enjoyed artichokes with many of our dinners over the past few weeks.  In the photo above, the artichokes are still going strong. 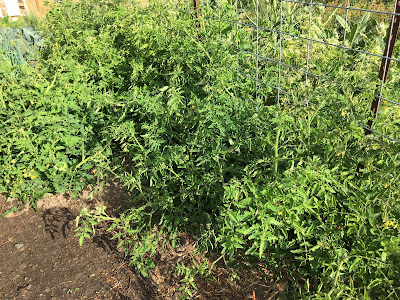 We are fortunate that our tomatoes are strong and healthy, although some do show early signs of early blight that consistently affects our tomatoes in this region.  Mainly, some of the edges of the leaves will begin to turn dark at this time of the year.  The fruit isn't impacted, though, until about October, which is after we get a good harvest, and so I don't really do anything to control it. I just plant a whole lot of tomatoes so that there will be plenty to harvest early. 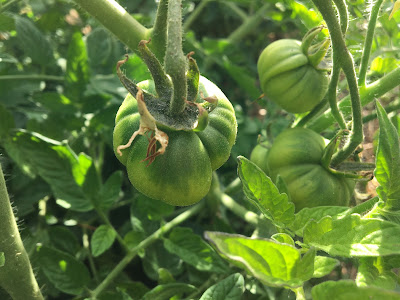 There aren't any red tomatoes yet, but there is quite a bit of fruit in early stages all over the tomato plants.  In addition to the two rows of tomatoes I planted, there are dozens of donor tomatoes growing in every part of the garden.  I don't pull out the donor tomatoes - I figure the more, the merrier! 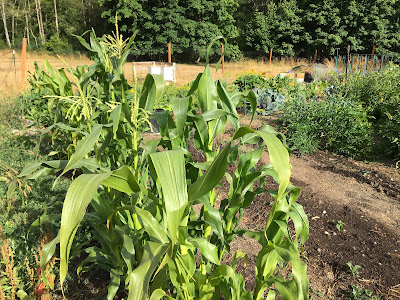 Corn is growing in four places in the garden.  This row of corn is the tallest because it was planted earliest.  There is one corn plant that came up as a donor down in a ditch in the lowest part of the garden.  It's low point in the ground is causing it to grow really well, likely because it's wetter down there. Corn loves moist soil.
We also planted green beans in multiple places.  Some are producing and others are still young and growing.  This means we'll enjoy beans throughout the summer rather than all at once. 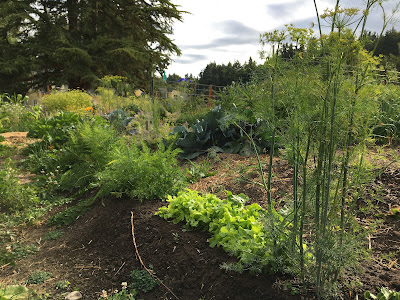 Lettuce, carrots and dill are planted in one row and they are getting along well.  It's so amazing to me that the dill is flowering at just the right time for canning pickles.  I'm hoping to can some zucchini pickles soon and they look so lovely with a sprig of dill flower in there with the spears of zucchini. 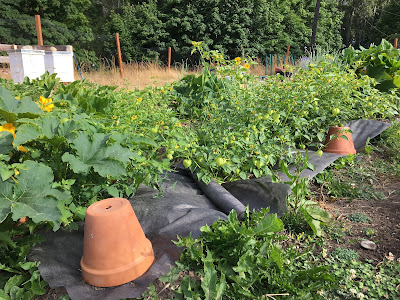 We grew six tomatillo plants and they are going crazy in the garden.  They are covered with fruit.  The fruit looks like paper lanterns with their unusual husk that covers them.  We should have an abundant harvest. 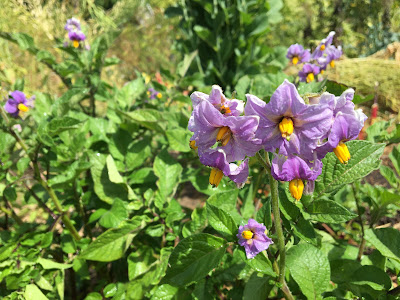 Look at the pretty purple flowers growing on the potato plants, above.  These are probably from the purple potatoes.  We've already harvested an earlier crop of potatoes, but then I planted more.  And more!  Once again, this is a crop that is growing in several places around the garden.  The ones in the photo above will be harvested next. 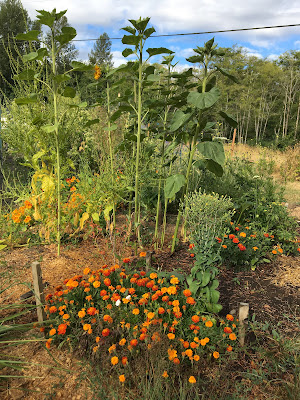 There are still some gaps in the garden where crops have finished and been pulled and new seeds were planted.  Above in an area that used to have carrots, lettuce and spinach.  It now has a mix of marigolds, squash, sunflowers and nasturtiums.  Behind it, another crop of peas were planted, and we have our fingers crossed that they will mature before our first frost in mid-October. 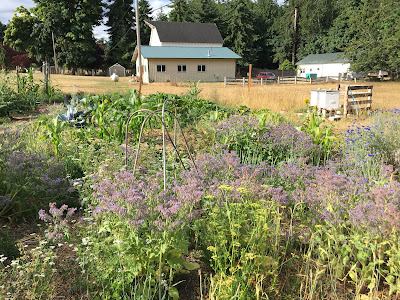 The cilantro and parsley have bolted and their flowers are hiding some plants growing underneath, such as bush beans, pole beans, rhubarb and swish chard. The garden becomes somewhat like a jungle this time of year.  In the distance, you can see our bee hives. 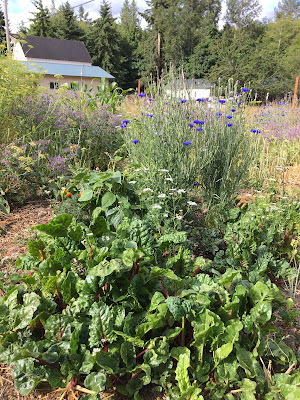 The swiss chard that's growing in the photo above decided to grow there on its own.  In that spot last fall, we threw a big pile of swish chard that had bolted.  The pile then got tilled in this spring and the seeds took hold. I wasn't surprised to find the swish chard growing there earlier in the summer.
Below, some of the squash has grown quite tall while other squash plants have remained compact and aren't doing so well.  I think that the ones along the edge are doing poorly because the soil along the edge didn't get amended with compost as well as that in the middle of the garden. 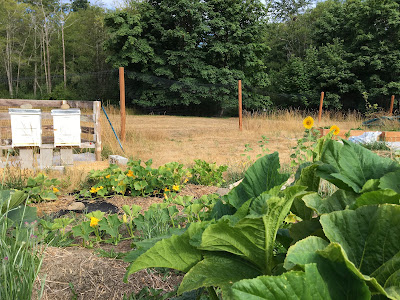 We've harvested all of the garlic and put it into a storage room by the garage. In its place, we planted beans, lettuce, spinach, squash, daisies and I forget what else. 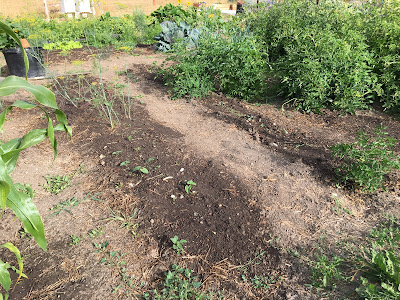 Below are some of the beans that are just now becoming ready for harvesting. 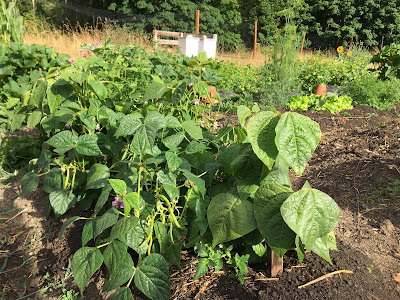 Thanks for taking a tour with me!  We look forward to harvesting and preserving from the garden the rest of the summer and into fall, and will share some recipes and experiences as we go.