The three bad boy ducks named Big Duck, Cheese and Quackers have been terrorizing not only the girl ducks but also our gentle chickens.  In their ongoing mating rituals, they're getting amorous with any kind of feathered creature, whether duck or chicken, and are getting too rambunctious about it.  Egg mishaps have started to occur daily and the hens are looking haggard from being roughly handled and chased around the coop all day long.  The poor girls don't find the boys' attention flattering to say the least and they are just plain exhausted.  It has to stop. So we separated the naughty boy ducks from the rest of the flock.  All three bad boy ducks moved out of the chicken coop and into the garden. 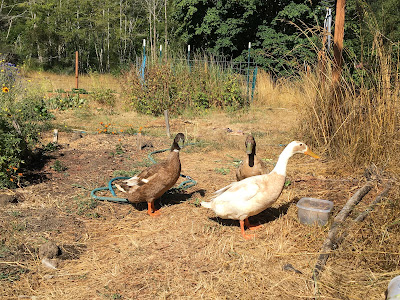 I carried each bad boy out one by one.  They struggled furiously all the way, digging their toenails into my skin and trying to pull their wings up to flap them in my face, which wasn't much fun for me, either.  All three were soon sequestered there, but as I pushed their pool through the fence opening into the garden it startled Big Duck so badly that he flew back out six feet high over the fence and into the yard. Honestly I didn't know he could fly that well and I think he even surprise himself.  Then he waddled back to the garden fence and looked up at me with big scared eyes, unsure what to do.  I managed to capture him easily enough and carried him back in to be with his brothers. 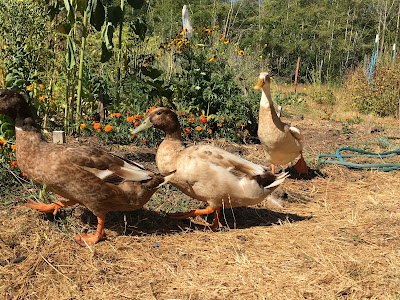 There's no overhead netting or rope strung across the top of the garden to protect the ducks from being picked up by a bald eagle, although there are many tall plants they could hide under and some narrow rows that would be difficult if not impossible for an eagle to fly through.  I'm not sure how long the ducks will survive out here but something had to be done.  When night comes, we'll get them to go inside the greenhouse and cover the entrance so they have some protection from predators.

Last night we discussed roasted duck, but unlike the bald eagles I just didn't have the heart do it, no matter how naughty these ducks are.  It's those cute faces looking up at us with their inquisitive eyes and round duck cheeks.  I wouldn't feel right eating dinner if it was leg of Big Duck, breast of Cheese or thigh of Quackers sitting on my plate.  We also discussed giving the ducks away via Craigslist, but then again, the likelihood seemed pretty high they'd just end up on someone else's dinner plate. 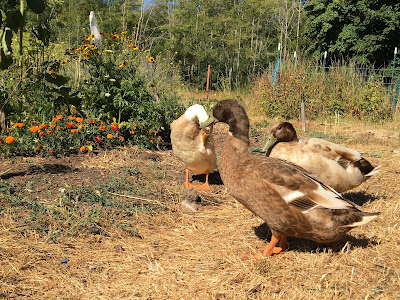 So far they haven't trampled or eaten any of our crops.  But it's only been a couple hours. They're still scared of their new surroundings as they've been hanging around the entrance, too timid to venture much further away from the opening they came through despite all the slugs and other delights awaiting them in the jungle that is this year's garden.  I've noticed that they do like the tall grass that is growing along the fence; they've been burrowing into it, snuggling down right there among the tall dry blades. 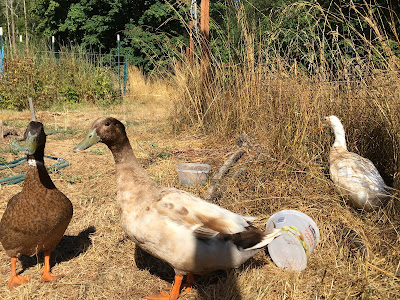 Their pool swimming pool is filled with water near the entrance and I put a container with some duck food nearby (which they've already tipped over).  We'll see how it goes. 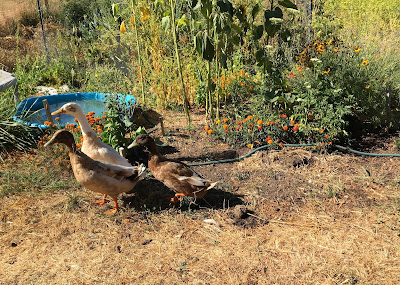