Are Record Players Making a Comeback?

I've never owned a record player but have always wanted one, and upon seeing several models at Walmart the other day, it made me wonder - are record players making a comeback?  Wouldn't the vintage sound of a record player, particularly the static that is in the background of the music, add charm and character to the afternoon as I clean the house, or to the evening when we gather around the dinner table?  My birthday was coming up and so I asked my husband if he could buy me a record player.  We weren't able to find a vintage one at any of the area thrift stores, so we picked up a cute portable record player from Walmart for $44. 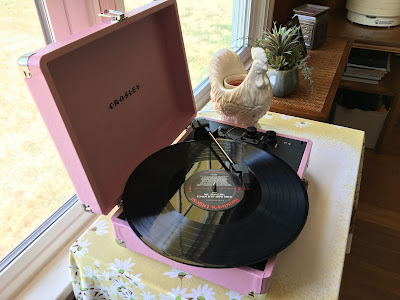 The new portable Crosley record player that we bought came in multiple vintage-styled looks and colors.  Of course, I chose pink.  It fits so nicely in our living room, but I've also carried it around to other rooms such as the parlor and dining room.  All it requires is a plug-in.

My daughter and I then headed out to buy some records from a thrift store.  We found two collections, both of which contain 1930s music.  I'm not an expert on music from that decade by any means, but I've been listening to a few playlists containing swing music and big band music on our Alexa. I figured the collections we bought would sound similar to what we'd already been listening to. 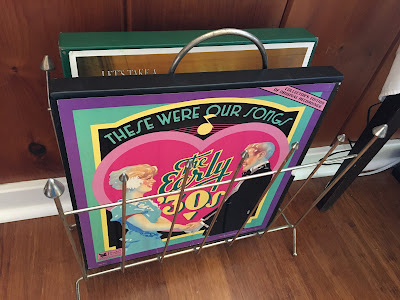 I cleaned up a vintage wire magazine holder that my grandmother had given to me years ago.  She had used it to hold sheet music.  It seemed like a perfect holder for my two record collections.  As I set the wire holder on the floor by the record player, my heart sang with joy at seeing this arrangement of vintage music and the nearby record player ready to fill our vintage home with music of the 1930s. That is, after all, the era when our house was built.

Since I'd never owned a record player before, I was a little befuddled by how to use it.  There really aren't all that many controls on it, and so it seemed overboard to read the instruction booklet that came with the device.  Instead, I just put one of the records on, set the needle at the start, moved the one toggle switch from 33 to 78 (since this was the biggest-size record, I figured the bigger number on the toggle switch was the right one to use) and turned the knob to the On position.  Away we go!  Music began to play.  It sounded kind of fast and cartoonish, but then I figured this was 1930s music, a decade not too far from the Roaring 20s when they used to dance the Charleston.  The fast pace of the music seemed about right.

About 20 minutes and several records later, my husband came into the room and asked why the music was playing so fast.  "That's how it's supposed to be," I said, and we went over to the record player to look at it.

"Isn't 78 for the biggest-sized record?" I asked, and he said he didn't think so.  We dialed it down one notch to 45.  "That does sound a little better," I told him, and we listened for a few minutes.

"It's still going too fast," said my husband, who is the mechanical expert of our house, and he switched it down to 33.  Suddenly, the song became recognizable. I looked at the record box which said we were listening to "Dancing in the Dark," by Fred Waring and the Pennsylvanians.  I realized this now sounded just like the music I'd heard on the Alexa.  Smiling rather sheepishly at my husband, I continued cleaning the house.

Later that evening, my husband asked whether I liked my new record player.  I told him that I really loved it, except that I was surprised at how few songs were on each record.

He must have realized how clueless I was when it came to record players, because he had the nerve to ask, "Are you listening to both sides?"

Indeed, I was shocked.  "There's more on the other side?" I asked, embarrassed.  I went across the room to pick up a record off the turntable, turned the record over, and of course, there was carved into it a whole set of songs just like on the first side. I felt like such a dolt, but then again, records were a new experience for me.

Since then, I've listened to nearly all of the two collections of records and am ready for more.  We dug out the dozen or so records that my husband had saved from his childhood (he's about 8 years older than me, and records were still a thing in his teen years).  I'm also looking forward to more trips to the thrift store to explore their sizable collection. Most records there are only a dollar.  I'm grateful people didn't toss these into the garbage years ago.

Truly, I think record players are making a comeback.  At least here in our home they are.