Yay, our bees arrived today! Despite our cool weather and misty rain, we went ahead and installed the 20,000 Italian honey bees into their two hives.  As first-time beekeepers, let me tell you it was a daunting task that took considerable gumption. Especially when hundreds of honeybees were flying all around and crawling all over us. I was glad we were wearing hooded bee jackets and gloves.  Our daughter joined us and took a couple photos from a safe distance away. 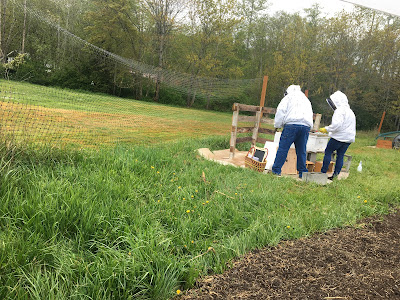 Until taking a class, I had no idea what was involved in installing a package of bees.  Once we had everything in both hives put together and ready to go, we installed the bees one package at a time.  We followed the step-by-step instructions that were provided to us by the SnoKing Beekeepers Association.

We were relieved to see that both our queens were alive and well.  Despite being a bit nervous about the bees that were crawling all over our jackets, we worked carefully and deliberately to complete each step as efficiently as possible.  As a result, we were successful in pulling out the can of sugar water from the package without letting too many bees escape.  Next, we pulled the queen cage out of the package and inspected her.  The cork in the queen's tiny little cage was then removed and we stuffed a miniature marshmallow into the cork hole without letting the queen escape.  Then we hung the queen cage over a frame in the hive and stapled it into place.  The bees will eat away the marshmallow slowly over a couple days, allowing them to get used to the queen before she is freed. 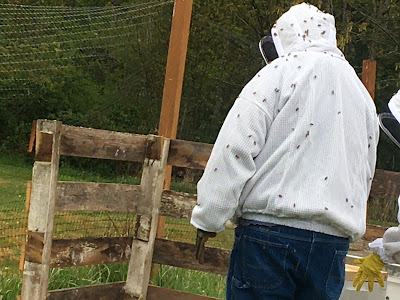 The hardest part came when we dumped all the rest of the bees into the hive.  A majority of the bees went down inside the hive, but hundreds of bees were also flying around. You can see some crawling on my husband's jacket in the photo above.  We were covered in bees.  It was hard not to have a physical reaction to bees crawling on my hood right in front of my face.  Instinctively I wanted to brush them away, but I refrained from doing so because I didn't want to drop the hive tool or knock something over.  There were also bees inside the package that refused to come out.  All of this is normal and we expected it, but it still made my heart jump as it happened.  Deep breath, stay calm, all is well.

Once the bees were installed, we set the nearly empty packages underneath the entrances to the hives.  The bees that were flying around or still inside the package should all make their way inside the hive, eventually.  Tonight, after dark, we'll go back out there and cover the entrance entirely so the bees will be stuck inside for a day or two. This helps them get accustomed to their new home so that hopefully they will stay. Also, we'll need to lift the top off the hive again after 3-4 days (in the warmest part of then day when it's not raining) to see if the queen managed to get loose.  If she didn't, we may need to do something to help.  At that point, we will be refilling their sugar water and putting a Varroa mite treatment inside the hive.  We're going to use Mann Lake Hop Guard, since it's a natural mite treatment  option and is really easy to use.

Our daughter captured a short video which I will be sharing soon, in a later post.