Getting Rid of Slugs in the Garden

I didn't think we had too many slugs in the garden this late in the winter until I went looking for them this morning.  Since we are using cardboard in the walkways as a weed barrier, with rocks and pots of plants holding the cardboard down so it doesn't blow away, I realized what we've actually done here is given the slugs tons of hiding places all through the garden. That's not to say the cardboard is a bad thing, because it does an excellent job of preventing weeds and it also keeps the soil from eroding.  However, since slugs can really decimate a garden, finding good methods of slug control are important if cardboard is going to be used.  So this morning I brought a little metal pail with me to the garden to see how many of the little buggers I could gather.

At first when I began looking for the slugs, I turned over a piece of cardboard and looked beneath at the ground.  There were no slugs there crawling on the ground. Well! What am I worried about? I initially thought, My slug problem is finally under control. Feeling excessively pleased with myself, I thought perhaps the organic Sluggo pellets that I've been scattering around the plants this winter had eradicated the slugs.  Then, half way into my search, a slug caught my eye on the underside of a piece of cardboard. Eeww. This is what baby slugs look like. 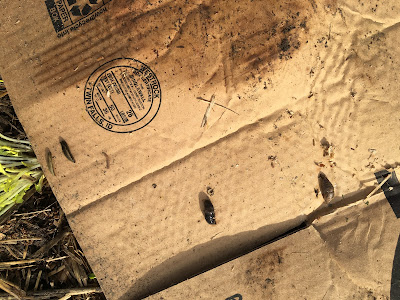 So I went back to the beginning of the garden and started looking underneath the cardboard all over again, but this time focusing my attention on the underside of each piece of cardboard.  Slugs were also affixed to the underside of the rocks and to the pots of plants that were positioned to hold down the cardboard.  With so many tiny slugs hanging out under the cardboard, likely eating nearby weeds mostly, my problems had barely begun for the gardening season. These baby slugs would grow into ginormous ugly brown slugs that wreak horrendous havoc over the entire garden. I remember only too well from last year. I can still hear my daughter's laughter as we picked produce in the summer garden, and I would throw the enormous slugs over the garden fence into our long driveway.  Every couple minutes another slug would sail over the fence, landing with a splat and sometimes even rolling across the cement driveway, where it would later be squished by one of our cars, the mail carrier or a delivery driver.  Our driveway was a graveyard of squished slugs.
After an hour of searching this morning, I had gathered several hundred small slugs into my pail. I ended up adding a few weeds to it as well. 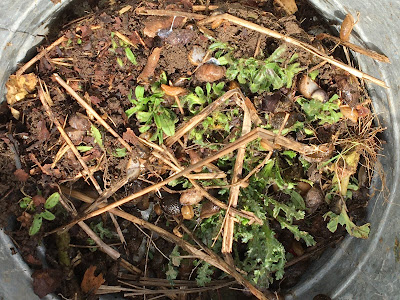 What am I going to do with this nasty pail of slugs?  My initial thought was to feed them to the chickens and ducks, but after googling if these are safe for our birds to eat, I found out that they can get gapeworm from eating slugs.  So, instead, I'll have to find some other method of doing away with these. Sprinkle salt on them? If you have any suggestions for what to do with slugs, please let me know. No one appears to cover that unpleasant part of the ordeal.
One of the people that I follow on YouTube is Huw Richards, who owns a nursery in the United Kindgom in a similar garden zone to where we live.  His video about controlling slugs in the garden is what prompted me to get out and look around for slugs in ours.  Watch the video here:
A couple other methods that Huw mentions include putting a prickly barrier around sensitive plants (an example of a prickly barrier is cut pieces of raspberry cane) and making sure grass is mowed short near to the garden.  All of the methods he offers are inexpensive or free, which I really like.  Perhaps by continuing to pick off all the slugs every week or so from the undersides of the cardboard, we'll get ahead of it and not see as much slug damage on our garden plants this year.  And I can hopefully stop buying as much of the organic Sluggo pellets as well, since they are expensive.