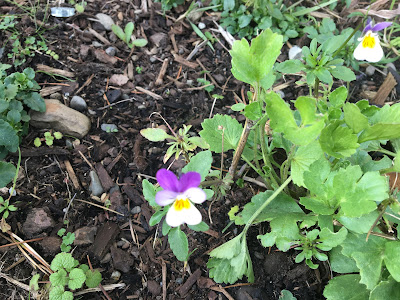 The sun is back out and all the snow has melted.  It feels like spring is on its way.  We are relieved to report that everything in the garden survived the cold spell we had last week.  While many areas across the U.S. experienced extreme cold, temperatures here only dipped down to about 27 degrees F during the evenings, which is a lot warmer than had originally been predicted.  I'm pretty sure we might have lost some of the garden if temperatures had gone as low as the teens. Mother Nature was kind to us this time around. We're grateful to still have the winter garden going strong.

It's much warmer this week, getting up near 50 degrees. With our home facing the south, the sunshine streams into our windows, allowing us to turn off the pellet stove to take advantage of the natural light warming the house.  Even though it's cold in the morning, I wait to build a fire until later in the afternoon, when the sun has dipped behind the trees and a cold shadow falls on the house.

The creek is running much higher than usual, but even so it's still far from breaching its banks. We've also noticed that hundreds of robins have migrated here and are busy digging in our yard, looking for worms. I've never seen so many robins congregated in one area.  I tried to take some photos, but their bodies blend into the ground in the pictures.

Our ducks have started mating in earnest. All day long, they practice their mating rituals.  Animal mating rituals never bothered me before, in fact these kinds of things can be kind of interesting.  But then again I've never witnessed it with ducks.  The boy ducks are obnoxious.  I won't go into the details, but let me tell you it is rather appalling and I feel badly for the girl ducks.  I've actually gone out there a couple times to break things up.

One bright point about the ducks is that the girls have started laying again. We've had 4 eggs over the past week from them.  So it's not every day, and perhaps not all three of them are laying eggs yet.  Their eggs have appeared on the floor of the hen house and out in chicken run, just laying there in the dirt.  It makes me wonder how the egg was laid - did she even lay down and nest a while, or did it just fall out?  They have plenty of nesting places should they choose to lay somewhere comfortable.  Such odd creatures.