Yesterday morning I made traditional sourdough bread without using a recipe. Feeling lazy and deciding to try winging it, I figured traditional sourdough only contains three ingredients and so how hard could it be to get it right without measuring? It's just flour, water and salt.  So I put a couple scoopfuls of flour into a big bowl, added a little bit of salt, dumped in some bottled spring water, and added the sourdough starter (which is actually made with only fermented flour and water).  Then I stirred it with a big spoon and continued to add more bottled water until the dough reached a really gooey consistency that I liked. I did not knead the dough. I literally spent less than 5 minutes making this dough. 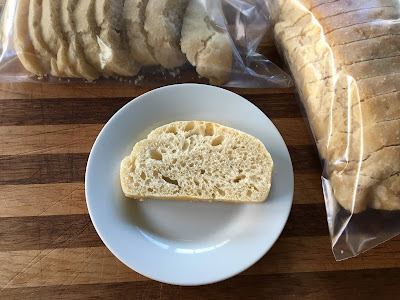 After the dough was well stirred, I put a lid on the bowl and placed it on my seedling heat mat (here's the article that explains why I use this), covered it with a pretty kitchen towel and tucked it into the corner on the kitchen counter.  Two hours later I came back and checked on it.  It had risen nicely.  So I took the dough out of the bowl, stretched and folded it twice (it was pretty gooey, so I streched and folded it quickly), and put it back in the bowl. I did this because apparently stretching and folding the dough helps add air and volume to it, following the Full Proof Baking method that our friend Stuart shared with us. I very loosely follow their method, taking the lazy approach and stretching the dough only once or twice before baking it.

Two more hours after that, I took the dough out, stretched and folded it again, divided it in half and placed it into two loaf pans lined with parchment paper. I spread the sticky dough out into the pans as best I could.  Then I covered the pans with saran wrap, placed them on the seedling heat mat, covered the whole thing with the kitchen towel, and let it sit in the corner again for a while.

Later that night, I remembered that I hadn't yet baked the loaves of bread. I think the dough had been sitting there for at least 8 hours since I last checked on it.  So I preheated the oven to 425 degrees F.  Before putting the dough into the oven, I took a slim knife and stabbed the tops of each loaf very lightly in 5-6 places each, going only slightly into each loaf (maybe 1/8 inch deep) so that the bread would not get huge air bubbles on top.  I hate when air bubbles happen on top of the loaf as it makes the top crust come off the loaf when you are slicing it.  Then I baked the loaves of bread for about 25 minutes.  We like our bread kind of light and very soft, so I checked it toward the end of baking to make sure it didn't get browned too much.

After removing the bread from the oven, I took the bread out of the pans and put them on a cooling rack. Then I simply covered the bread with the kitchen towel and left it sitting there to cool overnight.

This morning I sliced both loaves of bread and put them into gallon ziplock bags.  My daughter ate a couple pieces with butter and jam this morning and reported that the bread was amazing; she said the taste and texture were like something I had bought at a store or a restaurant.

If you're thinking sourdough is hard, let me tell you, it's one of the easiest homemade things I have ever made.  It is especially easy if a friend gives you the sourdough starter to get you going, which is what happened in my case.  I highly recommend giving it a try. One tip: Just be sure to use unbleached flour and spring water (instead of tap water) to avoid any traces of chlorine getting into your bread and destroying the wild yeasts that cause it to rise.