Little Red is the latest hen in our flock to molt this year. The poor hen looks bedraggled with her long tail missing and all those glorious red feathers dropping everywhere in the chicken run.  Her fluffy white under feathers are peeking through the red, like a tattered dress with the petticoats underneath now visible. The simple act of pecking the ground causes more feathers to fall from her body, drifting to the ground.  If she's hung out in one spot for a while, once she steps away from that spot it looks like a bird was murdered there with all the feathers laying in a circle. 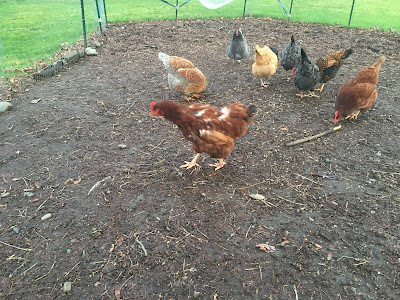 Little Red has grown so skittish that even trying to capture a photo was challenging this morning.  She was a blur as she kept running away too quickly. 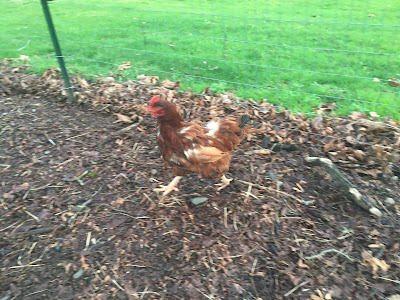 Sadly, poor Little Red has become shameful of her appearance after numerous days of being chased off by the other hens. We're always a bit sad to see another one of our hens going through a molt.

Chicken behavior is interesting to observe. The concept of pecking order comes from chickens.  Our hens have definitely developed a pecking order in their flock.  Groups of hens band together and those with higher ranking chase off the other hens in order to hoard the feasting of the best spots.  Those with lower rank are easily deterred when a higher ranking hen walks by.  Each grouping of hens hangs out together, eating and sleeping in clusters.  At bedtime, if a lower ranking hen tries to get onto the roost near to royalty, she's pecked and shooed away on down the long roosting board to the end.

Most of the ranking is based on the hens' ages, but a couple of young hens managed to break through to rise to the top.  Little Red is a young hen who rose to the top, where until recently she hung out with Amy (one of our original hens), Angel and Big Bird.  Now Little Red slinks away and is at the bottom of the scale, hiding out with Cress, Foghorn Leghorn, Beaker and Cheech.  Then there are the two Barred Plymouth Rock hens who think they are ducks after being raised in a brooder with our first three ducks.  Those two hens avoid the ranking altogether by following the ducks around and hanging out by the blue pool.

One other hen who doesn't quite fit the ranking system is Miss Prissy Fuzzy Bottom.  She seems to go wherever she wants without any consequence. Miss Prissy Fuzzy Bottom is a challenged hen with a distended crop that droops out the front of her chest like a single gigantic boob. She had sour crop and nearly died two years ago, but then she rallied and manages to keep on going. We refer to her as a "strong independent woman." She is occasionally fed kombucha scoby and yogurt to help balance the enzymes, bacteria and yeast in her crop, which has helped her stay healthy.  Miss Prissy Fuzzy Bottom's exuberance for life is a joy to watch. Somehow all the hens know she's different and they give her freedom to do as she pleases, avoiding pecking her and letting her eat and sleep where she wants.  She chooses to hang out in the midst of everything where all the action is.  She's also first to get any treats--but only because she runs and dives toward treats, flinging her body forward.  When Miss Prissy Fuzzy Bottom hears the back door open, she comes running so fast that her behemoth boob swings side-to-side as she careens toward you and dives into the food you've thrown. We're not sure how she manages to stay on her feet when that boob swings so hard and high that it leans her body low to the ground. If you throw her a scoby, she snatches it and runs off.  Other hens chase her for a while, but the lure of more food elsewhere causes them to give up. Thus Miss Prissy Fuzzy Bottom stuffs her crop so full of food all day long that her boob is enormous by bedtime. It gets so big that she has to nudge it upward with her chicken knee (do chickens have knees? Prissy seems to), so she can bend over to see the ground. 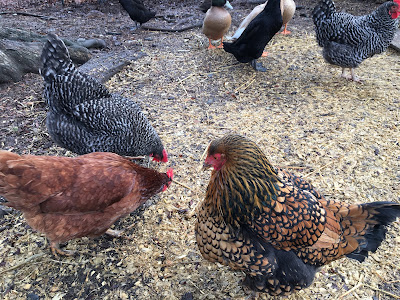 The pecking order that the hens established is temporarily disturbed whenever a hen is molting.  In the case of a molting hen, all rank is lost, and she is forced to the bottom, pecked and shunned, shooed away by all the others.  She sleeps off to the far end of the roost where she is not picked on as frequently. She hides in the henhouse during the day.  At feeding time, she's careful to stay on the fringes of the scratch grain that's being tossed around, so as to avoid the other hens who will angrily peck and chase her.  She goes to the pellet feeding stations only after all the other hens have had their turn.

The molting process can take a couple months, which is a long time for a hen to be bullied by the flock.  During molting, the hen stops laying eggs. Can you blame her?  All her energy and nutrient reserves go into producing new feathers.  And honestly, I think she feels too depressed to have any enthusiasm left for egg laying. We watch the molting hen with sympathy, offering her extra secret handfuls of scratch grains that the other hens don't see.