Those Aren't for Hitching a Horse

December 30, 2020
When we first toured our property before we bought it, we came across these hooks in the ground near the back door of the house. Upon seeing those, my first thought was that perhaps one day long ago people used to hitch their horses up close to the house so as to go inside for a spell.  But I quickly learned that those unusual-looking hooks in concrete blocks by the back door weren't used for hitching horses. Nope, that there is the septic tank.  The hardware is used for lifting the concrete lids up so that you can pump out the sludge inside.

Yesterday, we had the unfortunate experience of getting up close and personal with the septic tank.  While there are three lids, I learned that there are actually two tanks. One tank has two lids and the other has one bigger lid. 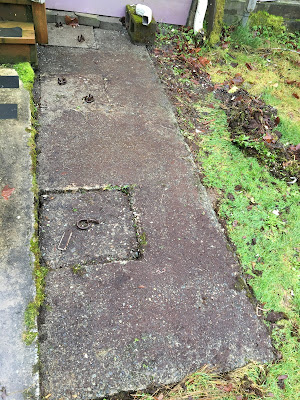 The whole area was completely covered by moss until yesterday.  The area closest to the house had mud on top, at least for a while I thought that was mud. It wasn't. I learned this when I had to get a shovel and scrape the entire area clean after we dealt with an overflow. I also had to move a bunch of blocks that were covered in sludge.  Off to the right you can see where the moss had been scraped to.

What you're seeing are the after photos.  I was too traumatized yesterday to take photos of the during part.  Suffice it to say, it was revolting, and I spent hours cleaning, disinfecting and deodorizing everything to try to make the house smell better.  Who knew a little spill outside could make a house smell so bad inside.

It was the tank closest to the house that overflowed.  There was about three inches of muddy-looking brown sludge over the top of the lid by the house when the septic service arrived to help us out.  Thankfully they got here within hours of our call.

Since this is 2020, I feared the worst news, but we escaped relatively easily on this issue thank goodness (knock on wood).  It turns out that inside the septic tanks there is a connecting pipe that's about 4 inches in diameter.  It connects the two tanks.  Sludge is supposed to flow from the tank closest to the house out to the next tank further down, and then water is supposed to drain away on further to the drain field.  The connecting pipe had narrowed like arteries do when they build up with too many deposits.  The connecting pipe was most of the way blocked off.  We were assured that this didn't happen due to anything the lady of the house or the child might have done; rather, it's an old pipe and this is a natural occurrence over time.  The brave fellow who came to help poked a long metal pipe he was carrying down into the hole of the connecting pipe and broke a bunch of the built-up crud loose, allowing things to flow again.

Our sign that there was a problem strangely wasn't the disgusting smell out in the yard.  Concrete septic tanks like ours tend to smell from time to time, after all.  It also wasn't the muddy-looking substance over the top of the one tank. (How could we miss that?)  No, what signaled to us there was something amiss was the way the toilet downstairs was belching.  If you ran water in the bathroom sink for a while, the toilet began to off-gas these horrifyingly huge air bubbles. At first, we weren't sure whether to call a plumber or a septic pumping company.  We decided to focus on the end of the line and called the septic company, since anything blocking escape out there could cause more of a mess in here.  It turned out to be pretty good thinking, this time around anyway.