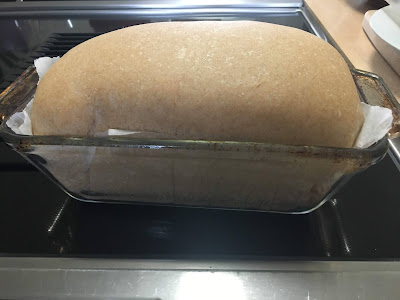 I've been baking sourdough bread with starter for long enough now to have come across what I find to be the easiest, most consistent and tasty recipe. It's time to share! The recipe I'm using started as a dough for making cinnamon buns, which I found on the King Arthur Bread website. But then I altered it (of course!) to make it lactose free, replacing the milk with soy milk and the butter with canola oil.  Then I tried using the basic dough to make not only rolls but also bread, and it came out light, soft and incredibly yummy! In the bread version, I omitted the sugar from the recipe.  I've then used this recipe to make bread that has herbs in it as well as bread stuffed full of roasted garlic.  Then there was the sweet version of the bread that had a swirl of cinnamon, sugar and chopped walnuts rolled up into it.  One day I patted little balls of the dough into rounds and placed them into a greased muffin tin, brushed the tops with a little olive oil and garlic powder, let it rise, and after about 18 minutes of baking we had dinner rolls. As you can see, this one sourdough cinnamon bun recipe has served nearly all of our homemade bread baking needs! And I love that all this homemade bread goodness is made with sourdough, which is better for our tummies and our health thanks to the prebiotics it contains! 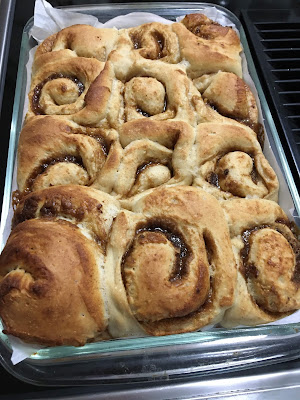 Okay, so here is the golden recipe. Rather than trying to make it into my own (which it's really not), I'm sharing with you a link to the original sourdough cinnamon bun recipe from King Arthur Flour, which serves as the basis for making all my wonderful variations of sourdough bread.  Again, note that you can easily turn this into a lactose free (dairy free) and vegan recipe by swapping out the butter for olive oil or canola oil (using the exact same amount as the recipe calls for, in both the dough and filling).   In the icing, you can replace the butter with shortening.  As for the salt, since we are conscious of how much salt we are consuming each day, I reduced the salt in the recipe to 1 teaspoon and it came out tasting just fine.  But if you aren't worried about salt, the recipe is fine as-is. 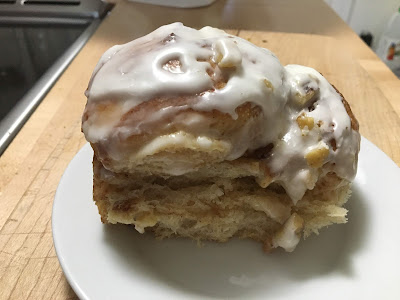 If you make a savory version of the dough, leave out the sugar that's listed in the dough ingredients.  I've found that 1 teaspoon of dried herb is enough, and it can be mixed in during step 1. 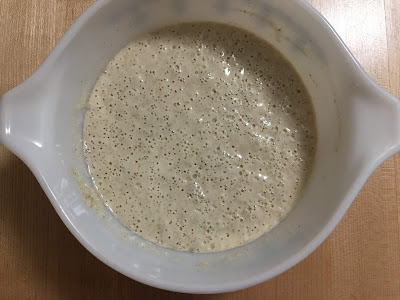 To get my dough to rise more quickly, I use a seedling heat mat.  See my article about how I am using the seedling heat mat with dough - it's one of the best secrets for bread baking that I have to offer you! 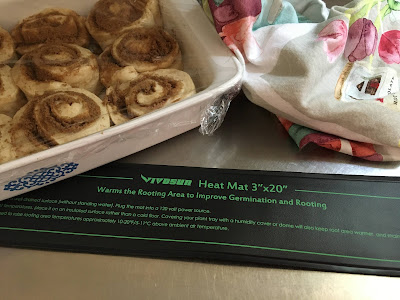 One other note about making bread or rolls using this recipe.  I have forgotten to stretch the dough over the long rise period that is mentioned in Step 4 and the finished bread still came out wonderful.  So if this recipe seems difficult because of the need to stretch the dough ever hour during step 4, then don't bother stretching it. Make the dough without doing that step. The result will still be a very soft and tasty bread.

If you want to make bread with roasted garlic stuffed into it, then make the dough through step 4.  Then, stretch/roll out the dough into a rectangle and place pieces of garlic over the surface (your garlic should be well roasted so it's very soft).  Then roll the dough up and put it into a loaf pan lined with parchment paper. You can also brush the entire surface of the dough with olive oil and sprinkle garlic powder over it.  Let it rise for at least 1 more hour (any time you handle the dough, it needs to proof again before putting it into the oven to bake). The baking time for a loaf of bread is about 40 minutes at 400 degrees F.  When using a loaf pan with sourdough, I recommend always using parchment paper so that your bread doesn't get stuck in the pan.

If you want your sourdough to be round and crispy, let it rise in a parchment paper lined round bowl.  Meanwhile, preheat a cast iron Dutch oven (by putting the empty Dutch oven into your oven for 1 hour at 400 degrees). Then use hot pads to carefully pick up your dough by lifting the parchment paper, slip the whole thing (parchment paper included) into the Dutch oven and put the lid on.  Bake with the lid on for 20 minutes, then remove the lid (using thick oven mitts) and bake another 20 minutes.  You'll have a nice crispy crust.

Leftover bread keeps very nicely in a sealed container or ziplock bag on the counter, but the bread can also be refrigerated.  I've found that when left on the counter, the flavor of the sourdough (the sour taste) intensifies with each day.  If kept refrigerated, that process slows down and the bread stays sweeter.

Coming up next...I'm going to make a plain sourdough bread with this recipe, and then when it's done I'm going to cube it all up. Then I'll dry the cubed bread on a couple sheet pans in the oven at a low temperature for a while.  This will be the breadcrumbs for making dressing to go with our turkey on Thanksgiving....