It's Time to Plant Garlic

We almost forgot to plant the garlic! October is the month when garlic goes into the ground and then it is harvested sometime around June or July, depending on your garden zone and how well the garlic is growing in your location.  Last year, our friends Dan and Debbie gave us several heads of garlic from their garden to get us started along with instructions on what to do.  Thanks to their contribution, the garlic did fantastic in our garden. 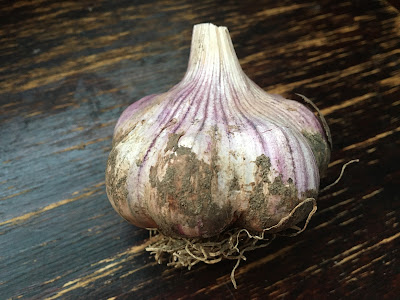 After harvesting our garlic, we learned that the little "bulbils" that grow on the top of the garlic scape (inside the flower) can be planted as well.  So this year we are going to try planting bulbils as well as full cloves of garlic.

Most people only ever plant fully mature garlic cloves, which are the cloves that we normally eat.  Each garlic clove will yield a whole new head of garlic at the end of the growing season.  The little bulbils that are in the flower at the top of the plant can be cultivated as well, but these little bulbils will yield a very small head of garlic at the end of the growing season. But, if you then replant those small cloves of garlic the following October, with care in year two they will yield a slightly larger head of garlic, and in year three an even larger (often normal sized) head of garlic. So with some patience, the garlic harvest can be exponentially bigger over time by including bulbils as well as mature cloves.

Below is a photo showing all the saved parts of the garlic that can be used for planting: starting at the top left and going clockwise, there is a whole head of garlic (which would be broken apart into cloves that are planted individually).  To the right of that are mature cloves that have been broken off the head, and then there are two sets of bulbils not yet broken apart. And then covering the lower half of the plate are hundreds of little bulbils that I've already broken apart from the bulbil cluster. 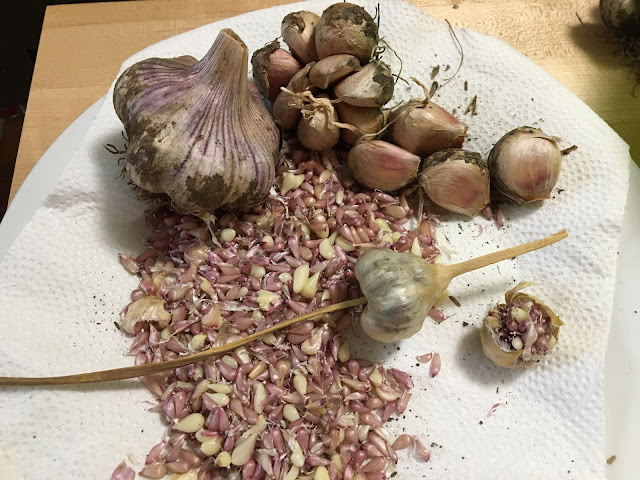 As you can see, while each garlic head only has 8 to 10 cloves of garlic that can be replanted, while each bulbil cluster has maybe 20 or more bulbils in it.

Some prep work was required to plant the garlic.  Finding room in the garden meant tearing out some of the summer crops that were finished.  The space below used to have pumpkins growing in it.  I dragged the pumpkin vines out of the garden, piling them up in the grass off to the side.  Then I used a rake and shovel to fluff up and straighten the soil in the rows, creating two and a half garden beds of deep, soft, well-draining soil. After that, I rearranged the straw that was already in the pathways between the rows to act as a weed barrier. Our soil was heavily amended earlier in the season and so I didn't feel the need to add any fertilizer yet. 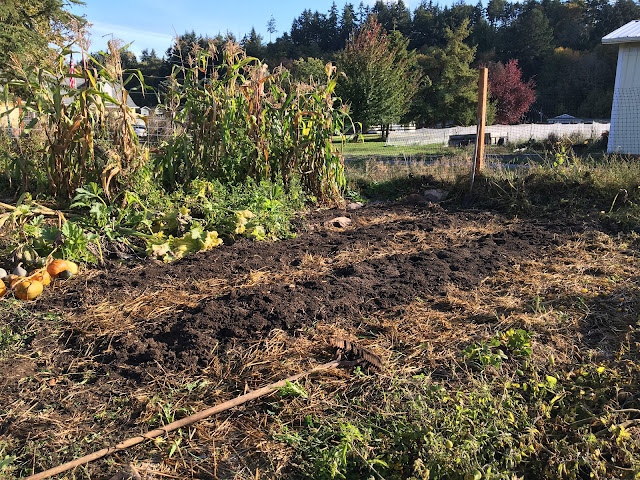 One row was planted with large garlic cloves and the other row and a half were planted with the bulbils.  Then the soil was well watered.  Now we just need to wait and watch for any signs of growth. We'll also apply fertilizer (something high in nitrogen) to the soil in early and mid spring.