Just the other day we finally determined that all three of our ducks are males, and as fortune would have it, my incredibly resourceful husband then came across an ad on Craigslist for three free female ducks. He was the first to call about them. Yay! Yesterday I brought the new ducks home and put them in our chicken run.  All three are black runner ducks.  I'm still in awe over how quickly we ended up with female ducks! And that there are three of them to join up with the three boys! 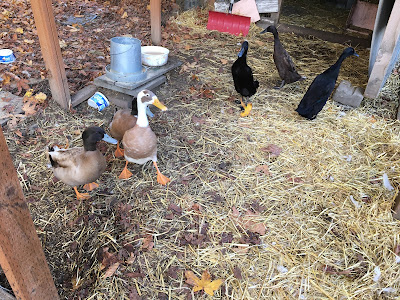 The male fawn runner duck has shown great interest in the three females. Normally the three male ducks stick close together all day long.  I've noticed the fawn runner duck breaking apart from the boys to go over and check out the girls. Shall we play a little Marvin Gaye - Let's Get It On? 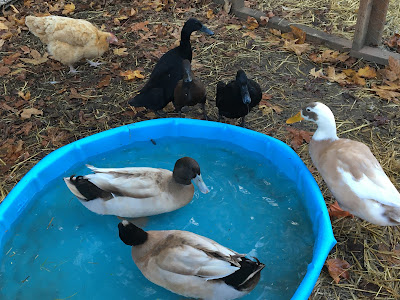 Adding the three girl ducks into the fold was easy-peasy.  There was no fuss whatsoever. I was amazed that the chickens seem okay with the addition to the flock. Perhaps the fact that there were three joining in (rather than just one), it helped prevent any bullying.
Now that we have female ducks, the differences between the genders are very clear.  As you can see, the female ducks are more slender than the males.  We can clearly hear that their quack is short and sharp, where the male quack is a long raspy sound.  We can observe that the females' tails go strait down with no curl, where the males have curls on their tails.
This morning when I let the chickens and ducks out of their coop, I discovered two green duck eggs on the floor of the coop.  Anna, who gave us the three girl ducks, let me know that the ducks typically lay their eggs in random places, usually on the floor of the coop, and that the eggs are green, so I was certain what these were. I brought them into the house straight away, washed them and put them in the fridge to keep them separate from our other eggs. We'll wait until my husband gets home tonight to eat our duck eggs so he can try them out for the first time with us. 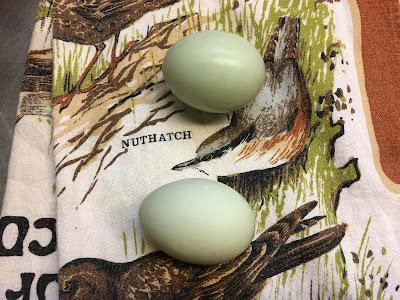