Before and After: Flowers by the Front Door

July 11, 2020
We were looking back through photos of the house and property from when we first bought this place 3 years ago to now, and it's amazing how far we've come during that time.  There have been both major updates to the house and many small improvements as well.  One small change we made was simply cleaning up the flowerbed at the front of the house. Below is a photo of the flowerbed in 2017 before we did anything to it. 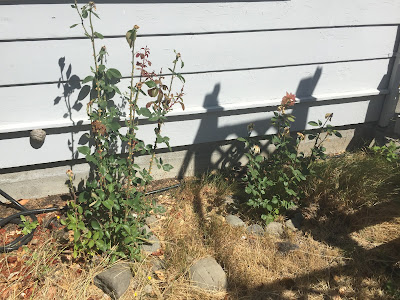 As you can see, the little flowerbed had been neglected for years and it showed.  It had multiple problems, the first of which being that the flowerbed had been lined with landscape fabric and then covered with rocks.  As time marched by, grass then grew over the rocks.  Because of this, weeding was going to take a lot of effort.  Additionally, hornets and wasps had built nests in the ground and on the  siding of the house.  Needless to say, the flowerbed was not an inviting spot.
We finally cleaned up the flowerbed this past April. Alternating between using a shovel and getting down on my hands and knees, I removed all the grass and weeds that were ensnared around the rocks.  Once the weeds and rocks were removed, I then transplanted herbs and flowers from the garden into this space.  I also pruned the roses and put down a thick layer of bark dust mulch. 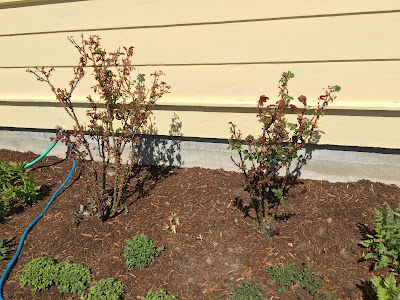 Mother Nature then gets credit for the transition of the garden from when it was cleaned up to what it is today. As you cans see from the photo below, the sweet williams, herbs and poppies have grown and now fill in the space around the roses. With the thyme and oregano planted here, along with the roses and the sweet williams, this is now a beautiful and fragrant garden to enjoy. 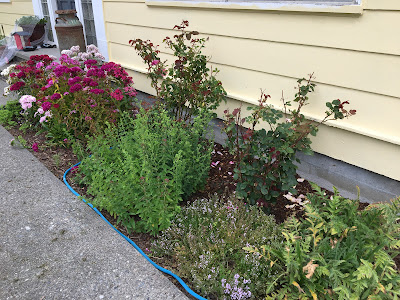 Deer have been coming by to munch on the rose bushes unfortunately, which keeps them trimmed back.  But otherwise the flowerbed has gone from being an eyesore in the past to an attractive garden today.