June 22, 2020
"Organized chaos" is how I would describe our garden this year. We planted seeds in neat and tidy rows and then Mother Nature had other ideas, sending up veggies and flowers from prior years in a willy-nilly fashion, as can happen wherever stray seeds that were already in the soil take root, perhaps scattered there by birds or because we tilled the soil and the seeds from rotted fruit left behind from the prior harvest were spread around.  These are Mother Nature's gifts and they are intermixed everywhere. 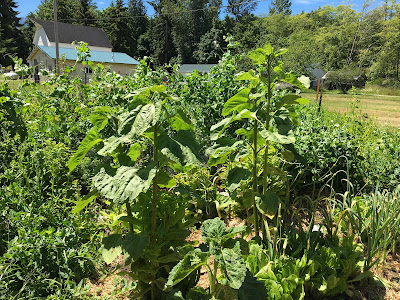 Some of the surprise plants are even coming up in the aisles.  We've let them be, these little extra treasures because eventually they will become part of our bounty. 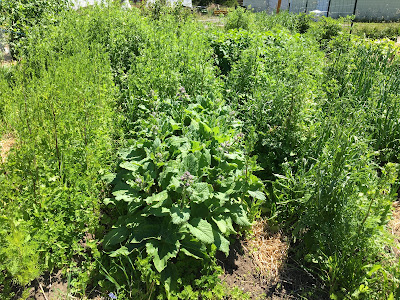 Thus the garden that was once organized has become a riot of overgrown vegetables and flowers.  And I have to remind myself that this is just the beginning.  Flowers aren't yet blooming, but when they do there will be bees buzzing around making it difficult to go into the crowded aisles between each row. Among the flowers we planted in the garden are zinnias, marigold, cosmos, cornflowers, poppies, and a mix of other wildflowers. 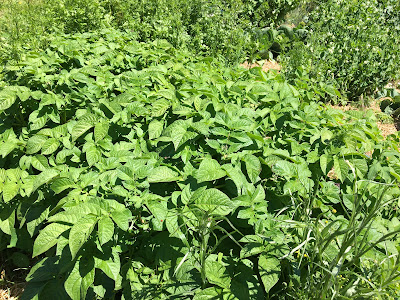 Above is one of our patches of potatoes.  We've started to harvest some of the young potatoes - they are so good! There are both red and yellow potatoes in the patch. 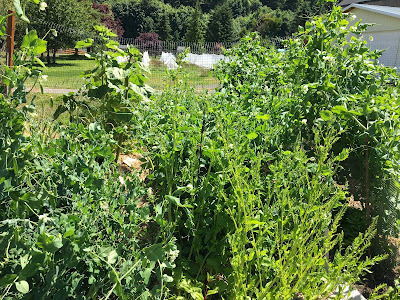 Peas, spinach, swiss chard, lettuce and sunflower are growing in a tangled, wild fashion. This late in the spring garden, most of the spinach and swiss chard is beginning to flower. That's okay; I have plenty of both in my freezer, as I blanched and froze small packages of greens for us to eat later in the year. 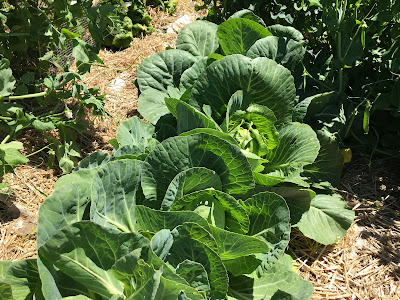 Above is a section of our small cabbage patch. We didn't use row covers this year to protect the cruciferous vegetables from cabbage worm because we wanted to watch the plants grow and begin harvesting as soon as things were ready.  Last year, I didn't notice the broccoli had flowered and so we missed out on some of the harvest. So far the cabbage worm hasn't interfered too much. 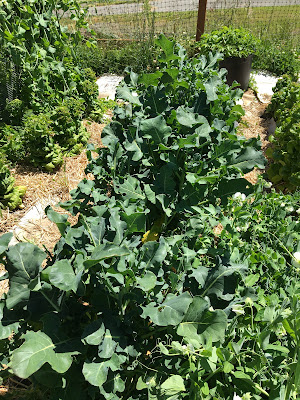 Above is the broccoli patch.  We pick from it every other day and we have been enjoying eating some of the tender broccoli leaves, too. 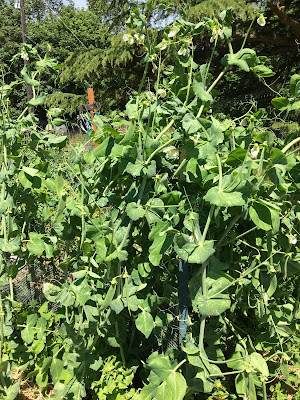 This year we planted three types of peas. Above are Tall Telephone Peas, which grow up to 6 feet tall and have enormous pea pods.  The wind keeps knocking some of the peas over; I've reinforced them several times to try to keep them going. 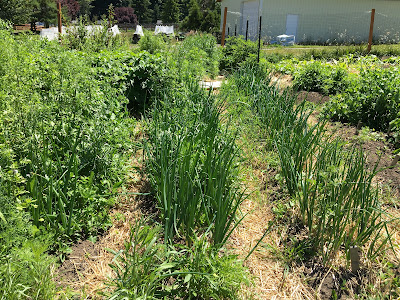 A portion of the onion patch is above. We've been eating the green parts as pseudo green onions, picking only one green stem from each onion bulb periodically. Flowers, herbs and tomatoes are growing in among the onions we planted, all of which are donor plants from Mother Nature. 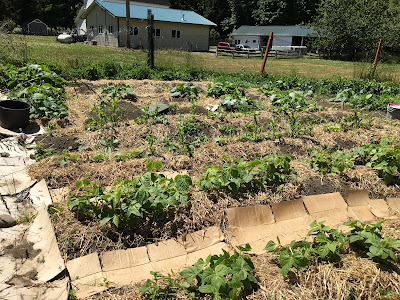 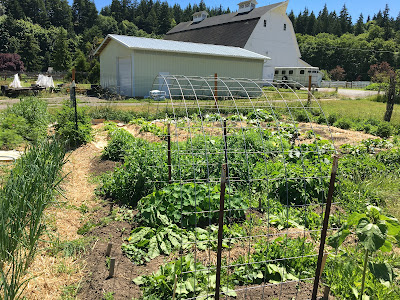 We also have many herbs interspersed throughout the garden and near the house, including basil, dill, sage, parsley, cilantro, oregano, thyme and borage. And by the house there is another garden patch with sunflowers, wild flowers, wheat and quinoa; I will share photos of these soon!