April 01, 2020
My mother was known for offering folk remedies whenever anyone in the family was ill.  At times we teased her for it, but the truth is, my mother's lemon and honey concoction worked wonders at soothing my own childhood sore throats and colds.   My mother's recipe involved cutting up a whole lemon and cooking it in a saucepan full of water on the stove for a few hours.  Once it was finished cooking down, she'd use a fork to press out as much of the pulp as she could from the lemon and then discard the rind.  Then, she'd add honey - a LOT of honey, perhaps half a jar - and then this lemon-honey syrup was refrigerated.  To serve, she would put a couple tablespoons of the lemon-honey syrup in a mug and then fill the mug the rest of the way with hot water. While my mom's remedy was great, as an adult who is feeling ill, I usually need a lemon-honey concoction immediately and don't have the energy when I'm sick to cook a lemon into syrup. About a year ago, I began using a simpler and more potent version of her lemon and honey. I just squeeze a little bit of lemon juice into a mug.  Next, I add a tablespoon of honey and a quarter teaspoon of powdered ginger, and then fill the mug with hot water.  The ginger gives the hot beverage an amazing boost and opens up my sinuses at that same time. It's a powerful brew that I enjoy drinking any time my system feels a little run down. I've also used this beverage to soothe gas pains.
One day when I was drinking my lemon-honey concoction, I began considering other herbal remedies I might try.  I've been having difficulty sleeping due to back pain, and after multiple visits to the doctor and chiropractor I've learned it's due to a degenerative disc in my neck, which is causing the muscle spasms in the middle of my back.  Unfortunately the doctor and chiropractor didn't have anything to offer me that I found helpful, and so I've turned to relaxation exercises, good posture, and an herbal remedy: Valerian root.  After a bit of research, I learned that Valerian root is known for helping with relaxation and sleep*.  I was surprised to learn how easy it is to make a Valerian root tincture.  Here is the video that I enjoyed most as I learned how to make it:
4 Herbs to Help You Fall Asleep
I'm rather proud of my little jar of Valerian root tincture.  So far it has helped me immensely and I have been fortunate to experience no side effects.  On evenings when my back has been bothering me, I take a quarter teaspoon of the tincture, which I stir into a little bit of water before drinking it down. I sleep like a baby and wake feeling refreshed.
If you are interested in trying it, you should be forewarned that Valerian root smells terrible, somewhat like Robitussin.  If you have a weak stomach, you might not want to try it. The root can also interact with certain medications, and so you should ask your doctor about it before attempting to try it. Also, rather than trying to grow it, I found that it is actually a fairly inexpensive herb that can be purchased in many herbal stores. I purchased an ounce of it from Countryaire market, a local store that has an herb and tea counter. Another great source for dried herbs is Mountain Rose Herbs, and you can purchase their herbs online.
Since making the Valerian root tincture, I've gotten a bit bolder in examining herbal remedies and a friend of mine has been helping.  With her guidance, I was able to identify two plants for foraging:  purple dead nettle and stinging nettle.  I've gathered some of both and the leaves are now drying on a table near the window in the Corral (our TV room) for being made into tea. 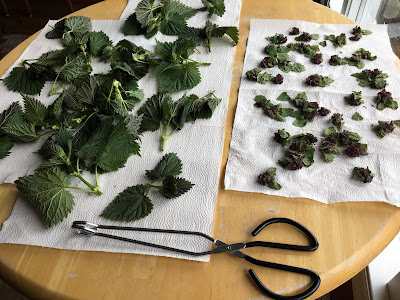 The stinging nettle (on the left, above), was gathered along a trail near our home.  These aren't called stinging nettle for no reason; the plants are covered with fine hairs that can sting you and leave a rash.  We were careful in how we gathered them so that we didn't touch the leaves with our bare hands.  We also made sure to pick only in an area where pesticides and other chemicals are not sprayed, and where dogs would not be doing their business on them.  The dead nettle (on the right, above), was gathered out of my own yard.  I carefully washed and dried all the leaves before setting them out on paper towels.  You could also rubber band a bunch of the plants and hang them upside down to dry.  Once the leaves have become dry, I'll cut them into smaller pieces and store in jars.  They can be used for making tea.  Both plants apparently have health benefits including reducing inflammation, which I will be intrigued to find out about and experiment with to see how my body responds.
Finally, the last bit of foraging I did recently on my own was to gather a bunch of dandelion flowers for making dandelion oil and dandelion salve.  Just like the purple dead nettle, I gathered dandelion from my own yard, washed them off, and set them out to dry on paper towels.  Once the flowers were completely dry, I put the flowers into a jar and poured sweet almond oil to cover.  This has then been sitting in a sunny window - it will be ready after 2 weeks.  I'll then strain out the dandelion flowers and use the oil to make a salve.  Dandelion salve can apparently help reduce skin irritation and inflammation. 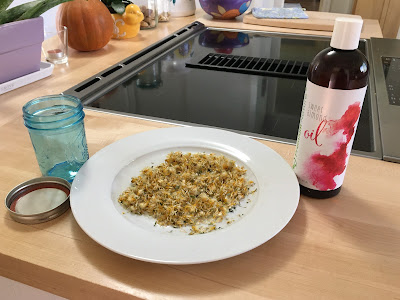 IMPORTANT NOTE:  The herbs and plants mentioned in this article have not been evaluated by the Food and Drug Administration. I'm not a doctor! This article is for educational purposes only.