Snow Storm Continues with Over a Foot of Snow

January 16, 2020
After moving to the northwest corner of the state looking for a more temperate climate, locals born and raised here told us it's unusual for this area to see much snow.  It sure does seem like we are all experiencing climate change as every year since we moved we've had major snow events.  We're currently in the midst of another one.  Yesterday, we took a tape measure around and noted there was 16-20 inches of snow depending on where you measured. 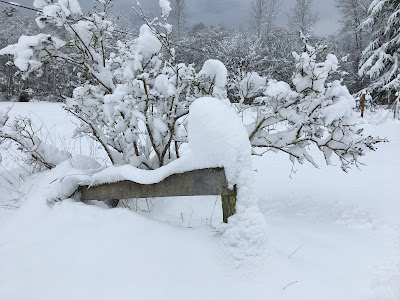 We had to dig out of the house to get to the chicken coop and the wood pile. A path about a hundred feet long had to be dug to reach both.  Our stack of wood in the garage was depleted, and getting more wood from outside required scraping a wide path for the wheelbarrow and then digging through a foot and a half of snow to get under the tarp-covered pile.  It was an adventure.

Meanwhile, the chickens stayed in the hen house all day, refusing to step out into the snow.  It was not smelling so good in there with them crowded inside for a second day, and so I covered the floor of the hen house with fresh hay. I put their food and water inside, and they were cozy. Poor girls. No eggs were laid yesterday. 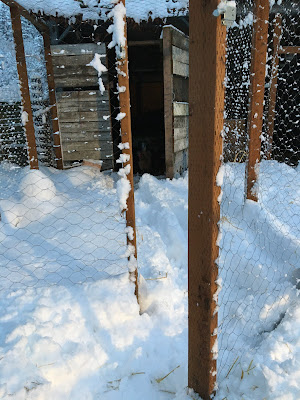 Mojo ran around like a lunatic and we enjoyed her antics until we realized she had accumulated a massive amount of snowballs to her rear end.  We thought about renaming her Snowball. 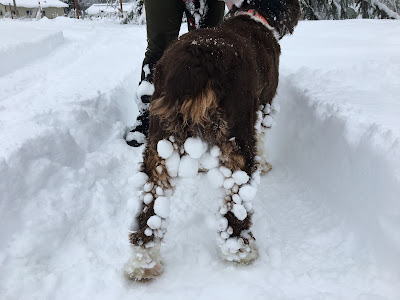 It seemed funny at first, but then one of our friends up at the barn told us that it could cause her to get too cold and suggested giving her a warm shower right away.  We took her inside and realized we would indeed have to get her under warm water in order to remove the tightly-packed snowballs that had frozen against her skin.  After a half-hour shower (it took that long to deal with it), she's okay now and being pampered like the spoiled pooch that she is.

We played in the snow and did some exploring.  The snow was too powdery to build a snowman.  But we did enjoy getting outside. 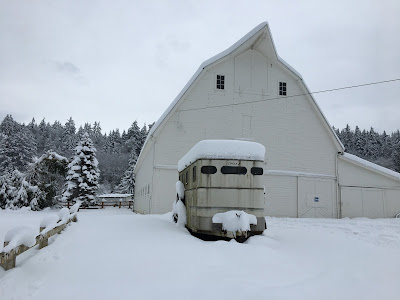 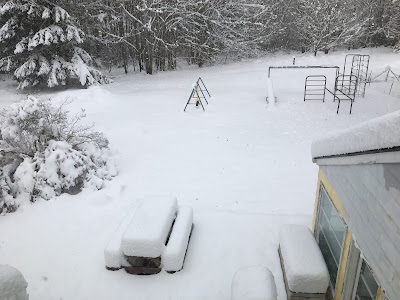 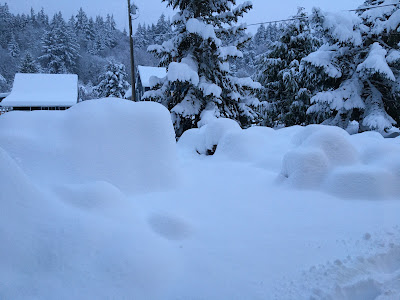 Strong winds developed last night and knocked most of the snow out of the trees, and we watched with some amount of concern.  But other than a few big limbs none of the trees around our house had fallen during the night. 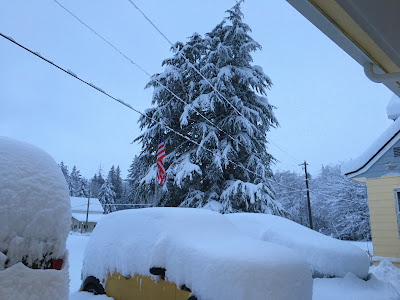 A cell tower must be out as we've have no cell coverage for the past day. The power has been flickering.  And we've kept a couple sinks dripping water during the freezing temperatures to avoid last year's folly.

Hoping you all are keeping warm and safe!