January 18, 2020
We were charmed by this vintage telephone stand that now serves as an end table in our living room. 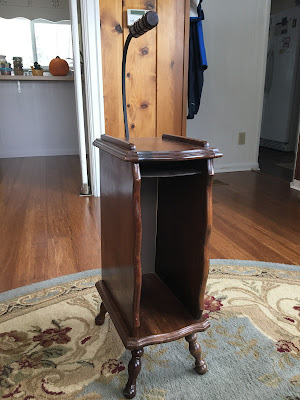 When we bought our old farmhouse a few years ago, we knew we'd need to supplement our existing furniture with a few more pieces in order to make use of all the rooms.  Our old farmhouse used to be home to a large family that owned and operated a dairy farm back in the 1940s, as well as to a number of ranch hands who worked here part of each year.  Thus there are a few extra rooms to provide space for everyone.  The spaces where we needed extra end tables included the living room, parlor, guest bedroom and a room dubbed "The Corral", a large gathering space that has become a TV room/man cave.

Rather than buying new furniture, we decided to look for what we needed from estate sales and auctions.  The telephone stand was part of an auction lot that included five items, all of which we were able to snag for only $15 total.  The other pieces of furniture in the lot included a night stand, another end table, a plant stand and a foot stool.

Telephone stands such as this one were common in the 1940s to the 1960s.  The telephone would sit on top and a phone book could go on the large vertical shelf below.  There is a smaller horizontal shelf in between the table top and the phone book shelf; I'm not sure what that extra small shelf is for.  A small address book perhaps? Pen and paper to take phone messages?  The handle that is on top was used to move the table around.  If you received a phone call and wanted to change where you were seated, you could simply lift the entire stand by the handle, phone and all, and move it to another spot.  How handy! 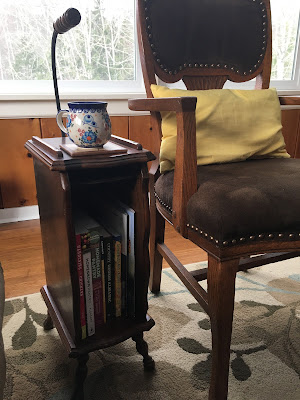 We don't own a land line telephone and so this little stand has no use for us for a telephone.  Instead, the telephone stand now serves us remarkably well as an end table. It's also a great conversation piece.  Everyone who has seen it is charmed by the strangeness of a little table with a handle.  This unusual table and the vintage wooden chair next to it, which was passed down from my mom's family, have become my spot in the living room.