December 30, 2019
Doesn't it seem like time marches forward quickly?  It's hard to believe that 2020 is almost here!  Already it's time to ring in the new year and a new decade as well. 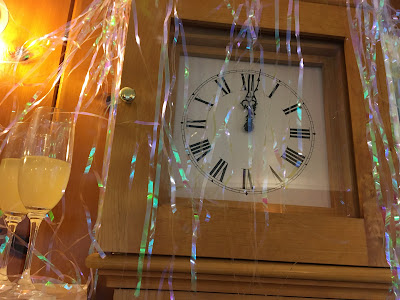 As the new year approaches, we find ourselves pondering change. We were sitting in front of the fire yesterday morning talking about the new year and considering whether or not we should set any New Year's Resolutions.  I wasn't sure that I really wanted to participate in the annual tradition, since I don't like setting ourselves up for failure by deciding on lofty goals that are nearly unattainable.  But I wanted to hear what the other members of the family had to say.  I was pleasantly surprised by their suggestions.

The first idea that was offered was to travel more.  This came from my daughter.  But where would we go and why? I know she'd like to travel around the world (who wouldn't?), but we aren't ready for that type of vacation in the next year.  My husband suggested that every few weeks, we go on an outing to somewhere we haven't yet been - setting a limit to no more than 2 or so hours away.  There are many areas in this corner of the state that we haven't yet seen, after having moved here just a couple years ago.  This goal seems achievable and we all agreed we'd look forward to it.

After that, the conversation about resolutions was dropped for a little while.  Then, last night the three of us played several games of Uno.  Afterward, the idea of playing a family game twice a month was suggested by my husband.  A great idea for another resolution!  His suggestion reminded me about a method my brother's family had developed to organize their family game nights. They had made a simple "spin the wheel" with the names of each family member on it.  Whoever's name it landed on was the one who got to pick the family game. Also, whoever won the honor of picking the game last time got to spin the wheel next. Perhaps we'll put together the same kind of game night wheel.

Over the past week, I had been pondering the idea of trying to be more purposeful and focusing on what is meaningful in the new year. I'm one of those A-type personalities who stays busy and feels compelled to keep a task list, marking off achievements throughout the day. While that helps to keep me organized and on track, I sometimes feel like I've lost out on something important.  Is it enjoyment of those around me? The list is sometimes a distraction from noticing and appreciating what's happening here and now. It seems that the family's ideas about traveling and playing games together would help me with my own goals as well.

Have you set any resolutions or goals for 2020? We would love to hear about them - feel free to share using the Comments section below!