September 22, 2019
We absolutely love home canned tuna and smoked tuna. Every year, my husband would go out fishing 50 miles offshore with several of his friends, and it wasn't uncommon for him to bring home as many as 10 large tuna that we would then can and smoke.  Since we moved, however, it's been a couple years now since he's had the opportunity to fish offshore, and as a result he's been considering whether to simply buy fish for this purpose.

On Wednesday afternoon, my husband called me from work to let me know that he'd just arranged to buy 50 pounds of freshly caught albacore tuna from a local commercial fisherman.  The fisherman was going to arrive at our door in a few hours, and so I put together the cash to pay for the fish.

The fish we were purchasing was already cleaned and loined.  We've usually had to clean the fish ourselves.  I was really glad that the fish would already be cleaned, because let me tell you that dealing with the carcasses of 10 large fish is kind of a challenge.  One year after carcing out the tuna he'd caught, my husband put the carcasses in our compost bin.  The odor of those carcasses breaking down filled the entire neighborhood for days.  He finally had to buy bags of lime and dirt to cover the fish bones and guts to speed the process of them breaking down. (And we had to apologize to the neighbors...they thought something died in the bushes somewhere.)

Fifty pounds sounded like a lot of fish, and so I went about gathering every cooler we owned.  I set them all outside the front door.

As it turns out, all 50 pounds of fish fit inside one giant cooler. We covered the bagged tuna with ice and shut the lid. The next few days were a blur of canning and smoking. 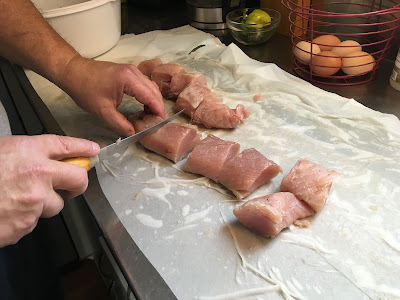 My whole house smelled like fish.  My Scentsy burners and the essential oil diffuser could not keep up with the fresh fish odor.  Even I smelled like fish.  At one point as I was putting another batch into the pressure canner, I realized there was fish stuck to the front of my shirt, dried on my arms, and there was even fish underneath my fingernails. Ugh.  So much fish, I felt like I was bathing in it.

Half-way through the 50 pounds of fish, I ran out of canning jars.  I had canned 65 half-pints and we had also smoked 16 loins and put them into the freezer. We'd also eaten tuna fish sandwiches, tuna penne pasta and tuna seafood stew.  We served fresh smoked tuna along with other hors d'oeuvres when friends came over. 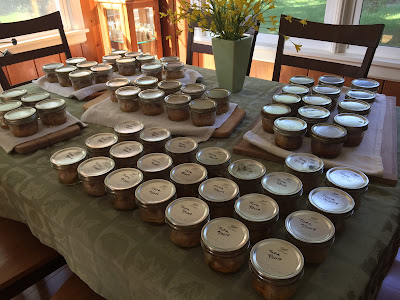 I couldn't deal with the tuna any longer, and so we vacuum packed the rest (about 25 more pounds of fish remained) and stuffed it in the freezer.  Later on, we'll pull some out to can or smoke.

Canning tuna is not too complicated.  It does require a pressure canner.  We pack the tuna raw into the hot jars and then the only other two ingredients we add to each jar is 1/2 teaspoon minced garlic and a pinch of salt (be sure to use canning salt).  The jars are then processed for 100 minutes in the pressure canner.  To prevent breakage, the other important thing to do is wait to remove the lid until after the canner has cooled a while.  (Having a jar break inside the canner is a real bummer - the remaining jars get pretty yucky and you have a mess to clean up.  Taking it more slowly with the cooling process helped me avoid any further breakage.)

There is nothing quite like home canned tuna. Due to the raw pack method we use in canning our tuna, the oil that is in a jar of tuna comes from within the fish.  The tuna fish is firm with large fillets of meat and the flavor is incredible. Once you've eaten home canned tuna, it's hard to go back to any of those commercial varieties you can buy at the grocery store. 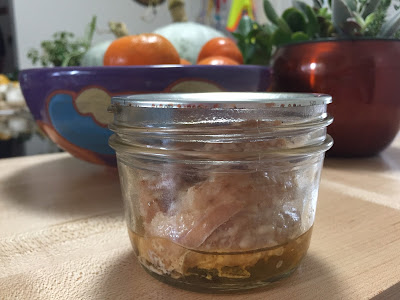 The cellar is filling up now with a wider variety of home canned goods. 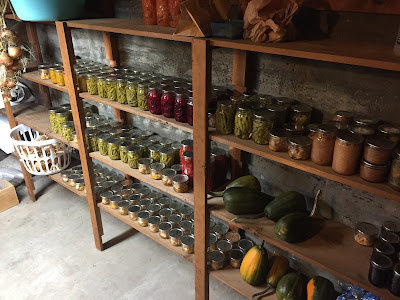