August 28, 2019
This year I gave "Three Sisters" companion planting a try, planting my pole beans in the same row with the corn alongside the squash. The harvest from all three crops has been amazing.  Green beans are growing 8 feet in the air, their vines emerging over the tippy-top of the corn stalks.  None of the plants have had issues with garden pests. 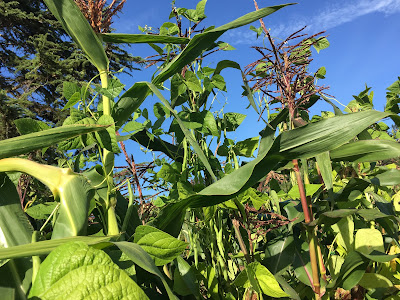 The practice  of Three Sisters planting is centuries old and comes from Native American tradition.  I didn't need to use a trellis for the pole beans since the bean vines had corn stalks to climb.  Typically when planting pole beans in with the corn, it's recommended to give the corn a head start, waiting to plant bean seeds until the corn is a few inches tall. I didn't do that. I planted everything at the same time during the first week of May.  Beans and corn sprouted up together simultaneously and as they grew the bean vines wrapped around the corn, climbing up and over it, sometimes climbing out into the air and across to the second row of corn. 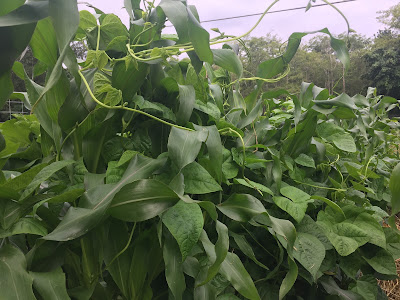 Squash is growing adjacent to the two rows of corn.  Impressively large squash leaves are providing shade and keeping the ground moist.  In the middle of the corn row, I placed all of the straw mulch that I salvaged from the potatoes that I harvested in July. We have been able to reduce the need for water in the garden thanks to the mulch and shaded ground. 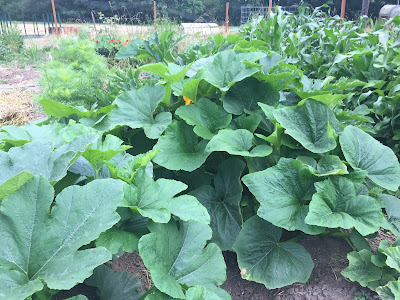 Thanks to the enormous harvest of green beans, I've been canning all summer long. So far, there are 58 jars of green beans in my cellar along with 12 jars of dilly beans. 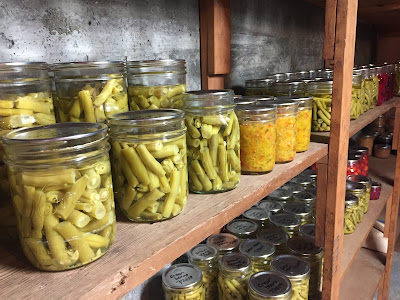 Growing pole beans on corn has definitely been the easiest way to grow these crops.  I haven't had to do much of anything to help the plants along.  We're just now starting to find a few ears of corn ready for harvesting in among the stalks.  In a week or two, we should be able to harvest all the rest of the produce from the corn and beans, and the squash is winding down now as well.  This method of Three Sisters planting is one that we will be doing again next year, and we'd recommend it to others who enjoy gardening as well.