June 16, 2019
Before we lost our rooster, one of our hens became broody and so we let her do her thing with seven of the eggs that had been laid that day.  She had a mix of eggs from all our chickens to sit on -- Rhode Island Red, Buff Orpington, Gold Sex Link, Ameraucana, Gold Laced Wyandotte and Blue Laced Wyandotte.  And so began the 21-day journey from eggs being laid to chicks hatching. 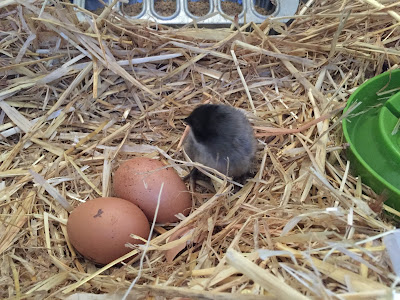 For most of the three weeks, the hen -- her name is Cheech (we also have Chong, both of which were given to us for free from an ad we answered on Craigslist) -- did her best to stay on the eggs.  We decided not to separate her from the rest of the flock because we wanted to make sure the chicks would be accepted once hatched.  Also, leaving them all together meant that the other hens wanted to lay their eggs underneath Cheech in the nest with the other eggs.  This allowed Cheech time to go eat and drink.

The one mistake we made was allowing her to sit on the eggs in a precarious location.  She had picked a pile of hay that is on top of a cinder block wall that divides two sections of the coop.  This eventually became a problem because with hens coming and going from the nest, the eggs sometimes would roll out onto the ground.  I kept picking the eggs up and putting them back, doubtful any would actually hatch after a while.

One egg cracked about two weeks in, and I discarded it.  Another egg rolled out and became too cold to put back in, so away it went, too.  One egg mysteriously disappeared. At this point, we moved Cheech to a metal feeding trough so no more eggs could roll away or disappear. 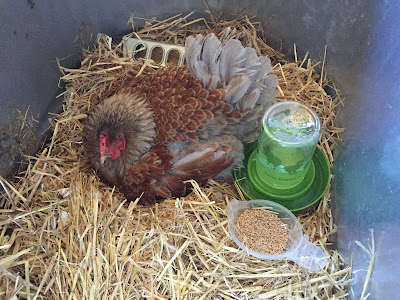 On the 21st day, a chick was hatched.  The poor little chick was weak, sickly-looking and didn't last long.  On day 22, another chick hatched and so far is doing well. (Knock on wood.) 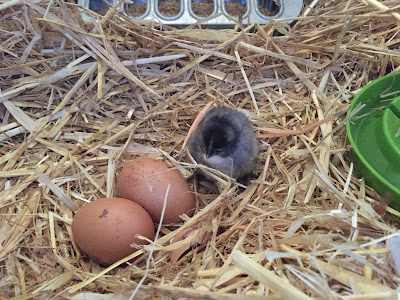 Before this little chick had hatched, I heard peeping noises coming from the eggs.  My daughter and I listened this morning to see if the remaining two eggs are peeping, and they are.  We had no idea chicks could peep inside their eggs before hatching.

It seems like the straw we're using as bedding is difficult for the little chick to walk on, and so we're going to buy pine bedding today and see if that helps.  I might just add 4 inches of the pine bedding on top of the hay, so that it provides a really cushioned surface.  My main worry is that the chick won't be able to eat and drink with mama sitting on top of her.  But, I guess these little creatures somehow survive in nature and so it's probably best to let them do what they will, and see how it goes.  We're hoping that there might be a rooster among these three little chicks, assuming all hatch. 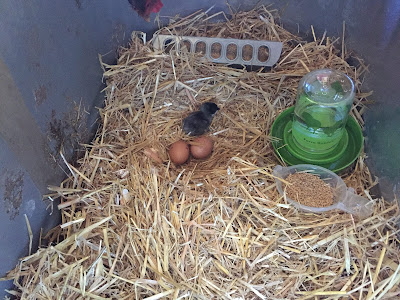