June 09, 2019
A bald eagle swooped down into the chicken run today.  We weren't home at the time; we heard about it from our neighbor, Brian, who was out on his riding mower and saw the eagle as it flew in after the chickens.  Brian also noticed the hens had made it to the hen house while the rooster distracted the eagle. 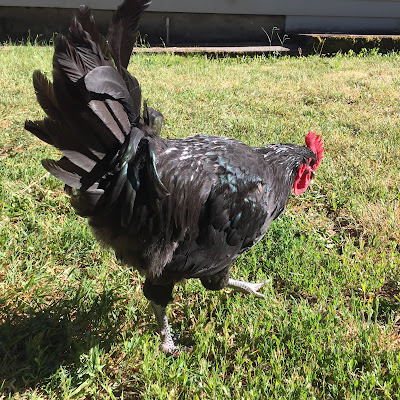 Poor Captain Rooster didn't stand a chance.  It was so awful to come home and find his lifeless corpse out at the end of the chicken run. He was plucked clean. His beautiful iridescent black feathers had blown all over inside the chicken run.  I guess the eagle didn't have enough room for takeoff because he left the rooster there on the ground uneaten.

We were all surprised at how sad we felt losing such a pain in the butt as that rooster.  Not a day went by that Captain Rooster didn't try to gouge us with his spurs.  He was a bloodthirsty bugger when it came to humans. But he was very good with the hens, always protecting them and chattering to them whenever there were treats.  He even carried treats over to give to his girls.  And he had a funny wing dance he did around the hens to protect them.  The hen house has been unusually quiet today since he passed.  Captain Rooster will be missed.