April 03, 2019
It's time to plant cool season crops in Washington's northern Olympic Peninsula. I spent the morning double-digging the rows at one end of the garden for today's planting.  Last year, I used the Victory Garden double-digging method for my garden beds and was pleased with the results in terms of how productive the garden was. Despite how much effort is required to create a deep garden bed, I thought I'd give it a go this year, too.  My neighbor, Brian, gave us a trailer load of tree mulch after he had to take down a fruit tree this past winter, and so the mulch is going on the paths in the garden. 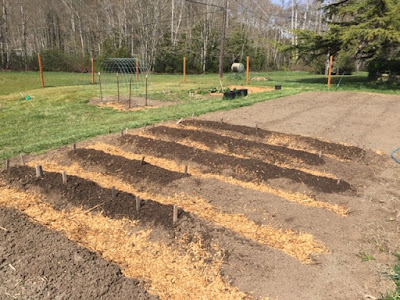 The only change I'm making to the use of the double-digging method is to create narrower rows and paths.  Where in the prior year my beds were 4 ft. wide with 3 ft. wide paths between each row, this year I opted for rows that are 2 ft. wide and have 2 ft. wide paths in between. I found that last year it was hard to manage weeds around the plants, and so by making narrower beds I'm hoping to fill the bed with the growing plants and thereby eliminate space for weeds to grow.  Additionally, narrower paths in between the rows reduces space for weeds. One added benefit of this change is that I will have more beds in the garden this year. 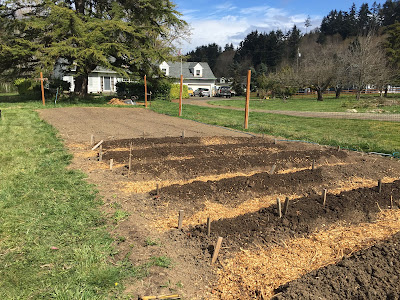 After digging the 6 rows and moving 15 wheelbarrow loads of tree mulch, I'm feeling pretty sore all over. But the results are exciting to see! 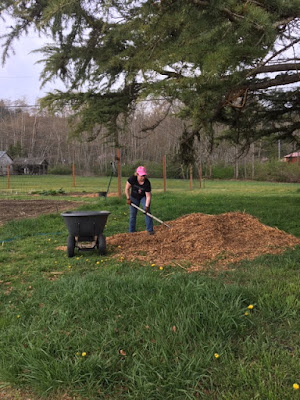 What cool season plants did I put in today?  Here is the list:

Additionally, I added tree mulch around the blueberry and raspberry plants, and also around the rhubarb, sage and parsley.

Potatoes can go in the ground now as well.  I have the potatoes curing on a drying rack after having cut them apart so that there are at least 2 good "eyes" on each piece.  Once the cut ends have hardened over, they will go into the ground.

Here is my garden diagram for this year.  I can't wait until the summer crop can be planted in May, so that the rest of the garden can be filled in! 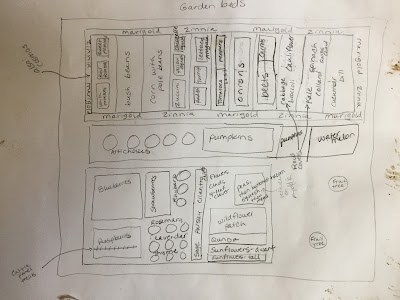 The diagram has a little bit of mud on it from having it outside during planting.  Also, I've already deviated from it slightly.  I realized when I started planting that I should have grouped cool season crops together on one side of the garden, so that I would only have to dig into place those beds right now.  The rest of the open expanse of garden can then be tilled again before I plant the summer crops.

We've had mild temperatures the past few days, ranging from 42-65 degrees F each day.  Rain is expected each day for the next week, and so hopefully the garden can be watered by Mother Nature.  We still have not fixed the outside water spigots. (You may recall that over the winter, the water lines going to our outside water spigots all froze and burst under the house, and so we had to cut and cap those lines as a short-term solution).  Today, in order to water in the new seeds, my husband helped me run a hose from the laundry room sink out to the garden.  Hopefully using the sink is just a short-term solution.