Homemade on the Farm

April 14, 2019
We're trying to produce more of our own food on our farm.  So far, that's meant a large vegetable garden, fruit trees, and eggs from our lovely flock of chickens.  Now, we've decided to stop buying bread, crackers, tortillas, chips and other baked goods at the store, and instead bake our own. 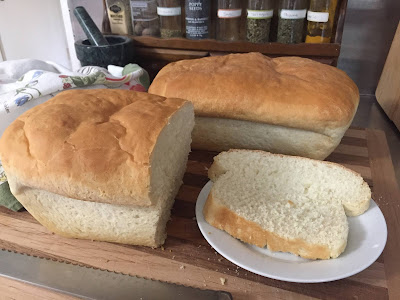 A bit more planning is involved, specially since I'm the one whose idea this was and who enjoys doing the baking.  I work full time, and so this means finding time on the weekend to do most of the baking that we need to get us through the week.

We had a major chocolate craving on Friday night, and so my daughter and I baked a beautiful chocolate cake. 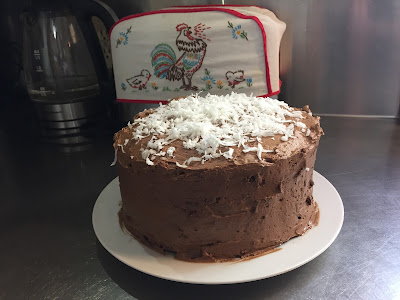 This was a vintage recipe from the Betty Crocker cookbook - "Black Midnight Cake" with cocoa frosting.  We had a little bit of shredded coconut left in the fridge, and so we sprinkled it in the middle of the cake (on top of the frosting that is in the middle) and also on top. Mmmm...so yummy.  I put it in the fridge in my big plastic cake carrier so it will keep all week.

I also made a loaf of sourdough bread using sourdough starter.  Only three ingredients in this bread -- flour, water and salt.  It's already cooled and sliced, and in a bag for using for sandwiches and toast for the first few days of the week (at left in the photo below).  For tonight, we are having a spicy Asian chicken soup and homemade dinner rolls.  I found a great recipe from Living Traditions Homestead that can be used to make hamburger buns, hot dog buns, dinner rolls and bread.  I've already made hamburger buns with the recipe and they were fantastic.  Below is the dough for dinner rolls to go with tonight's soup. 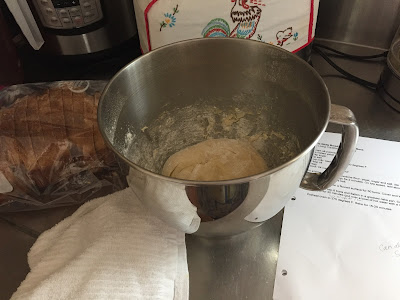 After rising, the rolls looked amazing as I put them into the oven. 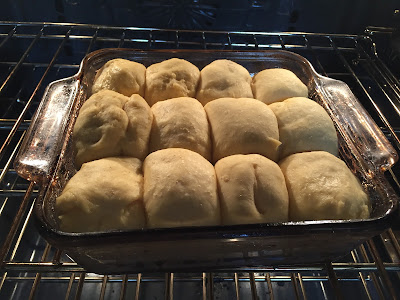 It was now time to make soup.  Tonight's soup is a variation of one that I've been making for years.  I sauteed onions, then put in a teaspoon of garlic pepper paste.  Then I added a quart of frozen homemade chicken broth from my freezer.  Once that melted, I added about 1 cup of chopped baby bok choy and then put a lid on the pot.  After it boiled for a couple minutes (to allow the bok choy to become tender), I took it off the heat and added 2 cups of vegetables -- this time, sweet white corn and french style green beans, along with a quarter cup of chopped cilantro.  Then I seasoned the broth: salt, ginger powder and garlic powder.  Last, I added diced cooked chicken. 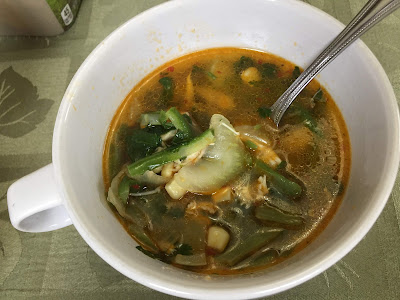 To help me with my goal of baking everything from scratch, I ordered a variety of flours from Bobs Red Mill yesterday:
There is enough baking flours on the way here to keep me going for at least a couple months.   I'm especially excited for the semolina flour to arrive so that I can begin to experiment with making pasta.